The women in Iran we never see

Iran, for photographer Hossein Fatemi, is a nation of two halves. There is the public half that the government wishes to promote, the pious and religious one. Then there is what Fatemi describes as “the semi-hidden part of the country” that exists behind closed doors.

For years, while Fatemi worked for a news agency with ties to the government, he could only take images that showed his country the way its rulers imagined it. Away from work, like countless other young Iranians, he lived a different life involving mixed-gender parties and other supposedly Western pursuits.

Fatemi thought a lot about this contrast while living in Afghanistan, where he moved in 2009. He decided to return to Iran to capture all of its diversity. The resulting series of photographs illuminate both halves of the country, as well as the space where the two clash and accommodate each other. There are chador-clad women, but also a naked prostitute; child members of an Islamist militia, a rock band, and women with bare legs languidly smoking cigarettes.

Fatemi also shows Iranians pushing the boundaries of what is normally acceptable in public, such as the two women shooting pool in an all-male venue. Other women acquiesce to the rules requiring that they wear headscarves, but choose colourful ones that conceal as little as possible. Boys and girls go hiking together or flirt in cafés. So many Iranians are young, and through social media or officially restricted satellite TV can connect with the outside world. It’s human instinct, says Fatemi, to test the limits of what a society permits.

These were not easy photographs for Fatemi to take. It took months just to get access to a gym where women were lifting weights. Some subjects worried about being identified and insisted their faces not be shown. Others cancelled appointments because they were afraid of losing their jobs. The results suggest Fatemi’s efforts were worthwhile. It is a stunning and provocative portrait of a country. The only tragedy is it is unlikely ever to be published or exhibited in Iran. 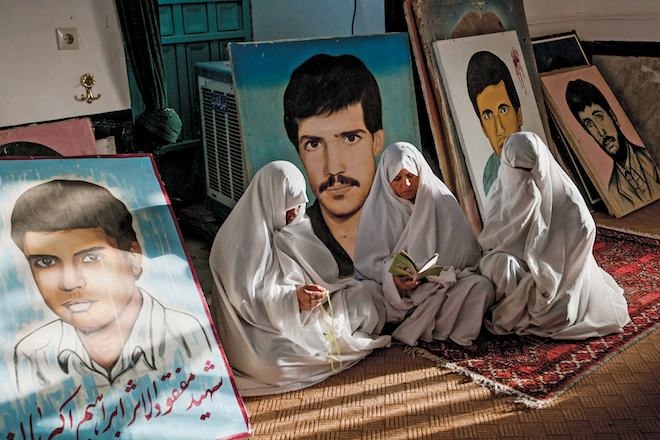 The mother of Martyrs, those who died in the Iran-Iraq war, praying at the graves of their sons and surrounded by their portraits. (Photo by Hossein Fatemi)