The year of quinoa?

Just when you thought the super power food was over, the UN's Food and Culture Organization pulls you back in

The Food and Culture Organizations of the United Nations has announced that 2013 “is the international year of the quinoa.”

Proposed in December 2011, “the government of Bolivia, with support from Argentina, Azerbaijan, Ecuador, Georgia, Honduras, Nicaragua, Paraguay, Peru and Uruguay, and FAO, and approved by the United Nations General Assembly,” the organization’s objective “is to focus world attention on the role that quinoa’s biodiversity and nutritional value plays, in providing food security and nutrition, the eradication of poverty in support of the achievement of the internationally agreed development goals.”

Those are all good reasons to make 2013 the year to celebrate the grain that everybody knows isn’t exactly a grain (it’s an edible seed), but did the organization miss the quinoa boat? Isn’t quinoa so 2008? Or ’09? Or ’10?

Maybe not: In 2011 Canadian Living reported that searches for quinoa by their web visitors–approximately 2 million Canadians a month–increased by 153 per cent from February 2010 to 2011, and a whopping 311 per cent in March. And just last September, Chatelaine posted a Quinoa 101 on their site. Plus, four of the six English paperback cookbooks that Amazon.ca offers with the word “quinoa” in the title, were published in 2012, including the Canadian The Vegetarian’s Complete Quinoa Cookbook in September, and The Quinoa Revolution in October. (Man, I’d be pretty smug if I were R. Wood, who published Quinoa, the Supergrain: Ancient Food for Today, in 2002.)

The New York Times was writing about quinoa as early as 1913, in an article about how the department of agriculture was introducing 400 different plants to the U.S., in which it recommended quinoa as a good substitute for spinach.  “It is grown on the slopes of the Andres, where its seeds are used in soups and prepared very much the same way rice is,” the article says. “But in France, its leaves are favoured in the dry, hot season when spinach can not be grown.” (Leave it to France to one up the gastronomical trends of the Western world.)

The same article details other fruits and nuts, like those of the ink tree from Mauritius and the candle tree from China. (Watch for them in a Whole Foods near you in 2015.)

So it appears that quinoa is not going anywhere. And that’s a good thing, as long as the Bolivians–who produce most of the world’s supply of the high-protein food–can sort out recent land disputes. In fact,  I’m eating quinoa for lunch all week. See my recipe below (adapted from the French Women Don’t Get Fat Cookbook and I just depressed myself writing that.) 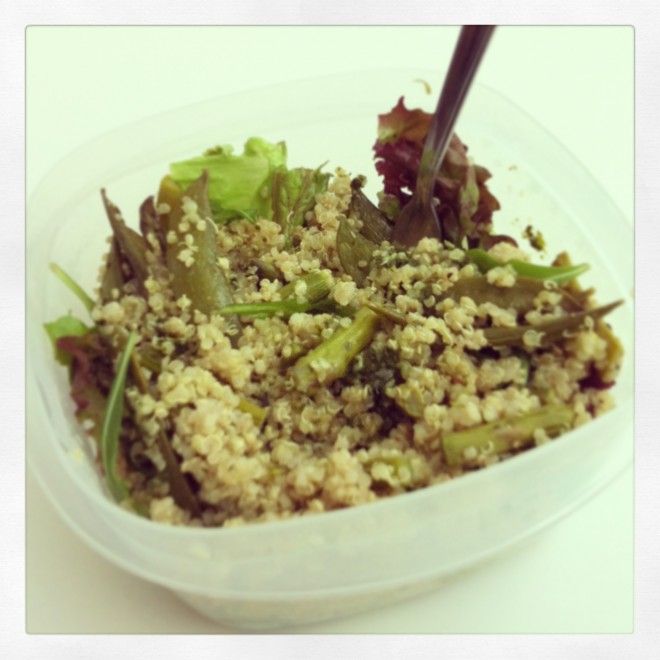 Cook two cups of quinoa according to instructions. Meanwhile, roast a mixture of green vegetables (why not try snap peas, asparagus and broccoli?) in olive oil, salt, pepper and maybe some dried chili flakes. Prepare a little bowl with a teaspoon each of ground cumin and coriander, two tablespoons of olive oil, salt and pepper. When the quinoa is cooked, add a tablespoon or two of butter, the roasted vegetables and your spice mixture, and thoroughly toss. When it’s cooled down, add as much baby arugula or any old type of lettuce–plus any chopped up herbs you might have lying around, like parsley, cilantro and mint–into the mix. Voila. You just made five days of healthy lunches.