The year of the rat 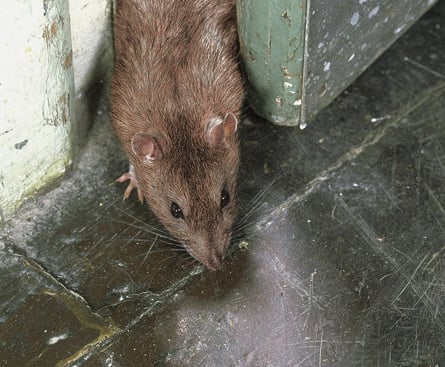 Halina Siekanowicz doesn’t usually name the rats she is trying to kill, but she had to admire “Robbie’s” ingenuity. It was a typical extermination job at a Toronto business for the owner of Lady Bug Pest Control. Robbie, the last rat standing, had a route that included skittering along a length of pipe. Siekanowicz set out a piece of sausage as bait. Her preference is a fine link of Polish from a good deli, not the chemical-laden junk they peddle as sausage at the supermarket. “If it’s not good, they’re not going to eat it,” she says. “Rats are not so stupid.” In front of the bait she laid a glue trap that should have held the rodent fast, but Robbie had other ideas. She watched in fascination as Robbie gnawed at the wall above the trap, until the glue was coated with debris. “Then he walked away on the piping, over the glue trap and got the sausage as a reward,” she says. “We have nothing compared to their brain.”

It took three weeks, but Robbie is no more; done in by a poisoned sausage. But there is always another rat. Behind Robbie is a writhing, rutting, ever expanding horde. Indications are they are massing for what threatens to be a creepy winter, in Vancouver, in traumatized Swift Current, Sask., in apprehensive Alberta—and especially in Toronto, where a summer garbage strike left the population fattened and fecund. While the weather is mild, they are content in their outdoor burrows, munching on gardens, fallen fruit, compost and garbage. But winter is coming, says Siekanowicz. “Sooner or later, those buggers are going to go inside of the houses,” she says. “And thanks to them, we’re going to have more jobs. We cannot complain.”

Veteran Toronto exterminator Art Bossio, owner of Advantage Pest Control, is also predicting a winter invasion. “They’ll start looking for homes, factories or restaurants—that’s when we’ll get the brunt of the calls,” he says. “But even now our calls have probably doubled over what they were last year.” Sometimes the warning signs pop up in a most unpleasant fashion. Bossio has had at least a dozen calls this year from people who’ve lifted the lids of their toilets to find rats bobbling in the bowl. Some are drowned, others are frantically treading water after crawling up the drainpipe. “They can swim up to two miles,” says Bossio. What they can’t do is clamber up the slippery porcelain. “Once they’re in there, they’re basically stuck.”

Two civic workers’ strikes in seven years have boosted Toronto’s rat population, but city policies have also been a boon for rodents, says Bossio. “We used to get our garbage picked up twice a week, now we’re down to once every two weeks,” he says. Recycling requirements turn porches and garages into domestic waste-sorting centres. “That creates extra food for the mice and rats,” he says. “And composting is a big contributor.”

In Vancouver, house-hunting rats have been an unsettling part of the downtown landscape this summer after being displaced by demolition and construction projects. The city is now considering a bylaw mandating extermination before structures can be demolished. Vancouver’s domestic rat population, though, is in no danger. Their numbers rose after a civic workers’ strike in 2007 provided a smorgasbord of uncollected garbage. Added to that is a steady influx of foreign rodents, fresh off the freighters in port and eager to gnaw off a piece of the Canadian dream.

Perhaps no place in the country is more fixated on rats this summer than Swift Current. Residents and merchants have complained since June of increasing rat sightings. Ike Reimer, owner of the local Safari Inn, went public with claims he personally caught 54 rats by late August, and he’s presented a petition to the city demanding more be done. For his efforts he was given a tongue-lashing by several councillors and Mayor Sandy Larson, who complained he was giving Swift Current a black eye and damaging the local real estate market. But Reimer’s concern was shared by hundreds of citizens at back-to-back meetings in late August. A news release from the local Cypress Health Region said the calls it fielded “range from rat sightings to bites in people’s own beds.” It warned rats can carry bacteria, viruses, and parasites that cause such infections as salmonella, hantavirus, rat-bite fever and leptospirosis, and pose a safety risk by chewing wires.

In a later release, Cypress Health escalated the infestation to a war footing, urging citizens to report all rat sightings to the city so their locations could be plotted to locate their nests. It issued a brochure, “Five Steps to Help Eliminate Rats,” with subheadings infused with the same take-no-prisoners spirit that Brad Pitt’s Inglourious Basterds are using to hunt Nazis at the local cineplex: “1. Look for evidence. 2. Clean up. 3. Starve them. 4. Shut them out. 5. Wipe them out.”

Such tactics have served neighbouring Albertans well since the first rodents—creeping west through Saskatchewan—reached their provincial border in 1950. The government, concerned with the risk of disease and with an eye to protecting its grain stores, gave the agriculture department blanket authority to repel the invasion. It instituted a public education program and created a control zone—a heavily patrolled no-rats land along its eastern flank. In 1952-’53, unfettered in that era by environmental constraints, it laced a swath of land from Medicine Hat to Provost with 63,600 kg of arsenic trioxide.

Today, rat control officers are the first line of defence along the border zone, aided by a strategic use of blood-thinning poison usually mixed with grain, says provincial agricultural inspector Robert Pulyk. More drastic measures are taken, though, should poison fail to eradicate rats infesting, for instance, a row of hay bales. In those cases, the farmer is called in to move the bales as rat control officers, armed with small-bore shotguns, fan out in a semi-circle. “If a rat comes out of a bale, they’ll shoot it,” says Pulyk. As the final bales are lifted they may be blazing away at as many as 20 fleeing rats. “The only good rat is a dead rat and it’s the last rat that you’ve got to get. None of them can get away.”

Alberta, thanks to its $500,000 annual anti-rat budget, is essentially rat-free, but there are chinks in the province’s armour. When a lone rat was discovered in late August, and terminated with extreme prejudice in a northwest Calgary neighbourhood, one might have assumed from local new reports that a public enemy on par with John Dillinger had met its end. “I have great confidence in our pest control people because they have years of experience,” a proud Premier Ed Stelmach told the Calgary Herald, “and they’ll get every rat that there is in the province.” Pulyk says the rat probably hitched into the province in a rail car or camper.

The battle for Alberta is a rare human victory against a worthy opponent. In cartoon terms, the rat is Road Runner writ large and hapless humans (with the possible exception of Albertans) are Wile E. Coyote­—our laughable plans of destruction doomed to fail in the face of a superior being. This relationship is wonderfully captured by Toronto author Jerry Langton is his 2006 book, Rat: How the World’s Most Notorious Rodent Clawed Its Way to the Top. In conversation, as in his book, Langton vacillates between revulsion and admiration for their adaptability and their survival skills. “People have often asked me about rat intelligence,” he says. “What people are describing as intelligence is really more alertness, which is advantageous for a prey species. And cunning, which is advantageous for a scavenger.” They have bad eyesight, but great hearing and a remarkable sense of smell. They have teeth harder that some grades of steel, so chewing into your home or compost container is no challenge. Langton, too, awaits a post-strike infestation in Toronto, for sheer force of numbers is their great advantage. It is mathematically possible for a three-year-old rat to have given birth to 43 litters of 516 rats. Add in children and multiple generations of grandchildren and she can be responsible for 16,000 offspring in a year, and up to 100,000 over three years, he calculates. “Truly, it is the animal we can’t get rid of, the only one capable of challenging human hegemony of the planet.”

It’s not for want of trying. We poison them and shoot them. There is even a sub-genre of urban American anglers who fish for rats in back alleys with conventional fishing tackle. We slander them in literature and in most every movie requiring an ick factor. There are nice things about rats, too. Lab rats—run through mazes, injected with drugs and otherwise tormented—yield many health benefits for humans, if not for rats. Hundreds of rats in Africa are trained to sniff out land mines. They make fine pets (though that’s illegal in Alberta). And a recent study in Baltimore found they are loyal to their neighbourhood. East Baltimore rats mix with their own kind, as do west-side rats, much the way city residents do. They communicate using high pitched sounds beyond human hearing, and even laugh, says Baltimore researcher Lynne C. Gardner-Santana. “It’s a good thing that nature did not afford rats with opposable thumbs,” she told a local newspaper. “I truly believe that rats, like cockroaches, could survive a nuclear holocaust.”

A case can be made that rats are no worse a pest than the rabbits overrunning the University of Victoria campus this fall. But bunnies are cute, and rats are rats. Langton wrote an entire rat book only to conclude he really can’t stand them. “Logically and analytically, I’m afraid of the disease they can spread. Viscerally, I’m afraid of their presence. They’re awful. They’re horrifying. Their teeth, their tails, ugh.” Even Siekanowicz, a professional, has rat issues. “I cannot tell you why but I don’t like them,” she says. “Maybe because they’re smarter than me sometimes.”