This Alberta man brought the Montreal bagel craze to Korea

Wayne Kim fell in love with Montreal's signature food from three time zones away. He brought it halfway across the world. 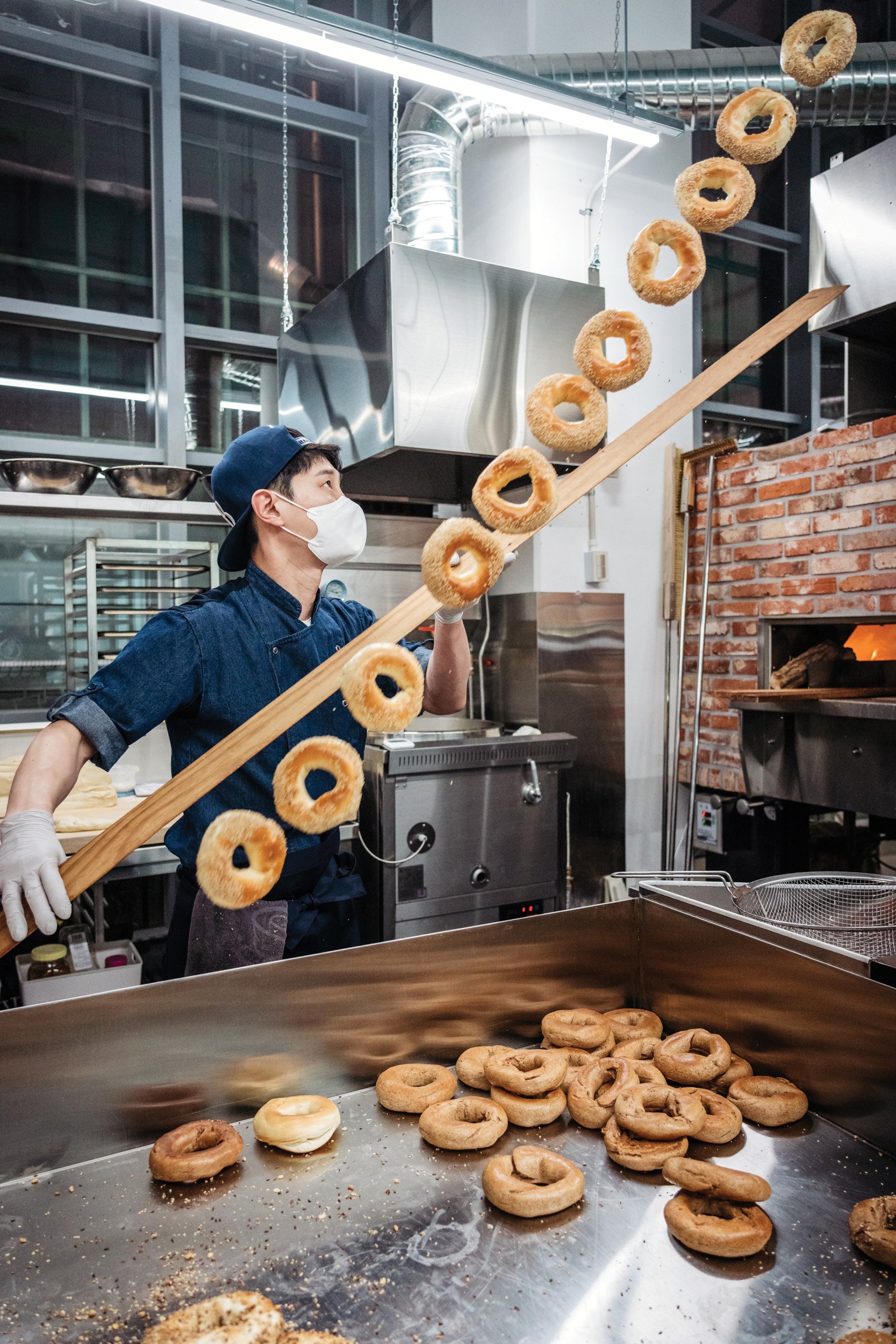 Wayne Kim fell in love with Montreal bagels from three time zones away. As a teenager in Vancouver, he wasn’t much into the bread-like bagels sold in most stores. But Kim, whose family came to Canada from Korea when he was in high school, was dazzled by Siegel’s, a Montreal-style bagel shop in Kitsilano: the big wood-fired oven, the smell of honey water, the bagel’s crunchy outside and chewy interior. The budding entrepreneur in him, meanwhile, marvelled at the lineups of customers keen for a dozen poppy or sesame.

READ: Inside the fight to save New Brunswick’s maple syrup

In his early 20s, Kim headed to Montreal to learn the craft: hand-rolling dough rounds, boiling them in sweetened water and flipping them from oven to bin using long, wooden paddles. With a small bank loan and financial help from his dad, Kim transported the idea to another western city largely unfamiliar with Montreal’s gift to cream cheese and lox: Calgary. He opened Wayne’s Bagels there in 1996 and now runs two farmers’ market stands, with a third coming soon, in addition to his flagship bakery downtown.

Since the early 2010s, Kim had dreamed of sharing the recipe with the country of his birth. In late January, he made that dream a reality. The first Wayne’s Bagels in Seoul opened in the affluent Gangnam neighbourhood (yes, that Gangnam), complete with brick oven and decor liberally flecked with maple leaves.

Kim was initially deterred by his sense that Koreans were clueless about bagels. But there’s been a surge in coffee-shop culture in the country in recent years, with both the bagel and its hole-y cousin, the doughnut, rising in popularity. Too many of the doughy circles passing as bagels in Seoul contain ingredients like milk and butter, Kim says—abominations to any bagel purist. “I want to educate the people in Korea: this is authentic,” he says of his product.

Seoul, whose population density and foot traffic is far greater than Calgary’s, offers Kim hope for a massive business hit. He already has franchisees lining up to replicate Wayne’s Bagels around the city, and aspires to have 40 locations within two years.

Adapting the concept for a market on the other side of the Pacific, though, has presented challenges. Most Korean diners don’t know Montreal’s claim to bagel fame, so Kim instead emphasizes the Canadianness of his bagels. Moreover, the floors of typical storefront properties in Seoul, which are perched above underground parkades, can’t support the weight of brick ovens. Kim adjusted by going with half-brick, half-stainless steel models that, though less authentic, bake bagels that taste roughly the same. And he can’t make poppy-seed bagels: the seeds are illegal in Korea because they can also be used to grow poppies for opium.

RELATED: Seniors in Vancouver’s Chinatown are battling poverty and racism to put food on the table

Kim was delighted with the reception the Seoul café enjoyed in its first few months of business. Daily sales soared to levels his Calgary shop took years to reach, and locals have been giddily sharing pictures of the big bagel oven on social media. What’s more, in a city full of working, studying and vacationing Canadians, he’s discovered a ready-made baseline clientele: expats longing for a crunchy, wood-fired taste of home.

This article appears in print in the May 2022 issue of Maclean’s magazine with the headline, “Going full circle.” Subscribe to the monthly print magazine here.