Early education: this is not a field trip

More schools are adopting programs that put kids outside to learn, even in the rain

Dozens of parents lined up at the doors of the Sooke School District office on Vancouver Island’s West Coast one chilled, rainy evening last February and spent the night under tarps and blankets and with thermoses of hot chocolate—all to land their children spots at a pilot kindergarten program, one that’s part of a quiet revolution in early childhood education spreading across the country. The movement’s main feature? Kids playing in the great outdoors.

In public schools, private schools and preschools from Roachville, N.B., to Red Deer, Alta., and Sooke, B.C., teachers and early childhood educators are rolling out programs where young children spend a big chunk of time exploring the natural world—in some cases, all day, every day, even through the dead of winter. At a time when free play is in a well-documented decline in Canadian kids’ lives, these schools represent a new push to see children leave the formal classroom behind.

In the “nature kindergarten” program at Sangster Elementary School in Sooke, four-year-olds spend each morning in the forest or at the beach, mostly engaged in what’s called play-based learning; teachers develop lessons around whatever captivates the kids: the clouds, pine cones, the anatomy of worms. No one asks when is it time to go inside, says Frances Krusekopf, a public school principal who spearheaded the program’s creation and hired a childhood educator, on a $25,000 salary funded by grants, to help the regular teacher. Amid the heavy downpours of winter, Krusekopf says the kids “notice the puddles, they notice the quantity of worms has gone up.”

Wrapping up year 1 of a two-year experiment, the program is an example of what are typically called forest schools. There are at least 15 in Canada, mainly private and including Tír na nÓg in Roachville, N.B., which will charge $9,500 per year, with more set to open this fall. The organization Forest Schools Canada launched this year to help shape the mostly grassroots movement. It offers training programs, encourages colleges to add forest-school-derived courses to the curriculum and is creating a network for sharing best practices.

Forest schools, while avant-garde here, are not new in Europe. The concept of teaching young kids in wildlife settings began in Sweden in the 1950s, became a hallmark of Danish and German early childhood education in the 1980s and has gained momentum worldwide. There are 200 schools in the U.K., 700 in Germany, and some in Japan, China and the U.S. 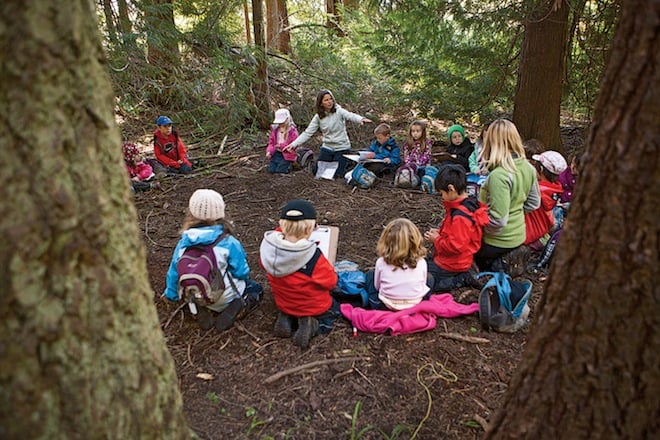 As CEO of Forest Schools Canada, Marlene Power has become the de facto leader of the movement in Canada. She fields calls and emails at her new office in Ottawa, many from people keen to start their own programs. Power launched one of the country’s first private forest schools outside Ottawa in 2008. She’s used to skepticism about a program where preschoolers, bundled in snowsuits, spend much of the winter in the snowy forest. It’s “the best season by far,” she declares (black-fly season is the worst). “That’s when you can see tracks, animals, birds and bird feeders,” she says, and teach the kids why birds fly south, or about the oxygen in their breath as it hangs in the cold. They build fires and warm up in tents. Only when it drops to -20° C do they spend some of the day indoors.

Yet scientific research into the benefits of play on a child’s development is sparse. University of Victoria developmental psychologist Ulrich Mueller says only a handful of quality quantitative studies exist. He’s among a group of researchers studying the Sooke program’s impact on children by testing their motor skills—a major determinant for whether kids will take up sports later on—as well as their levels of activity, and ability to self-regulate emotions and actions. The data will be compared to a control group of regular kindergartners. The study was meant to run the full two years of the pilot, but was restricted to one year when funding fell through. The results will be out this fall.

But parents inclined to believe in the benefits aren’t waiting for the proof. Candice Hall’s son is part of the first cohort in Sooke, and she spent that February night on the school district’s doorstep to ensure a spot for her daughter this fall. She says she’s already seen the evidence in Ryland, 6, who now thinks nothing of sitting in wet sand to watch the waves, and who hasn’t demonstrated a single behavioural problem at school this year, despite a history of such incidents stemming from a speech delay. The biggest drawback for parents like Hall is the laundry. At one Forest School launching in Roachville in September, each kid will need two extra sets of weather-appropriate clothes, right down to the underwear. In Sooke, one extra set is required. “You just have to be organized,” says Hall, and look on the bright side. “When they come home really dirty,” she says, “that means they’ve had a good day.”