Maclean's preview: Boys will be girls

This week's cover story: Inside the world of gender fluidity 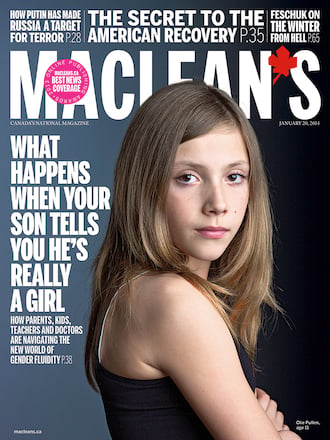 Since the summer of 2012, Olie Pullen has kept in her bedroom closet a Wonder Woman costume, which she loves, but has struggled to actually wear. The plan had been to don it on Halloween two years ago, but when that day came, Olie, now 11, chose to be a vampire instead. Dressing up in the red and blue costume would have exposed her at school and around her Montreal neigh- bourhood in a way that didn’t feel right yet: Olie was, after all, born a boy. Oliver.

When he was a toddler, at his own insistence and to the surprise of his parents, Oliver began playing with princess dresses and dolls. He wore skirts, first at home and then out, along with glittery shirts and skinny jeans, and eventually grew his blond hair long. Recently, Oliver started wearing a padded bra and taking hormone blockers to suppress male puberty. He had his name legally changed to Olie, and only responds to female pronouns. Oliver the boy is now Olie the girl. And for the first time ever, she’s comfortable. “The best part is that I feel I’m in the right body,” says Olie. “I feel like, well, I feel good.”

This week’s Maclean’s cover story looks at a small but growing number of Canadian children who are transitioning from their gender at birth based on their sexual anatomy to something else—boys to girls, girls to boys, or to a more ambiguous identity—in the way they dress and behave.

While gender fluidity, as this phenomenon is known, is gaining acceptance among families, researchers, educators and doctors, who used to see this as a psychiatric problem, the real-life experience of these children do not always reflect these significant institutional improvements. Children with gender fluidity have among the highest rates of isolation, depression, self-mutilation and suicide of any population.

In this riveting account of personal discovery and the quest for affirmation, Canadian children and their parents share how they’ve navigated the challenges of gender fluidity so far, and imagine what the future holds.

Look for the full story on newsstands now, or buy the digital edition.