To my Grade 10 English teacher: ‘You were the sanctuary I needed to survive those dark high school years’

KC Hoard thanks the teacher who taught him how to write 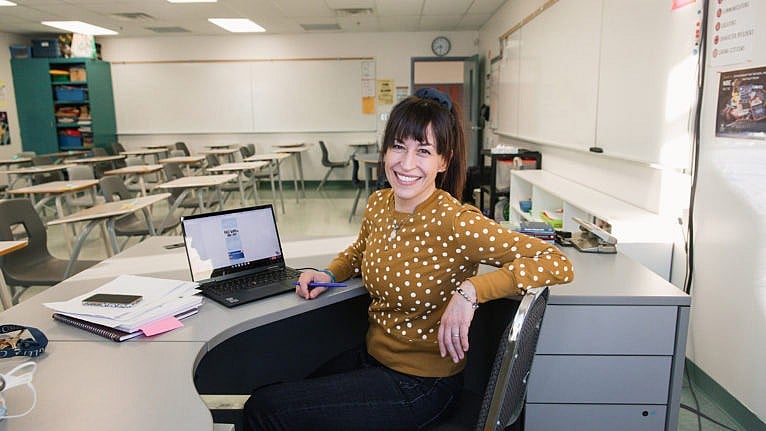 Earle in her classroom in January 2022 (Photographed by Kaja Tirrul)

When we walked into your English class one morning in October 2013, you were in a terrible mood. You assigned us new seats based on our last names, dividing us into two groups. Those in one group were given a book and a homemade sugar cookie. You threw the rest of the books on the ground and looked at the second group: “Pick them up, quickly,” you said, curtly.

You treated the first group kindly throughout the class, but you continued ordering my group around, barking at us if we made a peep. At the end of class, you revealed it was all an act. You were preparing us to study Night by Elie Wiesel, a memoir of his time in Auschwitz.

I was 15 years old and attending a Catholic school in the suburbs of Ottawa. I was bookish, lonely, chubby and obviously gay.

Your class was my raison d’être. There, I felt like I belonged; I felt challenged and inspired. I remember you taught us George Orwell’s Animal Farm and took great pains to explain the Communist revolution upon which the story is based. Cloistered in the suburbs, I had no idea there had been a revolution in Russia, and I was so engrossed in your lessons that I had to learn more.

READ: To my birth mother: ‘I’m not searching for who I want to be anymore—I’m discovering who I am’

You and I had a lot of conversations around that time—about injustice and literature, and how the latter is a powerful weapon against the former. I was enchanted by your personality: your infectious, wry wit and your palpable love for words.

I remember nervously writing essays for you, agonizing over each word. Every paragraph was another opportunity to impress you. I had it in my head that I was the best of my cohort because I read books and knew big words. All my other teachers were dazzled by my vocabulary, and I figured you would be the same.

I should have known better. When you returned my essay on Night, it was blue and all marked up.

“It’s great, but too flowery,” you told me after class. “You’ve got potential, but it’s hidden beneath words you don’t understand the meaning of.”

It stung, but you were right. You were the first person who had taken my writing seriously enough to criticize it. My predilection for over-the-top wordplay became a running joke between us, and every time I threw some fluffy adjective into my writing, I’d hear your sarcastic voice in the back of my head telling me to cut it out.

MORE: 35 years later, a student writes: ‘It’s because of you that I became a teacher’

I’d often spend breaks in your class reading, doing homework or forcing you to talk to me. You were the sanctuary I needed to survive those dark high school years. There were moments when I felt so low I didn’t think I’d make it to tomorrow. But I knew that tomorrow meant another session in your class, where I would get to learn more about my place in the world.

I’m 23 now, and I’m living in your hometown of Toronto, writing full-time. Ms. Earle, you’re still in every word I write, in my bones and in my heart.

This article appears in print in the March 2022 issue of Maclean’s magazine with the headline, “Dear Ms. Earle.” Subscribe to the monthly print magazine here.

FILED UNDER: Before you go Editor's Picks education Life