Infinite patience reveals a hidden world under the North Pacific 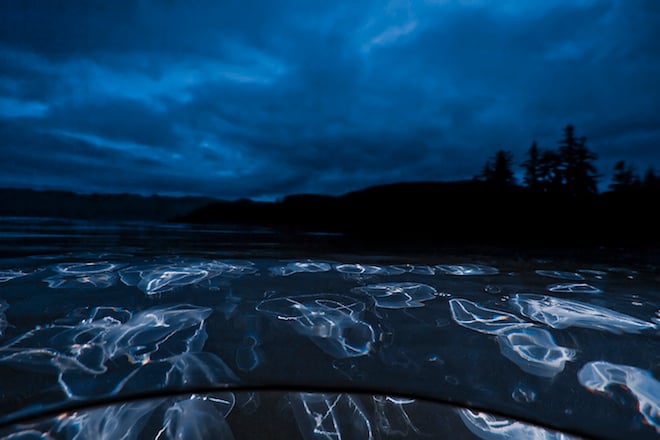 Cross jellies enter quiet bays at night, but disperse again when daylight returns; this photograph was made shortly after sunset, as these Hydrozoan jellyfish were returning to the quiet bay to spend the night. Mitrocoma cellularia; Hussar Bay, Nigei Island; Queen Charlotte Strait, British Columbia.

Standing on the shore of British Columbia’s Adams River, as battered, exhausted sockeye salmon finish their 500-km journey from the Pacific to spawn and die, can reduce a person to tears. To stand in the river—appropriately at last light—as New York-based photographer David Hall did, captures the poignancy and power of the last act of their life cycle.

“To me, they were determined, magnificent, beautiful,” he says. Between 1995 and 2010, Hall made a dozen trips to B.C. to photograph the magnificent denizens of the North Pacific. The result, Beneath Cold Seas, published in North America by Greystone Books and the David Suzuki Foundation, is one of the rare books dedicated to the subsurface life of a cold-water destination.

It’s a world few of us will ever witness. The water is green, the light dim and the quarry elusive.

Well, there are exceptions. He was engulfed by a bold pack of sea lions while diving near Hornby Island. “This group surrounded me and examined me so thoroughly that I began to worry about possible injury,” Hall says. “Their size and strength, combined with curiosity, could have resulted in serious problems.”

Fortunately, the only outcome was some remarkable photos. Hall often used strobe lights to bring out the sort of colours we usually associate with sea life in more tropical climes. To ward off the cold, a dry suit was essential. “If there is a secret to how I managed it, it is only this,” he says. “It took me 15 years to get enough good photographs to make the book a reality.”