Want to publish your own cookbook? There's an app for that

Smitten Kitchen. Orangette. The Wednesday Chef. If you’re someone who loves cooking and baking, there’s a good chance you’ve heard of these well-known food bloggers who not only have successful careers outside the blogosphere, but have also garnered book deals due in large part to the wild popularity of their websites.

Countless food bloggers and home cooking enthusiasts have daydreamed about authoring a cookbook; a glossy paged, artistically photographed volume of the recipes and personal stories that encapsulates what their culinary endeavours mean to them in their daily lives. But for the vast majority of amateur cooks, this dream is largely out of reach, due to both affordability and publishing logistics.

Bakespace.com, a grassroots online community that encourages recipe sharing and connecting to other foodies worldwide, has created a free app called Cookbook Café that aims to remedy this. A self-publishing platform that works as both an iPad app and a web-based e-book, it is designed to facilitate the creation and selling of a personal cookbook.

Initially inspired by the use of recipe-gathering from multiple sources by non-profit organizations for fundraising, Bakespace.com founder Babette Pepaj noticed the limitations in design and circulation faced by many such groups and sought to create a publishing tool that married an easy-to-use formatting system with stronger distribution potential.

Enhancing professional credibility with an increased web presence and adding earning potential to a blog or website are two reasons to spur business-savvy food bloggers to app action. But there are also personal motivations. Take Jodi Lewchuk, an editor in the Canadian publishing industry, for example: she’d been looking to create a collection of her grandmother’s most beloved Romanian recipes to share with the whole family. After learning about Cookbook Café at a TECHmunch food bloggers conference in Toronto, she decided to give the app a try. Her resulting book, Favourites from Ana’s Romanian Kitchen, has already enjoyed several downloads, and she is now reaching a wider audience than she’d anticipated.

Authors can customize their cookbooks with their own photos, videos and other forms of media, while a universal format simplifies the design process. “All an author has to do is upload recipes, accompanying text and multimedia, and we handle the rest,” says Pepaj. Cookbook Café also offers a dedicated cookbook marketplace that’s accessible both online and via the iPad app, plus a search tool that categorizes each recipe individually by type, ingredient and author. 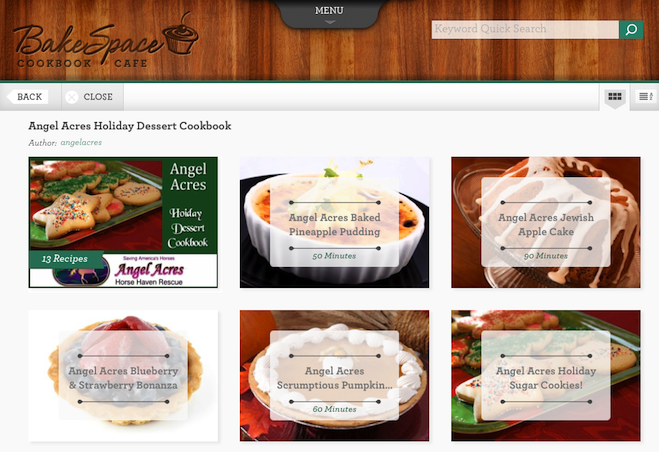 Authors are also furnished with a widget for each cookbook they publish, which can be added to their blogs or websites to cross-promote sales. “Finding an audience for your cookbook can be a challenge if you’re not a big-name chef, so we really focused on marketing and discoverability when we built the platform,” says Pepaj.

In her effort to “democratize cookbook publishing,” Pepaj has made the app available for free. And the final e-book’s price is determined by the author within a range of $0.99 to $9.99 in one dollar increments. Bakespace.com receives a commission only when a book has been sold.

The creative possibilities, for professional and amateur cooks alike, seem endless. And that, as Martha–a cookbook publishing wonder who’s been at it since 1986–would say, is a good thing.