Bikers versus hikers: B.C.'s war of the woods

On British Columbia's busy mixed-use trails, a battle for space is raging, complete with tripwires and snares 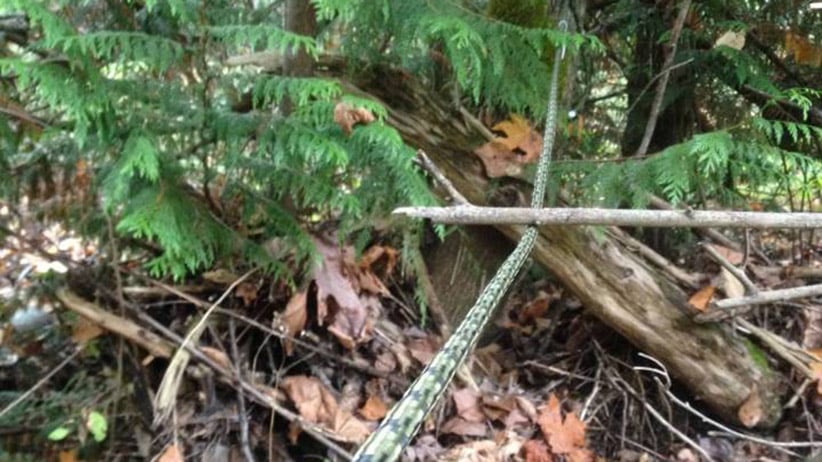 From the seat of his bike, Sterling Eyford thought he saw a shadow. It was an early August morning in 2013, and Eyford was riding along Kings Road in Victoria, headed to his 5 a.m. shift at the CBC. Even his high-powered light could not pick out the black electrical tape strung across the road. The 35-year-old radio producer came flying down a hill, then hit the tape. He flipped over his handlebars and landed on his jaw, fracturing it in two places. The impact nearly severed his spine. His neurologist was stunned he was not paralyzed, given the extensive damage to his vertebrae. He kept grabbing Eyford’s thigh—“You can feel that? Are you sure?”

Eyford, who was riding a popular cross-town cycling route, was one of a growing number of cyclists, hikers and mountain bikers being snared in traps in B.C. The dangers have been most evident in the province’s woodland parks, where hikers and bikers are increasingly jostling for space and tensions are running high. Last week, the RCMP arrested a 64-year-old woman for setting traps on the renowned mountain bike trails on Vancouver’s North Shore. Police stopped her at 5 a.m. as she emerged from the woods, allegedly after laying rocks and logs across the steep, slick rainforest trails on Mount Fromme; RCMP are crediting two bikers, who collected video evidence from infrared cameras they had hidden in trees high above the trail, with her arrest.

Cam McRae, founder of North Shore Mountain Biking, an online magazine, said the pair, who wish to remain anonymous, took action after repeated complaints that debris was being laid on the trail, increasing danger to bikers: “If you come around a blind corner, you have no ability to stop,” says McRae, 49, a pioneer of the radical, freeriding North Shore style of mountain biking. “The trails are so steep and so fast.”

Elise Roberts, a 59-year-old who leads seniors walks in the area, does not condone the behaviour of the woman but understands her frustration: “This issue is only going to escalate if policies are not put in place to separate hikers and mountain bikers.” Roberts is “horrified” by the media’s treatment of her: “She’s being demonized for allegedly taking the law into her own hands to, I suspect, protect her safety on a multi-use trail.”

Record numbers of British Columbians are flooding the province’s trails to hike, snowshoe, ride dirt bikes and exercise their dogs. Some were former hiking trails, now designated as mixed use. “It’s getting crowded,” says Mike Nelson, a board member with the Squamish Off-Road Cycling Association. Confrontations are becoming more frequent. 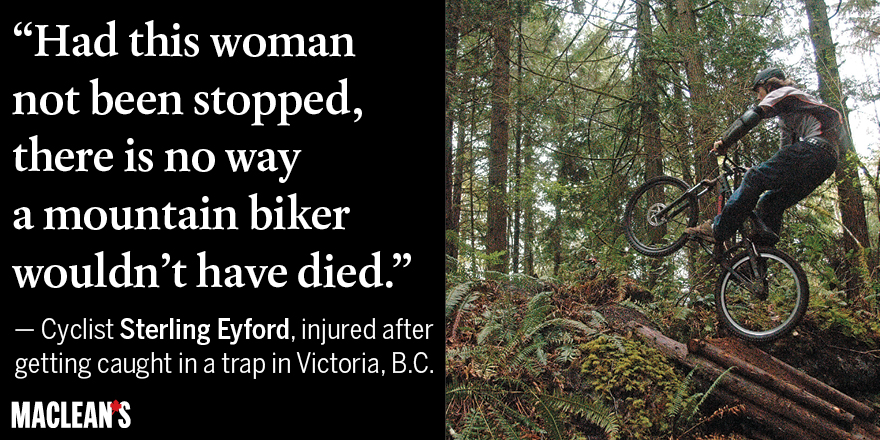 In 2013, B.C. authorities issued a warning after a rash of close calls with tripwires and booby traps: A Victoria mountain biker had his throat cut by a steel wire strung across a cycling trail. An eight-year-old girl was clotheslined on a Chilliwack trail. A labradoodle and then a jogger were snared by crude, ugly traps laid on the Grouse Grind, a popular hiking trail in North Vancouver. In Merritt, in B.C.’s Interior, a pipe bomb was found at the trailhead of a popular path used by dog walkers, hikers and cyclists. It was set to explode when the gate was opened. Across the border in Oregon, a psychiatrist pleaded guilty to assault in 2013 for stringing nylon cords between trees and planting nails in the ground. He told a forest ranger he did it because “he did not like downhill mountain bikers.”

But the fight has been most heated on Vancouver’s North Shore. There, a labyrinth of dark, wet trails over rotting trees, thick roots and hunks of granite have been cut into the mountainside, redefining what is possible on a bike and spawning a $30-million bike and tourism industry. Monica Craver says she has been repeatedly attacked online for her opposition to the encroachment of bikers onto area hiking trails, where they have damaged frog and mushroom habitat. Recently dubbed “the spawn of Satan” on Twitter, she has been the subject of online forums with titles such as “Monica Craver needs to get a life.” “These bikers are bullies,” she says. Craver believes the woman arrested by the RCMP was simply trying to protect herself and the trails she loves.

Eyford views actions such as hers differently. He will need surgery later this year to remove a vertebra. He still can’t feel his jaw and hands, which have permanent numbness. “These people are acting maliciously, laying traps so cyclists break their necks. Had this woman not been stopped, there is no way a mountain biker wouldn’t have died.”