Feschuk: Whatever happened to the great debates? 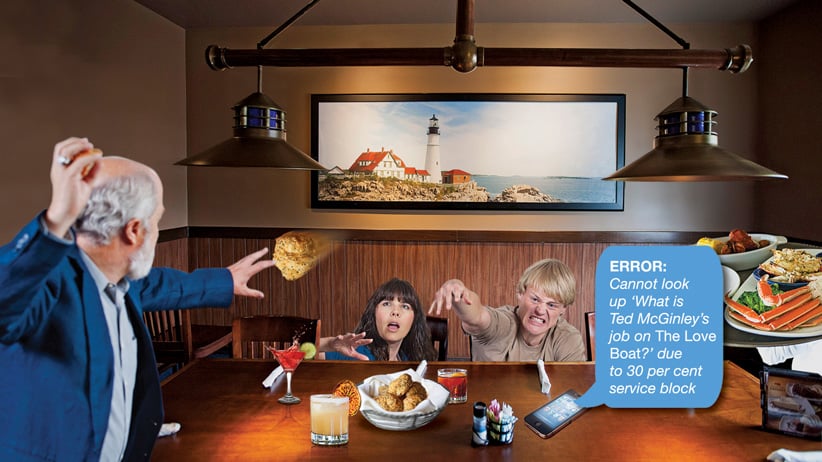 Instant access to information. Years ago, my wife and I would go out for dinner with friends and the meal would invariably devolve into a contentious debate over something obscure like the job held by Ted McGinley’s character on later seasons of The Love Boat. Nowadays, some asshat (usually me) uses his phone to end the uncertainty in a Google-fast 0.012 seconds. SHIP’S PHOTOGRAPHER, DUMB-ASS.

Being right is great. But I, for one, miss the discussion, the debate, the escalating acrimony, the profane gestures, the yelling, the shushing, the whisper-yelling, the bread-throwing and the lingering hostility that would permanently taint the friendship to the point that, years later, I simply could not get past the fact that my stupid friend had spent 90 minutes insisting it was Stephen Baldwin who starred with Sharon Stone in Sliver.

These childish, awesome moments are forever gone now. Thanks to Internet searches, I’ve had to invent completely new ways of getting into fist fights at Red Lobster.

Here’s an idea: Maybe Google could block off 30 per cent of the Internet each day—just to keep things interesting? Imagine the epic debates that would flourish when millions could no longer confirm with a few keystrokes that Adrienne Barbeau co-starred in precisely 98 episodes of Maude.

The ability to connect with like-minded individuals. The optimistic view: Technology brings people together by reminding them of their shared humanity. The reality: It mostly empowers conspiracy theorists who believe WiFi is making their teeth hurt.

In olden times, these people would be ridiculed and ostracized. Now we’ve got nutjobs galore deciding not to vaccinate their kids based on advice from such medical experts as the guy whose brother knows a lady whose yoga instructor’s barista got vaccinated—and now she’s allergic to artisanal honey and hugs.

Today, everyone with an Internet connection can find confirmation that their ridiculous fears are justified, their weird fetish is normal and their U.S. president is from Africa. Frankly, things worked better when crackpots were shunned by society and sent off into the woods to build a cabin in which they could handwrite a manifesto they’d later send to the local newspaper editor, who’d read it aloud for laughs at the company Christmas party.

Instant access to everything. When I was a teenager, my friend Jim and I would drive the 80 minutes to Toronto from St. Catharines on the whiff of a rumour that a new 12-inch import by Depeche Mode or Big Audio Dynamite had landed in town. We had to have it. Some of the best times ever came in the hours spent searching for something we’d never find. The hunt was more important than the kill.

Being connected to everyone at all times. In the mid-1990s, I worked as a reporter on Parliament Hill. One late afternoon, I ran into my boss on Sparks Street. He didn’t look happy—possibly because he hadn’t heard from me since lunch. My response was swift and convincing: “What, you’ve been looking for me? I’ve been looking for you!” (Full disclosure: My search was limited, but I can confirm he was not at the matinee screening I’d attended to blow off work.) Point is: This was the last golden age of the plausible excuse. Young kids who today are tracked like tagged wolves won’t believe it—but my kind of rank unprofessionalism used to be possible in the time before the BlackBerry ruined everything. THANKS FOR NOTHING, LAZARIDIS.

I fully realize that hating on progress makes me an aspiring curmudgeon, one who is almost certainly destined to wave my hand dismissively and say “Bah” when someone touts the benefits of the self-driving car.