When your boss is almost a psychopath

Or your doctor wants to have sex or your caregiver weasels her way into your will... 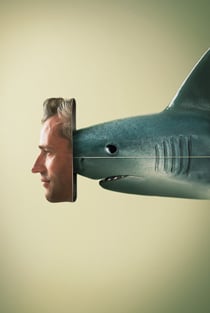 Forensic psychiatrist Ronald Schouten defines an “almost psychopath” as someone who has an unusual amount of difficulty knowing how to treat people. “Long before you get to the full-blown diagnosis (of psychopathy), there’s lots of bad stuff that goes on.”

Schouten, who has degrees in law and medicine, assesses “almost psychopaths” in his daily work. He’s co-authored a guidebook, along with former defence attorney Jim Silver, called Almost a Psychopath: Do I (or Does Someone I Know) Have a Problem with Manipulation and Lack of Empathy? It helps identify the “almost psychopath” in your midst, whether it’s your boss, doctor or caregiver.

Schouten estimates 10 to 15 per cent of people exhibit psychopathic traits, “traits that may actually help an individual become a well-regarded member of society,” the authors write. “A superficially charming and engaging personality combined with a ruthless willingness to do ‘whatever it takes to get the job done’ can be extremely useful in high-stakes pressure-filled environments.”

If you’re wondering if your own charm and ruthlessness places you somewhere on the psychopathy spectrum, the authors explain it’s not likely. “If last week you took credit for a co-worker’s success and in retrospect feel guilty about it, you are probably not an “almost psychopath”. Emotional discomfort is not something a psychopath would feel. An “almost psychopath” would likely feel deserving of the unwarranted praise and would see the hapless co-worker whose thunder he stole as a weak person who isn’t worthy of the credit anyway.”

“Almost psychopaths” are drawn to power “like sharks are drawn to chum.” They target the vulnerable and show a profound lack of empathy for others’ feelings.

Watch out at work, the authors warn. On the phone from his office in Boston, Schouten describes the real life case of “Greta,” an “almost psychopath” whose science degree and M.B.A. landed her a job at a top consultancy firm where “she ‘managed-up’ very well, winning over the senior partners of the firm.” Greta’s underlings were less charmed. She treated support staff terribly, made unreasonable demands, and pointed out her superior education.

The authors recommend confronting the person and stating your issues assertively. Avoid using apologetic words such as, “Maybe I’m too sensitive, but . . . .’ ” That language “always puts you one down in addressing a conflict, and for an “almost psychopath,” that show of weakness can be like blood in the water to a shark.”

If confrontation fixes nothing, file a report with human resources. “Framing your concerns in the context of the welfare of the organization rather than saying, ‘She’s picking on me,’ goes a long way toward establishing your reasonableness.” The key point is to get your concerns on the radar of management. “Even if the conclusion is that nothing can be done right now, there will be a track record and eventually it will catch up with the Gretas of the world.”

For the “almost psychopath” doctor, the end goal is usually sex with a patient. “If something sort of tingles and you go, ‘Hey, wait a second!’ you owe it to yourself to pay attention to that,” urges Schouten. He advises patients to research a doctor’s medical credentials. Next, check the diplomas on the doctor’s wall. “If the diploma says they went to Harvard but the web page says they went to the University of Southern Wherever, there’s a problem.”

The elderly are particularly vulnerable to the “almost psychopathic” caregiver. “In the cartoon version, the patient has died and changed their will in the last four weeks. They’ve cut out the charity, left a pittance to the family, and left it all to the young housekeeper,” the authors write. “It’s funny in the cartoons but it really does happen. Tell a relative or friend, ‘Hey, there’s this new person in my life and suddenly the relationship is ramping up. Now she’s bringing her daughter around and I’m becoming an industry for the entire family.’ ” In the end, “there are no great answers,” laments Schouten. “Get other people involved.”