Who's hungry for Top Chef Canada?

Jessica Allen is, but only if the judges chose the 'fish and fry bread' as the best 'new national dish' in the latest episode

I didn’t watch Monday night’s episode of Top Chef Canada, now in its third season, so I have no idea which of the remaining 10 chefs won the honour of creating “our new national dish”.

To be honest, I haven’t watched reality food TV in about a year now. But there was a time when it wouldn’t be uncommon for me to plan an evening around an episode of Top Chef or Hell’s Kitchen. In fact, the 2011 season finale of Top Chef Canada, which was the highest rated episode in Food Network Canada’s history, is the last time time I remember making an effort to tune in.

I may not be the only enthusiastic-turned-apathetic reality food TV viewer: The Emmy and James Beard-award winning American Top Chef on Bravo is the number one rated food show on cable. They just crowned their 10th winner (and only the second female to win) at the end of February. But their season premiere ratings peaked during 2008’s fifth season with 2.7 million viewers and has declined every year since. (Season 9’s premiere in 2011 had 1.6 million viewers.)

I can’t say definitively why I stopped. (But tasting the President’s Choice Recipes to Riches prepared dishes earlier this year didn’t help.)

Still, when I was invited last August to attend the taping of the Top Chef Canada episode that aired last night, I jumped at the chance. Maybe, I thought, this will bring me home, reignite my reality food TV fire, so to speak.

Then I took it a step further–maybe even a step too far–as if I were on a reality TV show and nominated myself for a quick fire, all-or-nothing, elimination challenge to the maximum extreme: If the dish I chose that summer day for best new national dish is also the one that judges chose on Monday night, then I will not give up on reality food TV.

But if they choose something that was served on a bun, then I’m out.

Let me explain: There was a common denominator among the 10 dishes: Did you notice that seven of them were served on a little bun? And not a homemade bun–who has time to bake a bun on reality TV?–but little store-bought buns, probably from judge Mark McEwan’s grocery store. Things on little buns are often called sliders. There was a pulled pork slider, a pork patty slider, a burger slider: It was like I was in 2008. There’s nothing wrong with little buns. But for our new national dish? Nothing about a little store-bought bun filled with meat strikes me as patriotic–even if you add a blueberry compote or maple syrup glaze to it.

Besides most of the dishes not seeming very Canadian, they had something else in common: I only wanted to eat one bite. And that’s an anomaly for this kid.

There was, however, a crab roll served on a bun, or a “Coast to Coast” as chef Danny Smiles called it, that I almost finished. It was good–and different enough from the other slider-style buns to stand out. But I’ve been told on numerous occasions from East Coast friends that you must use a plain hot dog bun for a proper lobster roll, which this is clearly an homage to. One editor at this magazine from Truro, NS said, “they HAVE to be served on a plain white hotdog bun, the ones that are split down the middle on top (not the side), and lightly buttered and grilled BEFORE you add the filling so it doesn’t get all warm and yucky.”

So I feel conflicted about Danny Smiles’s bun, which besides being neither grilled or buttered, was just too darn dense for a delicate crab salad filling. Plus, the addition of maple bacon–which I couldn’t taste–seemed like an a rather unveiled attempt to make it more Canadian. 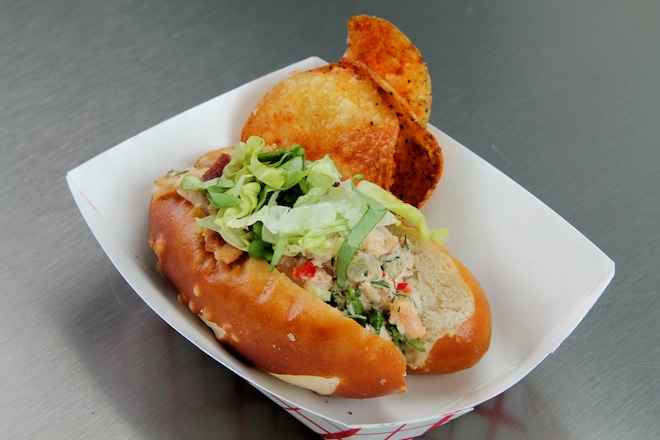 The most inventive name goes to the “beaver balls” created by chef Nicole Gomes. These pork and mushroom meatballs covered in sticky rice and maple soy vinaigrette were a nod to Chinese immigrants and Canadian bounty, she said. And there was no bun in sight! Still, I wrote “would not order these balls in a restaurant,” in my notes. (See below for my empirical observations, where I comment not only on the dishes but also, on occasion, how nice the chefs were.) 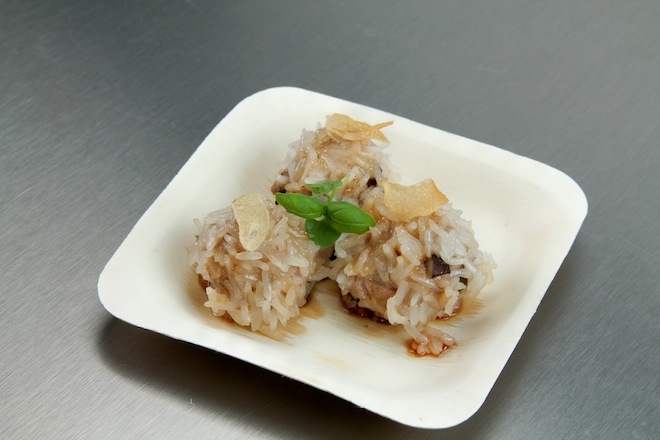 The best-tasting dish in my books, and the most inventive, was by chef Dennis Tay: His “fish and fry bread” was a piece of fried trout on top of Red Fife fry bread. The whole thing was brought together with some pickled slaw. I can still taste it–the only bite from that day that I can recall–or want to recall.  That’s the sign, in my mind, of a Top Chef. 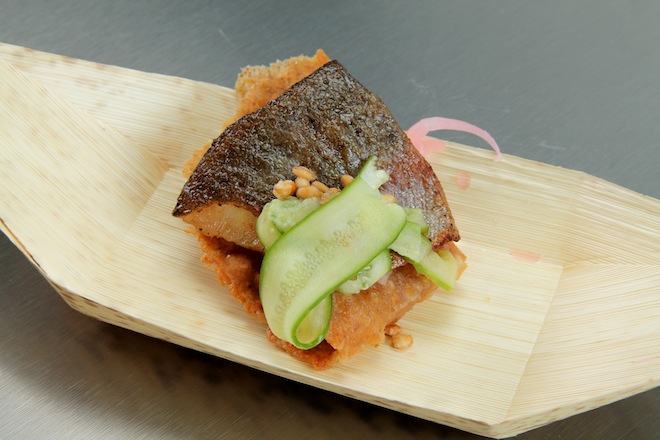 So dear Dennis Tay: I’m putting all my chips on your fish and fry bread. Good luck, kiddo. 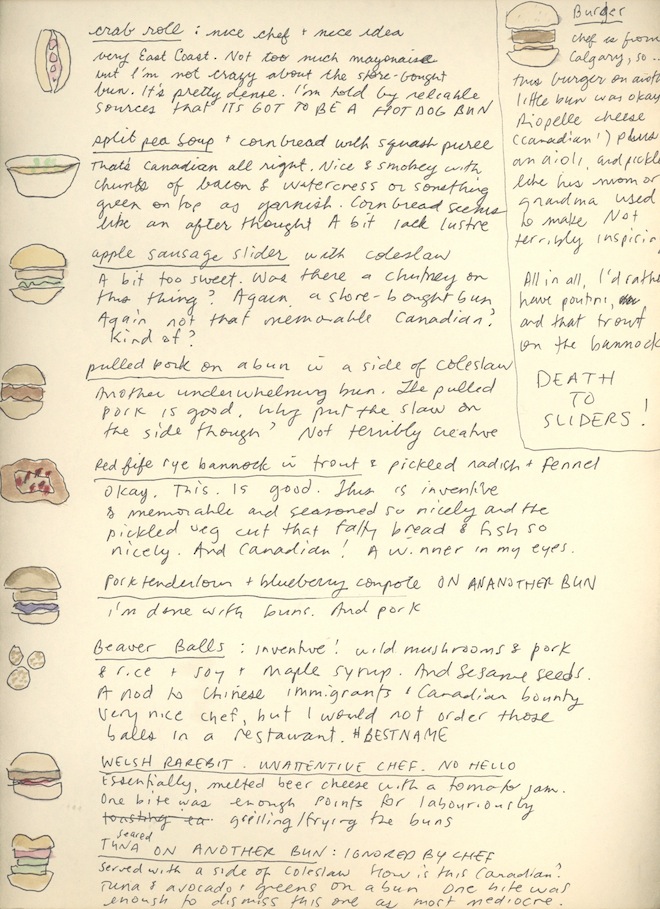