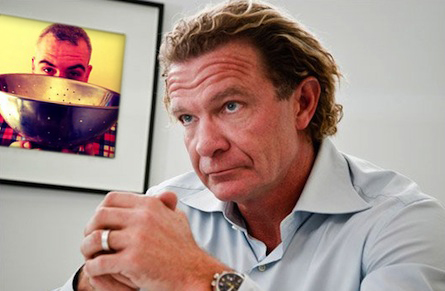 “The only thing I can liken this meeting to would be the DeNiro/Pacino scene in Heat,” writes Soto, who is actually Taylor Clarke–a screenwriter who started impersonating as a chef of a fictional restaurant called Gravitas on Twitter in January, 2012. (Routine tweets include making fun of Chef Susur Lee’s ponytail, McEwan’s curls, pop-ups, tacos, chefs tables, ramen and generally ridiculing the fictional-or-not-lifestyle of the Toronto restaurant industry.)

But Clarke/Soto thinks “it’s important for two Canadian culinary giants to come together finally in a symbolic showing of unity.”

The place doesn’t need to be fancy, insists Clarke, just “somewhere where I can where my Teva sandals and seashell necklace and not feel frowned upon.” And although Clarke has no interest in paying for the lunch, he has offered to pay for parking: “One of those $10 dollar lots though, not one of those fancy car park places,” he writes. “It’s just a car.”

Clarke, who first revealed his identity to The Toronto Star’s Amy Pataki in June of 2012, told me in an email that he’s eager to pick McEwan’s brain on the Toronto food scene and how it has evolved–not for jokes, but for actual research: Clarke is currently developing a television show with Just For Laughs called…wait for it…Chef Grant Soto.

“I’ve wanted to sit down with him for a while and interview him,” he said. “This guy has been around. I bet he has some good insight that would be very helpful.”

No word yet on whether or not McEwan will accept Clarke’s offer to go for lunch–and pay for it. But prospects are looking good: just moments ago, real chef Mark McEwan began following fake chef Grant Soto on Twitter.