Why a good steak is rare in Calgary

Good meat is plentiful, of course, but dry aging to enhance flavour is hard to find 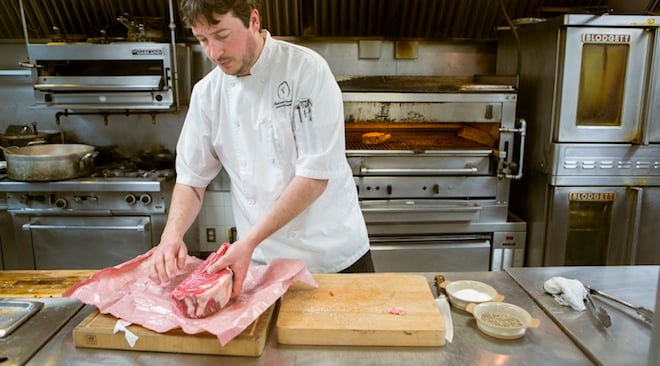 Newcomers amid the throngs of tourists descending on Calgary for the Centennial Stampede should brace themselves for the unexpected. For example, visitors from sophisticated Toronto may struggle with the realization that their mayor is not a hick. And culinary enthusiasts from everywhere will be pleasantly surprised to learn that dinner out in Calgary is now something to look forward to. Unless, of course, they went to Cowtown hoping for a good steak.

I know, I know—such a caveat seems unthinkable. But imagine this: you are in downtown Calgary, settled in at the lively bar of a convivial, rustic Italian restaurant called Mercato, awaiting completion of your order of their ne plus ultra bistecca. Hungrily watching the open kitchen, you see a chef drop a massive steak on the grill, and listen to its enticing sizzle.

Then you notice the meat is emitting a small wisp of steam. The beef begins to visibly shrink. The wisp of steam builds to great wafts, and the steak shrinks some more.

What finally arrives on the serving board in front of you is beautifully presented. The thick slices fanned out across the board alongside the bone are a perfect, succulent medium-rare within and charred without. It has been seasoned generously with sea salt and olive oil, and topped with a mound of arugula and a grilled wedge of lemon. The side dishes and everything else seem perfectly fine. Except for the fact that the steak itself looked to be no more than two-thirds the size of what had landed originally on the grill.

Attack it with a knife and fork and you find that the fibre of the musculature in its fatty cap breaks apart easily into individual strands. And an even more obvious sign that the beef was aged wet in a Cryovac bag instead of dry on a hook comes when you pop some in your mouth and chew. The stuff is tender, yes, but its range of flavour is narrow and flat.

So my dinner companion and I moved on, stopping next at Model Milk to check on the state of steak with Justin Leboe—a good chef who nonetheless is never content to use one technique when three will do. He served me a bavette cooked sous vide, smoked on his Big Green Egg, and finally seared. In place of the richly succulent and bloody interior of flash-seared flank, his was cooked medium, and tasted oddly like brisket.

Next stop was a Korean restaurant named Anju, where we tried a rib-eye decked in the sweet soy and garlic marinade the Koreans more typically apply to their thin-sliced short ribs, kalbi. It was tender and tasty—but far more so for the marinade than for the beef itself.

For our final snack we nibbled on a grilled flatiron with piquillo peppers at a tip-top tapas joint called Ox & Angela. The flatiron is one of my favourite cuts. Properly aged, it packs great flavour. This one was not quite there. Any more than, say, the slow-cooked prime rib at Charcut Roast House, which is the only dish that fails to please on the menu of my favourite Calgary restaurant.

And so, in bed later, I dozed off wondering how it could be that so many ambitious new Calgary restaurants were doing such imaginative new things with steak, but were content to do it with such second-rate steak.

It was not the raw product that was to blame—Alberta beef can be magnificent. The trouble was that every piece I sampled was wet-aged, waterlogged and mushy. Back in Toronto, I have my Alberta beef dry-aged seven to nine weeks. It tastes funky and intense and rich with the iron of its dried blood. Theirs tastes like not much. Which suggests that Alberta beef tastes better in Toronto than it does in Alberta.

So once back home I worked the phones to prove myself wrong. Eventually I found the gold mine: Balzac Meat Processing, where owner Rod McLeod dry-ages steers—the best, most space-extravagant method known to man. He hangs the carcasses for 28 to 40 days. Shockingly, 90 per cent is snapped up by private consumers. One of the restaurants that buys some of the remainder for its “butcher’s block special” is the Vintage Chophouse—which is where you will find me next time I visit Calgary.

More photos from Chris Bolin detailing how the Vintage Chophouse prepares their steak. 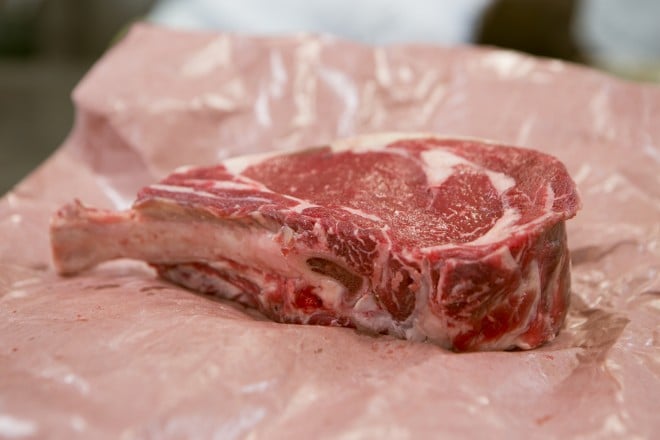 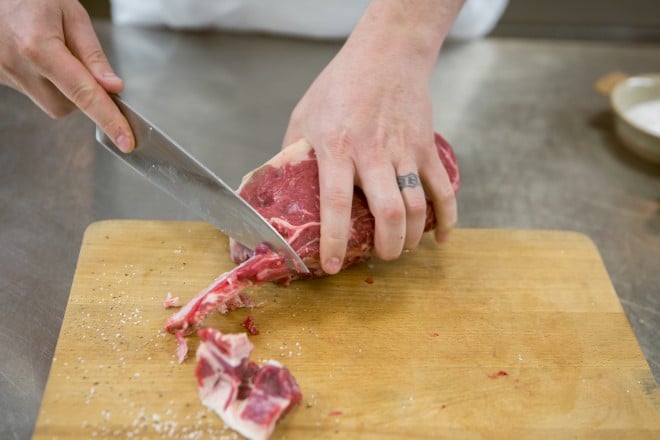 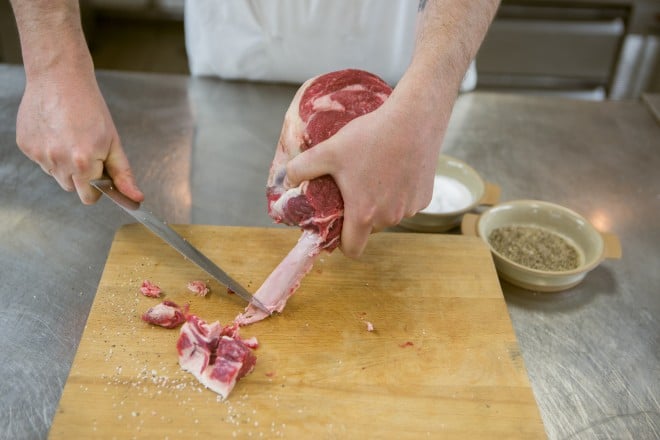 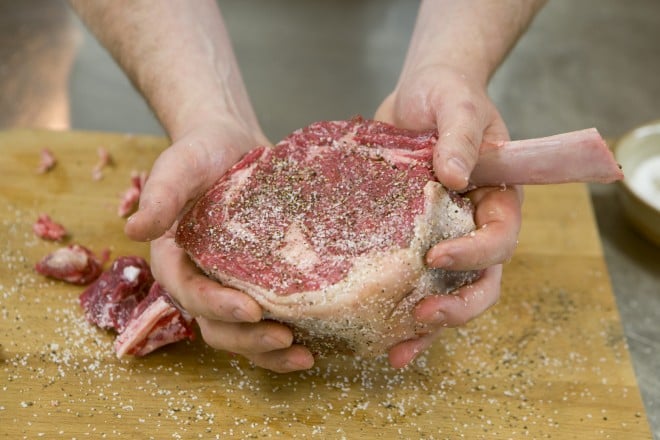 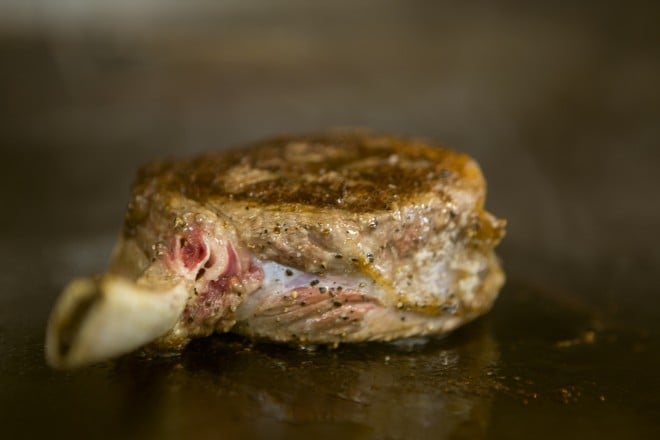 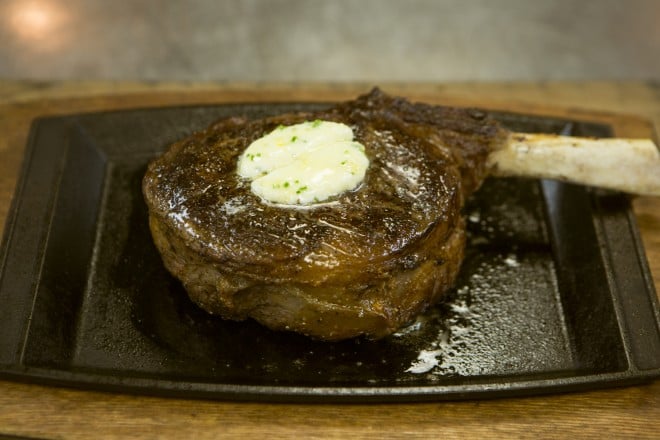 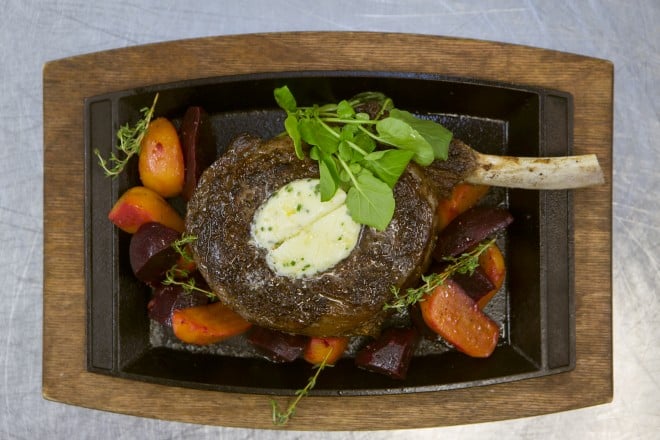 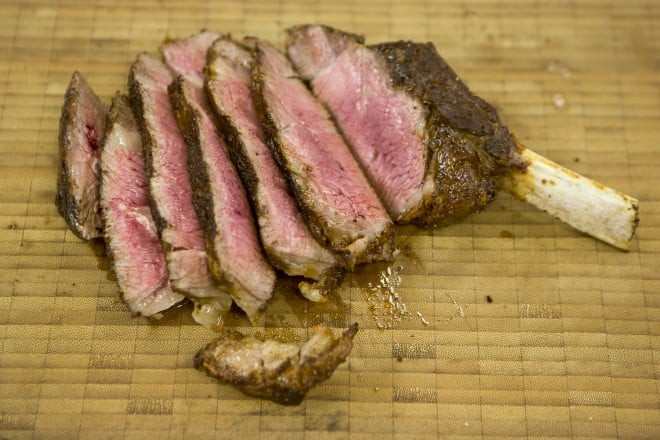