Why the Queen avoids beige

And other regal fashion tricks 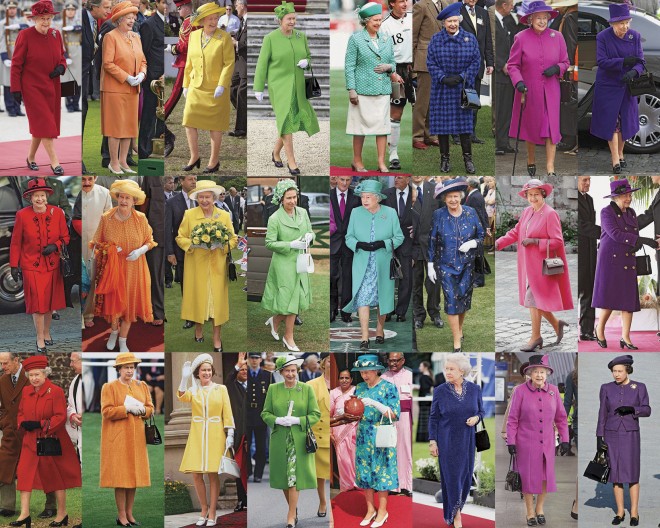 “I can never wear beige,” Queen Elizabeth II once lamented, “because no one will know who I am.” The comment, attributed by the biographer Robert Hardman, encapsulates a six-decade stealth fashion strategy that has produced an 86-year-old style icon whose look is unabashedly her own.

Uninterested in fashion per se, the young Queen always was conscious that “clothes are part of her armour,” as a royal couturier once put it. Loyal to the late designers Hardy Amies, for tailored daywear, and Norman Hartnell, for evening clothes that paid subtle homage to her host country, she established her pragmatic approach—and signature style—early on. And from the beginning, the five-foot-four monarch’s primary duty has been to her subjects, hence the Easter-egg pastel and gem-bright outfits than can be readily spotted in a crowd. In later years, the hues have grown even bolder, a result of the influence of Angela Kelly, the Queen’s former dresser turned personal assistant. Not a detail is left unobserved. Obligatory matching hats never shadow the sovereign’s face or fly off in the wind; clear plastic umbrellas employed in the rain boast coloured borders cleverly co-ordinated to match her outfit.

Devoid of frippery or fashion faux pas, the Queen’s clothing has become a soothing constant in Britain’s national life—from the practical low-heeled patent pumps and matching prim purse (whose contents still spark rabid speculation) to her sturdy brogues, tweed skirts and head scarves tailored to tramping across the moors.

Yet flashes of personality emerge—as seen in an enduring fondness for showy shoes like the Roger Vivier-designed ruby-studded kidskin pumps worn at her coronation or the sparkly brooches she rocked decades before Michelle O did. “Fashions fade, style is eternal,” Yves Saint Laurent famously said. He wasn’t talking about the sovereign who wisely avoids beige, but he could have been.