Why there are still far too few women in STEM

Women are enrolling in science and engineering in record numbers, but rarely win awards and often leave the field. What’s happening? 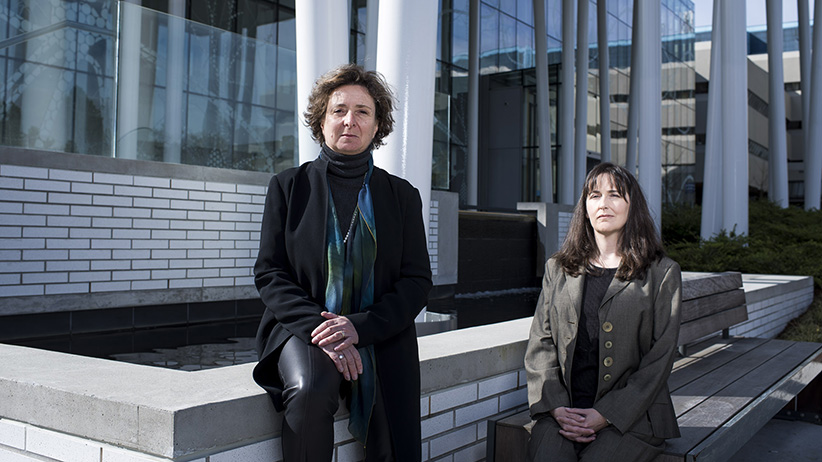 July Illes and Dr. Catherine Anderson resigned from the selection committee for the Canadian Science and Engineering Hall of Fame because all the finalists were men. (Photograph by Jimmy Jeong)

Women are being forced out of careers in science and engineering, not because they can’t juggle babies and Bunsen burners, but because they’re discouraged at every turn by thousands of small, sexist moments that make them feel unwelcome and unworthy. In other words, it’s “death by a thousand cuts,” which is how Reddit interim CEO Ellen Pao, who just lost a major sex-discrimination lawsuit against her former employer, described it in an interview with Katie Couric last week. “You’re just constantly trying to get this equal playing field, but being taken out of it step by step,” Pao explained.

Up until now, research on the dearth of women in STEM (science, technology, engineering and math) has mostly focused on the pipeline issue: namely, the more women you get into undergraduate classes, the more will come out the other end. That is underlined by recent press releases by both the University of British Columbia and the University of Toronto bragging that their first-year engineering classes have record-high female enrolment of 30 per cent in the case of U of T and 29 per cent at UBC. But step back and examine the landscape through a wider lens and you will see national enrolment is only 19 per cent on average, and that just 12 per cent of the country’s 280,000 professional engineers are women. Even if they do get a job, the number of women in leadership roles is just as low. For example, at universities, only 12 per cent of full professors in STEM are female, according to 2009 data from Statistics Canada; they are more likely to be working as contract faculty or as assistant professors.

When it comes to recognizing a body of work with an award or a prize, the numbers are just as discouraging. Only 11 of 60 members of the Canadian Science and Engineering Hall of Fame are women (18 per cent); 22 out of 186 prizes worth more than $200,000 were given to women by the Natural Sciences and Engineering Research Council (NSERC) between 2004-14 (12 per cent); and 23 out of 202 people named to the Royal Society of Canada’s Academy of Sciences in the past four years were female (11 per cent).

Many people still buy into the theory that most women forgo a career in STEM because they can’t, or won’t, juggle home and work. But unlike previous experimental studies done in labs, a recent U.S. survey of 557 female scientists in the workplace—60 of whom were interviewed in depth—confirms the existence of a career pipeline that steadily leaks qualified female candidates due to inherent and persistent biases.

“It’s harder to be a woman in science,” says Joan C. Williams, a distinguished professor of law at the University of California’s Hastings College of the Law and co-author of the January report called “Double jeopardy.” “That’s a pretty strong statement considering how hard it is to be a top woman in other fields.”

Of the women she and two colleagues surveyed, 34 per cent felt pressure to take on dead-end “feminine” roles like scheduling meetings and fetching coffee, and 53 per cent of women surveyed reported backlash for displaying “masculine” traits such as being assertive in meetings.

“Women walk a tightrope. Either they’re seen as the office mother or dutiful daughter who’s there to put men first, or they’re seen as a bitch with a personality problem with whom nobody wants to work,” says Williams, the director and founder of UC’s Center for WorkLife Law. The study also found 64 per cent of the women had to provide more evidence of their capabilities than male colleagues in order to receive the same recognition; 64 per cent had their commitment to work questioned and opportunities dry up after they had a baby; and 35 per cent reported being sexually harassed at work at least once.

The situation is even more dire for visible minorities. The Canadian Hall of Fame appears to have zero, and when asked if it could confirm whether any of its members were people of colour, spokesman Olivier Bouffard said: “Who is white? How far back does someone need to go to be considered not white?” Sixty per cent of Latinas in Williams’s survey reported a backlash for expressing anger compared with 50 per cent of white women, and 77 per cent of black women had to provide more evidence of their competence than male counterparts compared with 63 per cent of white women.

The women who do tough it out are consistently passed over for recognition, and a number of scientists are raising concerns about the lack of female winners of top awards and what it says about women in science in Canada. “Some try to justify this disparity by claiming there aren’t enough women to win major prizes. The truth is we have brilliant female scientists in Canada who are being passed over all the time,” says Alex Bond, an adjunct professor in the school of environment and sustainability at the University of Saskatchewan who did the research on the gender of NSERC award winners. He is particularly concerned about NSERC’s Hertzberg medal, which is given to Canada’s top scientist or engineer each year “for sustained excellence and overall influence of research work” and comes with a $1-million purse. “Since the award’s inception in 1991, there hasn’t been a woman who has won the Hertzberg medal, which is disgraceful,” says Bond.

Last week UBC neuroethicist Judy Illes and Dr. Catherine Anderson, a clinical instructor in the same school’s faculty of medicine, resigned from the selection committee for the Canadian Science and Engineering Hall of Fame because, for the second year in a row, all of the finalists were men. In the 24 years since the Hall of Fame was created, 11 out of its 60 inductees have been women. Individuals are nominated by others and, according to Anderson, women’s names are less likely to be put forward precisely because of these inherent biases. “Men are more likely to nominate men, so if we actually want to recognize the best of the best, we need to actively encourage women to apply,” she says.

Illes is one of 461 women out of 1,650 (28 per cent) who hold prestigious Canada Research Chairs, which come with $500,000 to $1.4 million dollars in research funding. In 2010, the federal government named 19 men to the highest tier, the Canada Excellence Research Chairs, which come with a $10-million prize. Following a public outcry over the lack of women, then-federal industry minister Tony Clement commissioned a report by the Canadian Council of Academics. It found female academics at all levels earned less than men, and that many promotion and tenure processes lacked exit and re-entry procedures that allow women who take time off to raise children to be considered.

Like so many reports and studies on the issue of gender inequality, it’s unclear what, if any, impact the report had. There are now 22 Canada Excellence Research Chairs: 21 men and one woman. While reports on how to tackle systemic biases pile up, female scientists continue to experience subtle, and sometimes not so subtle, discrimination. “I literally said I am not going to have children in one of my postdoc interviews. I wasn’t married and involved with anyone, but as soon as I said it, everyone relaxed,” says Anderson.

Illes, Anderson and engineer Jeanette Southwood, the third woman on the committee of seven, have asked the museum to reopen nominations so they can be advertised more widely in an effort to attract more females. Although Alex Benay, CEO of the Canada Science and Technology Museum, which houses the Hall of Fame, said Illes’s concerns were “previously stated and valid,” the Hall of Fame will not reopen nominations.

There are some signs of institutional changes. In October 2014 the Canada Research Chair program published new guidelines for reference letters that provided tips on how to ensure unconscious biases don’t undermine female candidates. Referees are encouraged to keep feedback specific to the position, and avoid adjectives that characterize women as maternal or agreeable. But that doesn’t change the fact that women are paid less to do the same work, asked to do clerical work even if they are qualified professionally, seen as disagreeable if they speak up at meetings, and talked over when they do speak up.

Aerin Jacob, a postdoctoral fellow in geography at the University of Victoria who has been a leading voice on the issue of gender bias in academia for years, is frustrated by the lack of progress in Canada: “We’ve known basically what to do about it for decades: diversify hiring practices, increase mentorship, identify and reduce explicit and implicit biases, address harassment, have daycares on campus for students and faculty.”

Maybe we should try tying compliance with money, like they do with the Athena SWAN Charter in the U.K., a voluntary system where universities are given ratings of bronze, silver, or gold based on their efforts to promote gender equality and racial diversity. In 2011, the U.K.’s chief medical officer announced that the National Institute for Health Research would reserve major funding for schools with a silver or gold rank. Universities got on board pretty quickly, and the program has been so successful in the sciences that this month they’re rolling it out to arts, humanities, business and law faculties.

Unfortunately, even when national governments support systemic change, bias is nearly impossible to eradicate. Maintaining an Athena SWAN award requires a significant amount of paperwork. In 80 per cent of cases, that burden fell on female scientists, and in 49 per cent of cases they described it as excessive.

“The expectation that women take on social and administrative tasks, away from their core work, is another structural barrier and any institutional initiatives need to be very careful not to actually make that worse,” says Marie-Claire Shanahan, the research chair in science education at the University of Calgary. “Bullying, aggression and everyday experiences that erode confidence are extremely powerful.”

FILED UNDER: stem women in science