A mix of music and moose calls 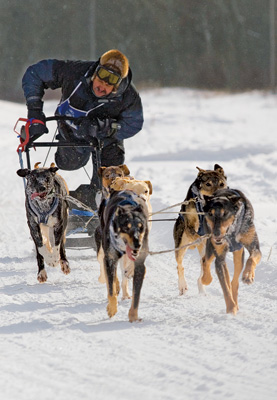 NORTHERN MANITOBA’S TRAPPERS’ FESTIVAL/THE PAS (Feb. 17 to 21)
Connect with your inner pioneer by taking part in trap setting, moose calling, muskrat skinning and even a beard growing contest. The quirky festivities, which began in 1916, now include a world championship dog race (where mushers compete for $40,000 in prizes), a crafts show and bannock baking (a bread made with salt, flour, lard, baking powder and water). But no trappers’ festival would be complete without an axe-throwing competition and, of course, the coronation of the King and Queen Trappers and a Fur Queen.

FESTIVAL DU VOYAGEUR/WINNIPEG (Feb. 12 to 21)
Dubbed “the world’s largest kitchen party,” this festival is about honouring the fur traders who established the Red River colony. Over the years, this event has grown to become Western Canada’s largest winter festival—more than 100,000 people attended last year—and includes 300 musical performances, snow sculptures, an arts-and-crafts market and the Governor’s Ball.

ARCTIC GLACIER WINTER PARK/WINNIPEG (December to March)
Every year, the Arctic Glacier Winter Park springs up from the ice and snow around the Forks. Visitors can explore an ice castle, toboggan down a chute, squeeze through an obstacle course made of ice and snow, and skate along the 1.2-km-long icy trail.

NEW MUSIC FESTIVAL/WINNIPEG (Feb. 6 to 12)
This seven-night event, hosted by the Winnipeg Symphony Orchestra, is sure to take those in attendance on a symphonic journey. The opening night piece, dedicated to the “angelic beauty” of Canada’s Arctic, was created by composer-in-residence Vincent Ho. The 30-minute work is based on a week-long trip that Ho took in 2008 to the Canadian North with a group of scientists, including time aboard the Canadian Coast Guard Ship Amundsen.

HUDSON BAY QUEST & NORTHERN LIGHTS/CHURCHILL
The Hudson Bay Quest, a traditional dogsled race, was founded in 2004 by a small group of mushers hoping to revive the sport. The exciting 400-km race (which begins next year on March 27) links Churchill, Man., and Arviat, Nunavut, and brings together expert teams from across North America as well as a loyal band of spectators, who brave the chilling -35 degree temperatures. Churchill is also one of the best places in Canada to view the northern lights. Astronomers and physicists have been drawn to the “polar bear capital of the world” for more than 240 years in the hope of getting a better understanding of this atmospheric phenomenon. Hop on the back deck of a heated “tundra buggy” to take in the lights of the aurora borealis as they fade and weave in the Arctic sky. For those looking for something with a more scientific bent, check out the Churchill Northern Studies Centre, where veteran “Starman” Roger Woloshyn teaches courses on the aurora borealis.