World's most expensive pizza: $450 and a full day in the making 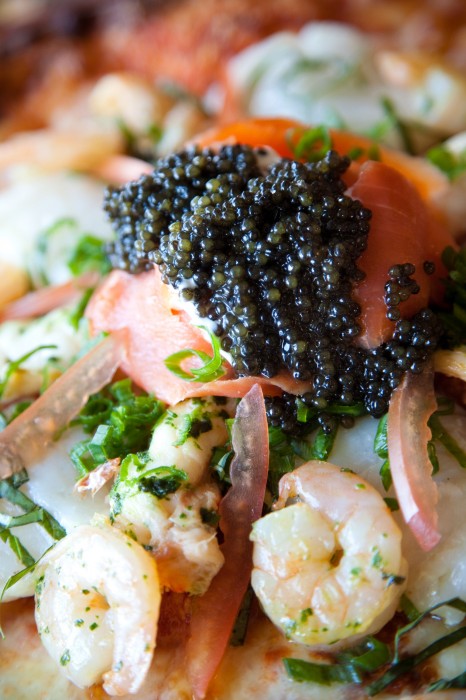 Canadians aren’t usually renowned for their food, or their world records, for that matter, which makes today’s news delicious on both fronts: the World Records Academy bestowed a new record for Most Expensive Pizza (without gold, that is) to Vancouver’s Steveston Pizza Company.

It’s also good news for owner and founder Nader Hatami, whose humble pizza parlour—three of them, actually, in Vancouver, South Surrey and a flagship in historic Richmond—usurped the most expensive pizza title from grumpy celebrity chef Gordon Ramsey, whose 2005 white truffle pizza sold in London for just 100 pounds sterling—a bargain!

“We’ve always had a section on the menu that was outside the box,” says Hatami, adding his fare—which includes affordable $14 pizzas too—is always evolving and updated every season. A couple of months ago, inspired by his good old days of working on cruise ships, Hatami added the “C6” to his menu. It’s $450 a pop and requires a full day’s notice to make.

What does a pizza that retails as much as a dishwasher deliver? Officially, it’s thermidor of lobster with black Alaska cod served with a side of Russian caviar. Like all of Hatami’s pizzas, however, it’s really about flavour interplay. “You have to create harmony between the ingredients of any pizza,” he says. “This has the richness of lobster with the saltiness of caviar, all brought together with smoked salmon.”

And while the C6 is hardly a light pizza—“it’s only 12 inches with 10 slices, but easily feeds five because it’s so rich,” he explains—fresh organic ingredients leave you feeling satisfied but not stuffed. “For me, to classify something as good, it has to taste good and feel great,” says Hatami. “You don’t want to eat something and immediately need a nap.”

So if eating an extra-large deep-dish pizza and passing out in front of a flat-screen is your idea of quality takeout, the C6 may not be for you. “It’s not the kind of pizza you’d have on a Friday night while watching the football game,” he says.

Fancy pizza, even before the hefty bill arrives, is a much harder sell. “One of my employees said I was crazy, but you know what? People spend $1,000 on fermented grape juice all the time. That’s my reasoning.”

But sprinkling shaved strips of gold atop a pizza seems like the most common method to up a pie’s street value. Take Margo’s Pizza in Malta, which holds the World Records Academy’s Most Expensive Pizza with gold title: a thin crust pizza with white truffles and a 24-carat gold leaf retails for over $2,000. A Canadian version at Toronto’s Magic Oven, presented with a gold leaf garnish, goes for $108.

Which begs the next logical question: Uh, who would buy a $500 pizza?

“A very rich person,” laughs Hatami. He’s being literal—when news of his pricey pie went viral last week, he’d sold just a single pizza. “I sold one more after all the media attention,” he said, meaning profits on the C6 have already doubled.