He was raised on the land, hunting and fishing. For his children and other youth, he was devoted to teaching his traditional skills. 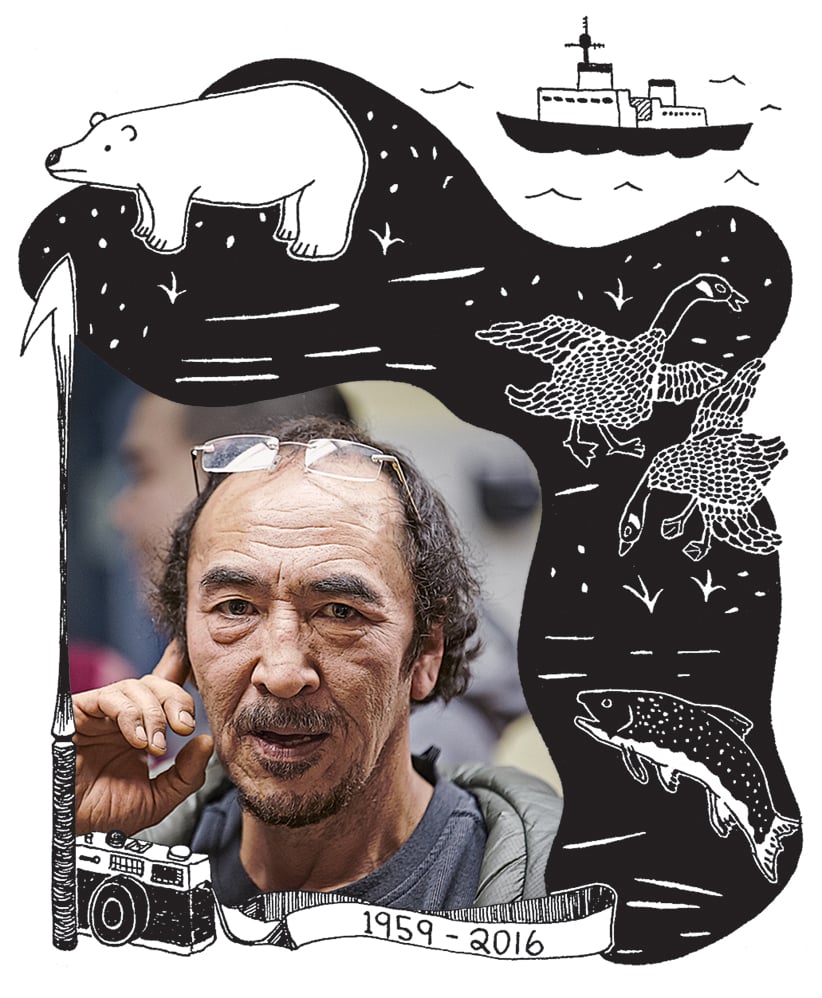 Yaaka Markusie Yaaka was born at home on Jan. 19, 1959, in Kangiqsujuaq, Nunavik, in northern Quebec, the ﬁrst child of Amaamak, a hunter, and Erquq, who was a seamstress and took care of the family’s nine children.

Growing up in a town of a few hundred people with no electricity or phone service, Yaaka loved to explore the land. “He liked to go to the river to catch small fish,” says his aunt, Elisapie.

Yaaka was five when the RCMP came to his community to slaughter all their sled dogs, claiming it was to prevent the spread of disease. He watched his puppy shot at point blank range and thrown in a pile of other sled dogs that were burned in a gasoline fire. The event, part of a tragic chapter in Inuit history, scarred the community. Many who relied on the dogs for hunting turned to alcohol. Yaaka’s father was no exception.

Three years later, a Coast Guard ship came through town mapping the coastline. Local kids were invited aboard the ship where an engineer told Yaaka—as much as he could understand with his limited English at the time—that if he could fix things with tools, he’d always have work. From that moment, Yaaka wanted to be a handyman who could fix anything. In the late 1960s, his father became the first person in town to own a camera. When it broke, Yaaka took it apart, put it back together and started taking pictures of the land.

At 11, Yaaka dropped out of school to become a hunter. Like his father, he was adept at hunting rabbits, foxes, caribou and, his favourite, geese. Geese hunting took a certain amount skill and luck. And patience. Whenever he packed up to hunt geese, if someone asked Yaaka what he was up to, he’d say he was going “waiting.” (One animal he wouldn’t shoot was a polar bear—unless it was with his camera.)

Yaaka became a father at age of 19 when his soon-to-be wife, Alasie, gave birth to Sapina. The couple added four more children over the years: Qipitaq, Lydia, Yakusi and Tukirqi.

In the mid 1980s, Yaaka’s best friend committed suicide. While Yaaka got his friend’s job as a school board maintenance person, the emotional hardship turned him to alcohol. In 1994, he entered into rehab. In 1997, by which point his marriage had fallen apart, tragedy struck when Tukirqi—not yet three—died in a snowmobile accident.

That same year Yaaka went on a first date with Marion James, a teacher originally from southwestern Ontario. “In the Arctic, you don’t really date because there’s no place to go,” she laughs. “But our first date was fishing.” Marion didn’t dress warmly enough, so Yaaka kept asking if she was cold. Marion was having such a great time she insisted she was fine. “He took my mitts off and checked my hands and said, ‘You have the beginnings of hypothermia.’ ”

Committed to setting an example for his kids, as well as at-risk youth in the community, Yaaka got his high school diploma at age 42 and volunteered to teach at-risk youth about traditional hunting and fishing techniques. He wanted the next generation to be proficient on the land, hoping it would lower the suicide and addiction rates in town.

He and Marion also started spending more time together. They had a girl, Madeline, in 2000. A boy, Jaimie, followed in 2003. As he did with all his kids, Yaaka built them sleds, toy boats and fake hunting rifles. When Madeline needed to make sealskin boots for a project, he took her seal hunting. The family also went camping often, where Yaaka helped Jaimie hunt his first caribou. At home, Yaaka played guitar and sang ’70s music. “He was stuck in the ’70s—even his jeans,” Jaimie says, joking about his dad’s old-fashioned GWG jeans.

In 2007, Yaaka left his maintenance job to become park warden for the Kativik Regional Government and would act as the tour guide whenever dignitaries or documentary crews came to visit. But life was far from perfect. His son Yakusi commited suicide in 2014. Broken-hearted, Yaaka spent longer hours at work and more time in his workshop making ulu knives, harpoons and ice jiggers.

In 2015, Yaaka and Marion wed. For their honeymoon in Costa Rica, Yaaka fulfilled a lifelong dream: to swim in the Atlantic Ocean.

On the evening of Sept. 2, Yaaka was goose hunting alone at a favourite spot when he suffered a heart attack. His family found him in the morning, slumped over his rifle with a dozen dead geese by his side. He was 57.