Yes, Virginia! There are deals out there

Although it may sound like a Christmas bedtime story, it’s all true. There has never been a better time to travel than right now.

A week in the sun for $297; a Caribbean cruise for $374; and reasonably priced space available for Christmas travel as of December 1st. Although it may sound like a Christmas bedtime story, it’s all true. There has never been a better time to travel than right now. Believe it!

Tour operators who assemble sun holidays can’t afford to let their packages perish on the vine. They deal in what is called ‘risk’ product – which means they have to pay for the airline seat or hotel room, whether it is used or not. So they prefer to have you use it, even if you’re not paying much for the privilege.

The resorts themselves are suffering from low occupancy, so they are giving tour operators a break on the rates. The result is unprecedented low-ball offerings from departure cities across Canada — even during the peak travel season of Christmas and New Year when prices usually soar, and people usually pay them. If you’re not picky about where you stay, it’s cheaper to fly south than stay home!

The funny thing is, when you get on your charter flight or cruise ship, you’ll have lots of company. Charter and scheduled airlines, as well as cruise ships, have perfected their timetables and capacity to ensure maximum loads — no matter what time of year or economic situation. In other words, don’t expect a middle seat to stretch out in. 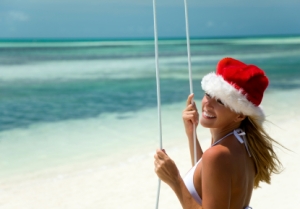 If hordes of tourists jammed into a charter aircraft in search of cheap beer and sunstroke isn’t your idea of the perfect holiday, don’t despair. While the really silly pricing is taking place in the mass-market all-inclusive markets, there are great deals to be had at higher-end resorts and alternative destinations too. Everybody’s hurting.

But the good times may not last. Across the pond in Europe, travel giants like TUI Travel and Thomas Cook have slashed capacity and product for the coming winter and next summer too. As a result, prices have gone up substantially. Since those companies own some of Canada’s biggest tour operators, the same thing may happen here in due time, bringing back some rationality to the marketplace – and higher prices for you.

Bottom line – you may never see prices like this again, so check out the deals, think about your travel dreams and head for parts unseen. The recession will still be here when you get back.