At 16, he met his future wife, then 13. A devoted couple, they raised a family, and they were never seen fighting, or even arguing. 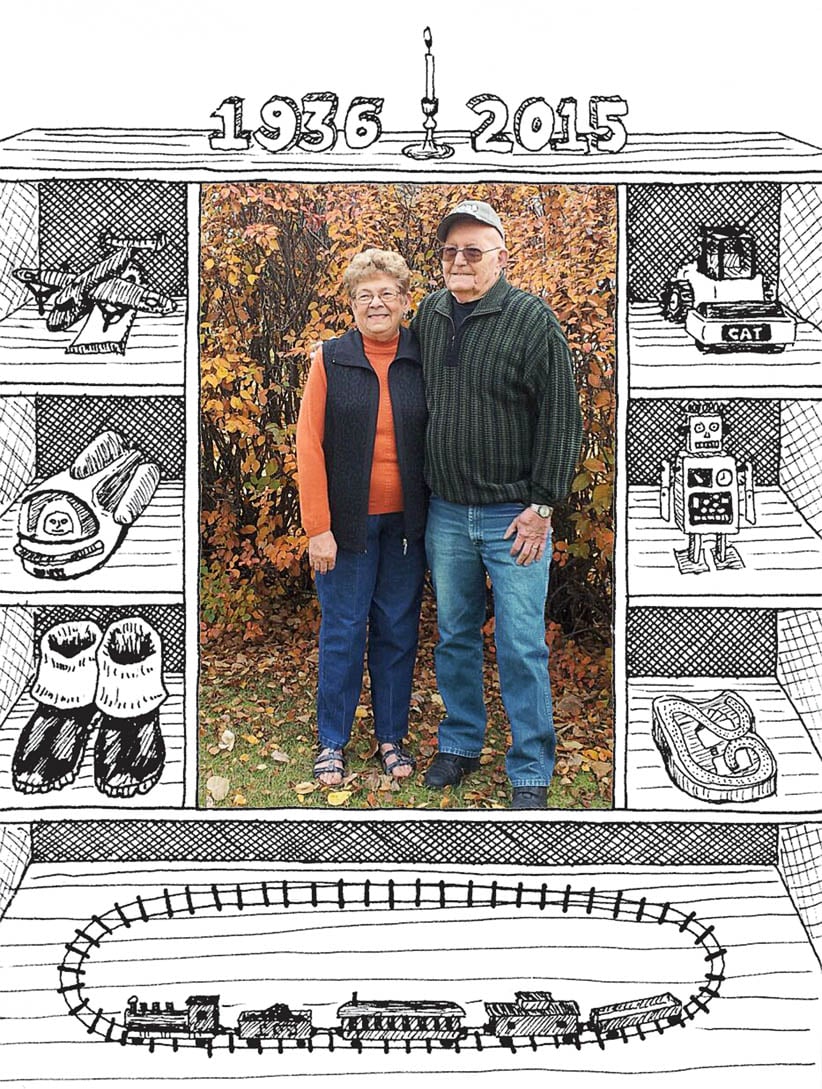 Lloyd Vernon Fletcher was born in Castor, Alta., on Oct. 8, 1936, to Earl, a farmer, and Mabel, who worked as a telephone operator and, later, a nurse’s aid. He was the second child, after his sister, Vera. Lloyd was named after his grandfather, but always went by Vernon, “Vern” for short.

The Fletchers moved from their farm into town when Vern was a young boy. In elementary school, the teacher forced the natural lefty to use his right hand so he wouldn’t smudge his ink. He grew into an athletic young man. Standing more than six feet tall, he could run like a deer and excelled at hockey and baseball. Thanks to his stern elementary teacher, Vern was ambidextrous. His signature baseball move was a left-handed bunt.

When Vern was 16, a local girl, Shirley Munro, 13, caught his eye. Her family had moved to Castor to take over the town dairy and the business of delivering milk by horse and buggy. She was a pretty girl, with dark hair and cat’s-eye glasses. They would walk to Louie’s Café, the town’s Chinese restaurant, for a Pepsi. On weekends, they drove to community dances, where they jived, two-stepped and waltzed the nights away.

Vern quit school in Grade 12 and started driving heavy equipment for the department of highways. Shirley finished high school, moved to Red Deer and earned a diploma at Henderson Secretarial School. She got a job in Calgary at the office of P. Burns & Co. meat packing, earning $2.76 per hour. The two kept dating, despite the 300 km between them. Shirley wrote Vern letters every week.

In 1959, Shirley returned to Castor. The pair wed in Knox United Church and rented the Castor community hall for a celebration. Their first home was a department of highways trailer. A son, Barry, was born one year later, followed by Dwayne in 1964. Daughter Wendy was born in 1965. Vern, always a joker, would introduce his only girl as “Wendy, my favourite daughter.”

In 1966, the Fletchers bought a house in Castor. Vern got a job with the county, running equipment and working his way up to foreman. He worked hard, leaving the house by 6 a.m. Shirley became the high school secretary. Vern and Shirley always put their kids’ needs first. Vern smoked unfiltered Export Plain cigarettes for years, but he quit cold turkey when the price of a pack went from $2.45 to $2.85. “I know they went without to keep us in skates and hockey sticks,” recalls Barry. The Fletcher house was a happy one, a place of “peace and harmony,” says Wendy. No one ever saw Vern and Shirley fight, or even disagree.

Through work, Vern often received toy versions of Caterpillar machinery from dealers. After retiring, his toy collecting took off to include train sets, airplanes and tin toys. He also collected guns. The Fletchers’ two-car garage became a display area for toys; the real cars were parked in the driveway. Shirley tolerated it, and even enjoyed meeting friends as they travelled to gun and toy shows. Around Christmas, Mother’s Day or anniversaries, Vern would often joke with Shirley, “I got you your anniversary present today.” It was always another toy or gun.

In retirement, neither Vern nor Shirley slowed down. Vern founded the Lion’s Club, was a town councillor for three terms, and spent summers with Shirley in two trailers parked on a lot they leased on Marie Lake, near Cold Lake. Vern was happiest playing crib, fishing or sitting around a campfire with friends, and enjoying a rum and Coke while wearing rubber boots with the top half rolled down. Soon, grandchildren were running around the lot at Marie Lake.

Though Vern hadn’t smoked for more than three decades, those years of unfiltered cigarettes caught up with him. He developed lung disease, which required him to use oxygen. Two years ago, he had a small stroke and was diagnosed with bowel cancer. Shirley remained with Vern, caring for him in their home. “She was so devoted. She never left his side,” says Wendy. In July, Shirley needed surgery to repair a weak heart valve. Vern, oxygen tank in tow, would make the nearly six-hour round trip to the Edmonton hospital with his son at least twice a week. Shirley didn’t recover. She died in hospital on Aug. 29, 2015. On the night of Aug. 31, Vern went to bed in the home he and Shirley had shared for 49 years. He didn’t wake up. His family says he died of a broken heart. He was 78.