This column is guaranteed 100% gay

Emma Teitel on why America's Supreme Court ruling on same-sex marriage is still important in Canada—and to her, personally 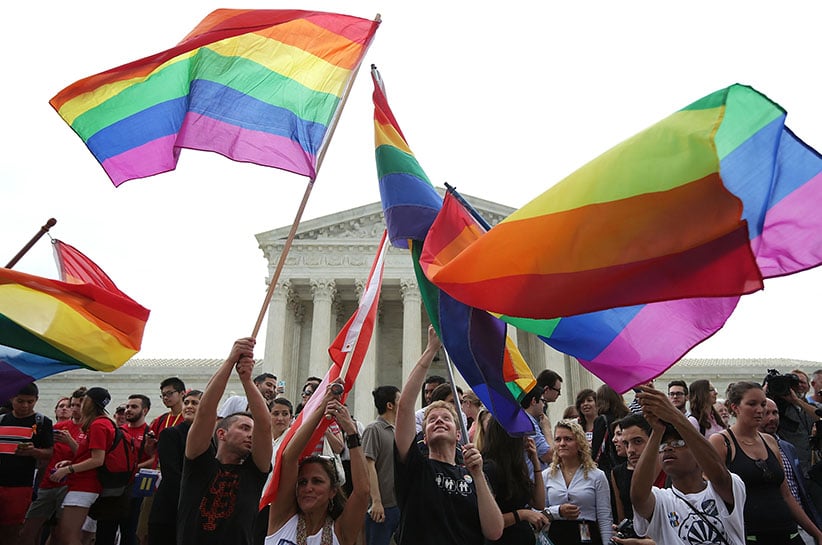 Since I began writing this column four years ago, I have received an abundance of hate mail, most of it from the same place: Burnaby, B.C., the third-largest city in that province—also, paradoxically, the hometown of two of the nation’s friendliest Michaels: Michael J. Fox and Michael Bublé. Burnaby is probably a very lovely place with equally lovely people, but the bulk of the mail I receive from the city tends to sound like this: “Dear Ms. Teitel, I’m not homophobic, but I don’t care that you are gay, so please stop reminding me. Your column is not a soapbox for you to rant about your lifestyle.”

The odd thing about these missives (sent from different emails and sometimes signed by named readers) is that I receive them not only in relation to columns I’ve written on gay issues, but in relation to columns I’ve written on just about anything. From Ontario’s updated sex-ed curriculum to smoking on restaurant patios to the Fifty Shades of Grey movie, readers in Burnaby would like to know why I insist on hitting them over the head with my sexuality—a sexuality so pronounced, apparently, that it manages to sneak its way into everything I write, subjects from Stephen Harper to Olympic hockey. (Me: “Go Canada Go!” Burnaby reader: “Enough with the homosexual agenda already!”)

Clearly, I’m damned if I do, and damned if I don’t, and even damned if I join the infamous international same-sex cabal and try to shoehorn my agenda into the space between the actual words on the page. Which is why I’ve decided to go full, non-innuendo gay this week and announce that, not only am I getting engaged to my girlfriend of five years, but we have decided to honeymoon, at least in part, in Burnaby. That’s right: Ibiza, Fiji, San Francisco, Burnaby. All the gay hot spots.

But seriously: For anyone unfamiliar with journalism lingo, the above is what’s known as “burying the lead.” Here’s the lead: I’m engaged. And not only am I engaged, but I became engaged the same year same-sex marriage rocketed into the stratosphere at the speed of light. Two big launches led the way: Ireland becoming the first country to endorse the legality of gay marriage through a citizens’ referendum in May; and the U.S. Supreme Court deciding just last month, in a historic 5-4 vote (also just in time for gay Pride), that bans on same-sex marriage are unconstitutional. In the words of American Supreme Court Justice Anthony Kennedy: “Marriage embodies a love that may endure even past death. It would misunderstand these [gay] men and women to say they disrespect the idea of marriage. Their plea is that they do respect it, respect it so deeply that they seek to find its fulfillment for themselves.” (I hear the tax breaks aren’t bad, either). The Irish event was unprecedented—it is nice to know conclusively that your countrymen support your right to wed—but the American decision is psychologically transformative.

America is, in the minds of many, the centre of the universe. It is where the asteroid lands in all those blockbuster movies; it’s where our favourite stars and soda brands are created. America is the epitome of mainstream.

That’s why, when I proposed to my girlfriend last week, I was nervous, but for entirely ordinary reasons. Would she say yes? If she said no, would we break up or continue dating as though nothing had happened? Or would I pretend the ring was a gag gift made of cubic zirconia that I would then return discreetly and never mention again? My nervousness had absolutely nothing to do with the fact that I was proposing to a member of the same sex. In fact, the landmark ruling in the States made gay marriage seem suddenly, painfully conventional. Sure, it’s been legal in Canada since the early 2000s—in Burnaby even—but nothing takes the edge off something taboo better than American acceptance.

Many have argued, in the days following the U.S. Supreme Court decision, that there is a danger in convention—that North America still has a long way to go, where LGBT rights are concerned, particularly trans rights. As Ted Johnson and Brent Lang pointed out in Variety recently, progress has its setbacks. “The biggest challenge [for LGBT Americans], beyond housing and employment, is perception,” they write. “Activists worry about complacency in the LGBT community.”

But we shouldn’t confuse complacency with much-needed celebration. My fiancée and I haven’t picked a date yet, but I’m thinking June next year. And Burnaby, you’re invited.