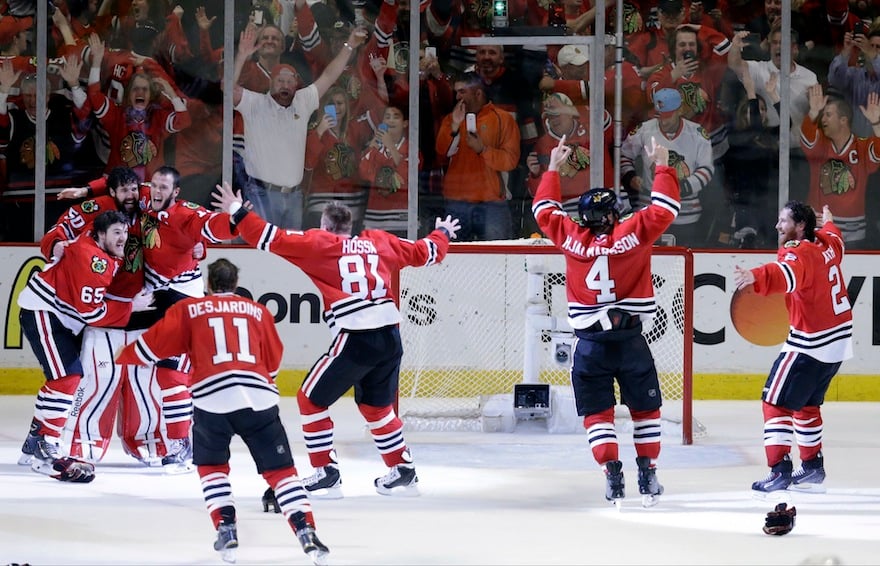 Members of the Chicago Blackhawks celebrate after defeating the Tampa Bay Lightning in Game 6 of the NHL hockey Stanley Cup Final series on Monday, June 15, 2015, in Chicago. The Blackhawks defeated the Lightning 2-0 to win the series 4-2. (AP Photo/Charles Rex Arbogast) 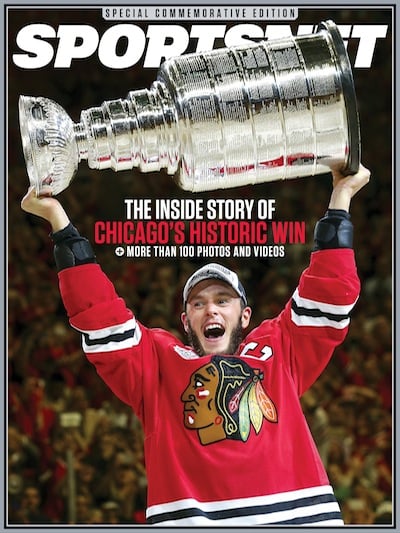 The following is an excerpt from Sportsnet Magazine’s Stanley Cup special digital edition—the inside story of Chicago’s historic victory, plus dozens of exclusive behind-the-scenes photos. The issue is free. Just download the Sportsnet magazine app on iTunes or on Google Play for Android users.

The rich sense of Blackhawks tradition is everywhere in Chicago’s home dressing room. “Hey!” a member of the team’s equipment staff yells, “Get off the logo!” The offending foot moves quickly. The otherwise grey carpet here is highlighted by that Blackhawks logo that looks like it’s glowing in the centre of the room. There’s a sign that says “EARN IT” above one door, and “Our Team One Goal Our Home” over another. United Center itself is a big, screaming example of the difference between these franchises. There are so many Stanley Cup and conference championship banners in Chicago that they add the years on to old banners as titles pile up, a piece of fabric sewed onto an existing banner. They’re running out of space. In Tampa, there’s plenty of room. The Blackhawks’ award-winners are listed as you walk into the dressing room. Legends like Tony Esposito and Glenn Hall are painted on the walls here. The maroon seats at United Center feel dated even though they were installed in the mid-’90s. The Blackhawks have been around so long they’re comfortable designating their sweater-wearing mascot, Tommy Hawk, “the best mascot in the NHL.” (In Tampa it’s the Thunderbug, a giant green bug who plays a drum.)

While Tampa uses lights and loud music to get fans going, it’s a different feel in Chicago. Even Michael Jordan (the statue) has a Toews sweater on. Songs like “Here Come The Blackhawks” and “It’s The Most Wonderful Time Of The Year” play. It feels old and historical. “I definitely felt it when I first came here,” says centreman Andrew Desjardins. He was traded from San Jose to Chicago in March. “It opened my eyes to that—the tradition.”

Never is it more telling than during “The Star-Spangled Banner.” In the new Madhouse on Madison, the minute Jim Cornelison belts out the first word of the anthem—“Oh”—22,336 people start yelling and screaming and clapping. There are crescendos of noise that build when Cornelison straightens out his arm on lyrics like “flag was still there.” Every player here marvels at this. Hedman calls it “one of the coolest things around the league.” And unlike at Amalie, there is no away section here filled with the other team’s sweaters. You’ll see two Lightning sweaters if you walk around the upper concourse.

Download the rest of the issue on iTunes or on Google Play for Android users.