Letters: 'Let us hope the judge can see past this charade' 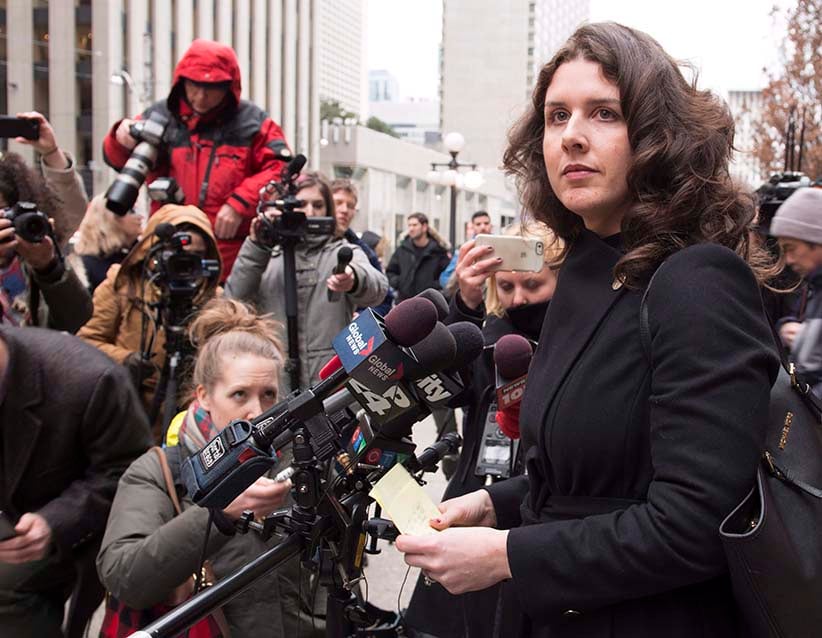 Gillian Hnatiw, the lawyer for “Trailer Park Boys” actress Lucy DeCoutere prepares to read a statement outside court in Toronto on Friday, Feb. 5, 2016. Hnatiw made the statement after DeCoutere spent the day defending herself under cross-examination by Jian Ghomeshi’s lawyer. (Graeme Roy/CP)

He said, she said

The credibility problem Jian Ghomeshi’s alleged victims now face exemplifies why it is so incredibly difficult for women (and police) to pursue cases of date rape and/or abuse within the context of a relationship (“Let’s be clear, this isn’t ‘great theatre,’ ” Anne Kingston, Feb. 22). On the face of it, the victims’ behaviour seems puzzling. However, it needs to be understood that, at the time, these women liked Jian, and they wanted him to like them. He was not a stranger that jumped out of the bushes and attacked them. So, similar to abused children, they did not fight, scream, run or immediately call 911. They were more likely to be shocked, confused and ashamed. This case should not be about the action or inaction of the victims. It should be focused on whether or not Jian Ghomeshi sought or obtained consent for “rough sexual behaviours” prior to his assaults of these women. Let us hope that the judge can see past this charade, or this case will serve as yet another dire warning to women to just shut up, try to forget about it and move on with their lives. Don’t expect justice.

Anne Kingston suggests that a reason for believing complainants is that consent is subjective. It does not matter what was in the mind of the accused; it only matters what was in the mind of the complainant. Kingston says that the revelations of continuing contact between one unidentified complainant and Ghomeshi did not refute “the witness’s allegations that sexual assault took place.” Though the prosecution must prove guilt—the accused does not have to prove innocence—the cross-examination did raise reasonable doubt about the witness’s evidence. It showed that the witness was not being honest as she had already told the court under oath that she had had no further contact with Ghomeshi, and it suggested that the witness would not have continued to contact him if she had been assaulted by him. What Kingston is close to advocating is not lowering the standard of proof in criminal cases but eliminating it altogether. Why bother with trials?

Rather than continuing to lower interest rates and expecting a different result (The Editorial, Feb. 22), would it behoove the powers that be to consider trying something different—and raising the rates? As one of the few countries in the world where a saver could make a reasonable return on money sitting in a bank account, would that not perhaps promote international investment into Canada? If we were suddenly deluged with money from overseas flowing into our banking institutions, would that not leave the banks with more money to lend out to stimulate economic growth?

Bank of Canada governor Stephen Poloz reassures us that “negative rates should be modest” and may work “once everyone gets used to the shock of paying to save.” With fees and service charges, banks have been charging customers for the privilege of saving for a long, long time. Banks continue to post record (obscene) profits quarter after quarter and investors hoard away mountains of cash. They are reluctant to chance bruising their margins by recycling money back into an economy where there is, dare I say it, risk. Economists forecast doom and gloom in the media because Canadians are over-indebted. Change the channel and we are encouraged to go further into debt to stimulate the economy. Change the channel again and we’re encouraged to save (even borrow to save) for our future and to pay for the privilege of doing so. Confusing? The old tin box buried in the backyard suddenly seems like a pretty shrewd financial planning tactic.

Your Feb. 22 editorial suggests that negative interest rates “while potentially useful” may lead to a “prudent wealth management strategy.” In terms of sustainably driving the economy, negative interest rates are about as useful as ice in a car’s gas tank. The historically low interest rates of recent years have already encouraged massive overinvestment worldwide. That’s why we see multi-million-dollar shacks in Vancouver and a hugely overbuilt Chinese steel industry now planning to lay off about 400,000 workers. More insanity: a worldwide stock market bubble. Virtually free money has triggered an avalanche of stock buybacks funded by corporate loans. A 2015 Reuters study found that repurchases by U.S. public companies were at record levels. The motive: reducing the number of outstanding shares can increase earnings per share (a key metric for assessing stock value) even if the company’s overall earnings decline. The spread of negative interest rates is another canary in the coal mine. There is a whole flock down there now, all chirping madly.

As an Ottawa native, I appreciated Paul Wells’s column on LeBreton Flats’ redevelopment (“Ottawa gets its groove on (seriously),” Feb. 22). While I agree with his thoughts, there is a Plan B no one seems to consider: if you realize Canada’s capital exceeds the Ottawa city limits and includes the obviously nearby western Quebec city of Gatineau, then the solution to the two competing bids is clear: accept both bids. Put the Senators and their new arena “downtown” by locating it walking distance from LeBreton Flats in central Hull. Extend the Ottawa light-rail system to it, then beyond. In LeBreton Flats, establish a London-like Kensington Gardens park connected to the green areas around the Sir John A. Macdonald Parkway to the west and the nearby national park (Gatineau National Park). Win-win. To cap off the project, create a National Capital province called Kanata, separate from Queen’s Park and Quebec City, both of whom have taken eastern Ontario and western Quebec for granted since 1867. That’s vision. C’est l’avenir.

I applaud the LeBreton initiatives, and look forward to seeing them bring life back to an elegant and dynamic city. But we have quite literally turned our backs on the Ottawa River and its enormous contribution to our heritage. One of the LeBreton Flats proposals includes a beer museum. Really? A few hundred metres from an unmarked portage carved in the river’s bank centuries ago? Every major North American city with a great river has some form of public recognition of its history. We have, basically, next to nothing. I’m thrilled that current plans call for a restoration of the Chaudière Falls site to its former grandeur. That is a serious beginning. Let’s hope we also find other ways to reconnect with our river and realize that LeBreton offers an excellent opportunity to redeem ourselves. Otherwise, the Ottawa will remain as invisible as the dozens of wrecks of those fine steamships lying at its bottom.

Tales of the trail

I take offence to “Trails of destruction” (National, Feb. 22), which taints the snowmobiling community. With limited outdoor winter activities, it is crucial that we, as a society, do not paint the type of picture of one recreational activity as this article does. Many rural businesses rely on snowmobilers to keep their doors open during winter months as little other tourism is taking place. In Manitoba alone, snowmobiling generates over $300 million per year. Yes, there have been freak accidents and unsafe practices by some riders, but we can say that of every recreational activity. In the United States, there are 600,000 injuries reported annually for skiers and snowboarders.

Clearly writer Chris Sorensen either hasn’t snowmobiled or travelled on the many well-kept, well-groomed and maintained trails that are available to us as Canadians, or he is somehow just anti-snowmobiling no matter what the truth is. As a group and as a whole, the vast majority of those that take part in the sport are responsible, respectful, law-abiding citizens. Many of the trails we ride on are “donated” seasonally, private land offered by the landowners to the sport as a whole. We are well aware that the network we ride on is a privilege and treat it as such. We wear helmets, we don’t drink and drive, we don’t rip up and down the main drags of our respective towns. We are not “thrill seekers” in the way you attempt to brand us. The thrill of being out in nature, taking in the beauty that is our country and going places many will never see is what you will find drives 99 per cent of us.

Are you ready for real country?

Regarding “The Nashville insurgency” (Music, Feb. 22), about the demise of country and western music, most true lovers of country music will recall a song by George Strait and Alan Jackson from a few years ago called Murder on Music Row. The words could not be more poignant. I was raised in the time of Hank Williams, Hank Snow and a herd of superstars. In the ’90s C&W music became nothing but a noise fest, and songs with filthy language. Your article about the sameness of every song is so accurate. Who wants to hear this cacophony of garbage? Some of the entertainers you see on TV now look like street thugs, or Hells Angel bikers. Bless folks like George Strait for keeping country music where it belongs! Bless Sirius Radio for shows like Willie’s Roadhouse, and keeping real country music alive.