Letters: 'A heart-warming story of generosity' 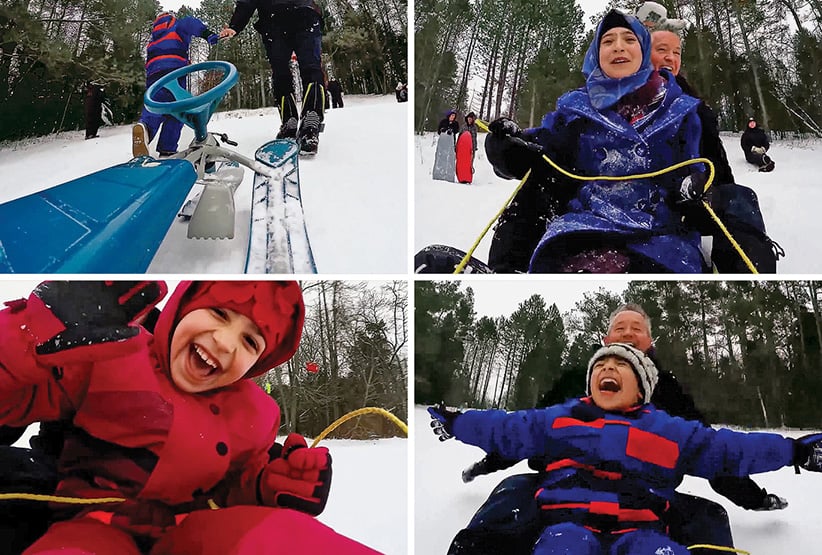 Michael Friscolanti has written a very moving story about Amal Alkhalaf and the wonderful group of people in Peterborough, Ont., who took it upon themselves to sponsor her and her children as refugees (“Saving family No. 417,” National, Jan. 25). As inspiring as the story of this family and the sponsors is, however, it does serve to highlight how poorly the refugees stuck in camps or cities such as Beirut are served by the UNHCR and our Canadian bureaucrats overseas. Ms. Alkhalaf was assigned a number (417) after being selected to come to Canada, but she almost missed her critical medical examination in spite of the fact she had a cellphone. It took the perseverance of the good people in Peterborough and your journalist to get her to realize this. One has to believe that the bureaucrats who are supposed to help the refugees treat them as a number and nothing more.

This is such a heart-warming story of generosity, goodness, hard work, camaraderie and loving care by people in Peterborough, Ont., in sponsoring Amal Alkhalaf and her three children as refugees to settle in their city. The 14-page article intricately describes events in Beirut and in Peterborough. The devastating fire of the only mosque in Peterborough is also mentioned, the imam is mentioned for his role in the sponsor group, and there is even reference to a local man with no link to the mosque launching an online campaign for crowd-funding to raise money after the fire. But it is baffling that there is no mention of the city’s Jewish synagogue offering their Muslim neighbours a place to pray. The image of Muslims filling the synagogue in prayer is heartening. This gesture has established what promises to be a long friendship between disparate neighbours. It is exemplary. It is Canadian.

On Jan. 12, I was passing through Toronto and staying overnight at an airport hotel. While there, a lot of people were coming up to me and saying, “Thank you, thank you, thank you so much!” They were newly arrived refugees. They were so happy and grateful to be in Canada. It made me proud to be a Canadian that we are helping these people. I too say, “Thank you Canada,” and to the refugees: “You are very welcome.”

I totally agree with Scott Gilmore (“Germany’s real problem with refugees,” International, Jan. 25) that prosperous Western nations have the duty to help refugees but they also have the right to expect the same refugees to respect their laws. It is not racism to tell refugees that it is their responsibility to adapt to their new country, and we should not have to bend backward to accommodate them at the risk of weakening our own social and cultural standards.

There isn’t a crisis in parenting (“The collapse of parenting,” Society, Jan. 18). There are crises, plural. We have a generation of parents who do not treat their child in an authoritative way. Parents want to raise perfect children who appreciate the myriad ways of the world, are well-balanced and worldly. But the political angle they ram down their kids’ throats is overwhelming. Everything is scripted, from the food to their kids’ relationships to their learning needs. Any punishment harsher than a “time-out” has been categorized as “abusive,” whereas the abuse being handed out is by raising a constitutionally weak child with an overdeveloped ego. It is important that kids fail in order for you to understand, as a parent, of what they are and are not capable of.

We have to get over this trope that kids are equal to adults. I’m a teacher faced with students who informed me I could not criticize them or tell them they had the wrong answer, and that what I was telling them was “just my opinion.” I always gave my own kids choices when appropriate, encouraged them to question issues in life, taught them how to construct a logical argument, gave them lots of experiences both at home and travelling abroad, but only five TV channels and no shiny distraction devices. I never demanded obedience, but I had very high expectations of behaviour.

Parenting is not as difficult as our pop culture makes it out to be. Kids need food, clothing, shelter, structure and nurturing. I spanked three kids several times each, “punished” them with no privileges or lunch for bad behaviour—and also loved them. My kids’ teachers regularly praise me for having the best kid in their school. “How do you do it?” My reply: “I parent her.” I am sick of parents’ excuses. I was raised by two addicts who made a lot of mistakes; I worked hard to not repeat them. My generation are the worst parents, too absorbed in their iPhones. Grow up, people, and raise some decent people with life skills.

You quote a psychotherapist saying, “Nobody knows what they’re doing when they leave the hospital with an infant. Every parent learns by trial and error.” Those parents must have been raised in test tubes or rotating foster homes. Apparently none had a decent mother and father who had any kind of principles or guidelines or rules on raising children. Apparently their own parents knew nothing and have no advice or guidance based on practical experience that is worth hearing. Books by strangers and ignorant peers are now the source of wisdom. Yes, the world has changed. But basic principles and good conduct can prevail in any environment. Just ask Mom and/or Dad how they raised the perfect you!

“All the buzz” (Society, Jan. 18) leaves the impression that energy drinks are in a regulatory or food-safety Wild West. This is not the case. Energy drinks are strictly regulated both in terms of their size, labelling, and their caffeine content. A cup of takeout coffee has approximately twice the caffeine (179 mg in 237 ml) as a similar-sized energy drink (80 mg in 250 ml). Energy drinks in Canada, very simply, have less caffeine than other more common and less regulated beverages. It is also false that “energy drinks may be more potent than their labels suggest.” The levels of vitamins and nutrients in energy drinks in Canada are within the parameters set by the federal regulator responsible for safety of the Canadian food supply. Additionally, beverage labels clearly note the calories, sugar, total caffeine from all sources (including guarana), and other nutrient information including vitamins and minerals. To imply that our industry, or Health Canada for that matter, would allow the promotion of dishonest labelling is patently untrue. It is also important to note that taurine is an amino acid, not a stimulant. The safety of energy drinks has been established by the world’s leading health authorities, who have analyzed the safety of energy drinks for a number of years and have concluded that no restrictions on the products are merited.

As we witness the economic impact in Alberta and Canada from plummeting oil prices (“Gutted by the glut,” Economy, Jan. 18), I await the cheers and celebration by those who have campaigned against our dreaded “tar sands” for years. They may be finally getting their wish of destroying Canada’s golden economic goose. And just to make sure it is really dead, let’s welcome new carbon taxes and corporate taxes and royalty reviews from Rachel Notley’s government. The world can breathe better now because “Canada is back” and federal and provincial governments can go on the biggest spending spree with money they don’t have against the backdrop of statements from Bank of Canada governor Stephen Poloz about how things will get better. Except he, along with our political leaders should explain how this will be achieved without a healthy oil industry. I would like the premiers of our eastern provinces to explain where their “welfare cheques,” a.k.a. transfer payments, will come from if not from Alberta. Because without an economically strong Alberta, they will have to get used to a “lump of coal” as their future transfer.

Radon not on the radar

It’s great news that more is being learned about how to treat lung cancer in people who have never smoked (“Second chances,” Society, Jan. 25). However, your article didn’t mention that radon is the second leading cause of lung cancer after smoking, and the biggest factor in non-smokers. The Canadian Cancer Society estimates that 3,000 Canadians will die of lung cancer each year due to radon exposure. Radon is a naturally occurring form of radiation found in rocks and soil in regions across Canada, and exposure through the air in enclosed areas increases the risk of lung cancer. The good news is that radon can be measured and remediated, yet 96 per cent of Canadians haven’t tested their homes for radon. This is knowledge we have already, and we need to act on it. Test your home for radon, get rid of it, and lower the lung cancer risk for you and your loved ones.

In the article about unexploded ordnance on First Nations land in British Columbia (“Bombs away, but at what cost?” National, Jan. 11) the writer mentions a 60-cm mortar bomb. This would be one heck of a big shell, 10 times the diameter of a standard 60-mm one.