Letters: 'Ashamed to say I am Canadian' 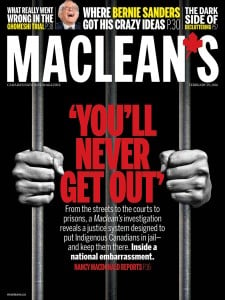 Nancy Macdonald’s report on Indigenous people in our justice system (“Justice is not blind,” National, Feb. 29) has kept me awake at night and made me ashamed to say I am Canadian. Ever since foreigners first came to this country, Indigenous people have been treated appallingly. There will never be enough done to right the damage we have inflicted, but perhaps we could start by getting rid of racist attitudes and providing mental-health services, education and a justice system that serves the people using it. We should use the example of Pope Francis and apologize to the Indigenous people of Canada for violating their values, traditions and land.

Kudos for an outstanding piece of investigative journalism. The examples of Canada’s shameful treatment of its First Nations made my head spin. In particular, that our incarceration rate of Indigenous peoples is “higher even than South Africa at the height of apartheid.” Our justice system should be a model. Instead, it makes me angry and sick to think that my country’s leaders turn a blind eye to this outrageous subjugation of First Nations. Time for change. Now.

Our new Liberal government is working to provide safety, shelter and hope to 25,000 refugees. If that can be done, why not a similar determined effort to provide the same help for our own Indigenous citizens? We can do it, even if it means lighting one candle at a time. It’s better than continuing to remain in the dark and pretending we don’t have a problem.

As a parent of five I read Sue Klebold’s thoughts (The Interview, Feb. 29) with great interest. In this age of violent video games and television, it can be difficult to separate fantasy and reality. I can’t imagine the emotional roller coaster she endured. As a parent, let her revelations encourage us to practise due diligence so our own children don’t fall victim to the destructive forces of mental illness.

I found it interesting that the message (“The dark side of Kondo living,” Help, Feb. 29) Flannery Dean took away from Marie Kondo’s books was that “OCD is a model for ‘life-changing’ happiness.” I believe her true message is one that North Americans could benefit from greatly: Appreciate the possessions that bring you joy, focus on them and discard the rest. By being less materialistic, our lives become more meaningful and, yes, organized.

The current critique of Sir John A. Macdonald and Sir Wilfrid Laurier (The Editorial, Feb. 29) is unfair and narrow-minded. Macdonald et al. lived in different times; comparing them should be done within the social context of their times—not ours. People living in glass houses should not throw stones, especially against their forefathers, who did their best in difficult circumstances. It is good to be young and idealistic—but not blind.

I am absolutely appalled at the comments of the group Students Against the Statue Project. I thought one of the objects of a university education is to enable students to think critically. The reaction of these students is a disgrace and displays a level of revisionist ignorance that is beyond belief. Obviously they would like to change history to satisfy their own narrow outlook. These students should stop trying to rewrite the past. Grow up.

In his column (“I’m with stupid,” Feb. 29), Scott Feschuk lampoons the absolute tooth-fairy drivel spouted by the Republican presidential candidates. It’s hilarious, but scary because so many educated U.S. citizens seem ready to swallow this idiocy and vote a monster into the White House.

Filling in the gaps

Your piece (“If ceilings could talk, National, Feb. 22) states, “Little is known about the expert artisans” who worked on the Centre Block of Parliament Hill. I’d like to fill in this gap a bit. My great-grandfather, Merrick Davis, a master plasterer, was one such craftsman. From an early age, we would tour the Parliament, with lots of reminders from my mother: “Your great-grandfather worked on all this!”