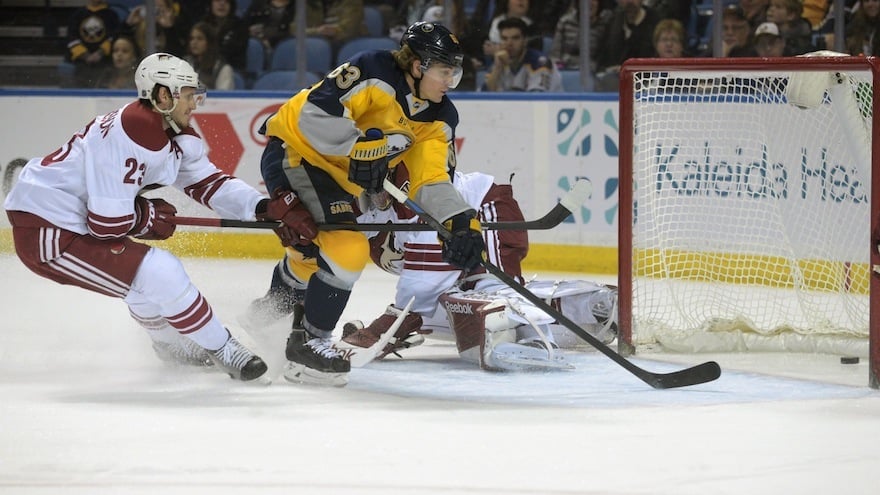 These late-season nail-biters are fine, with their galloping tempo and ferocious checking. But let’s face it: the real drama in the NHL tonight is unfolding far from the hurly-burly of Chicago, where the L.A. Kings are grasping for a wildcard playoff spot, or in Montreal, where Tampa Bay battles the Habs for top spot in the East.

No, the big story’s going down in Glendale, Ariz., where the most shameless race for the bottom in league history has hit its denouement. It’s the second leg of a two-game showdown between the Buffalo Sabres and the Arizona Coyotes—the only two times, as luck would have it, the teams play each other all year. We all know the stakes: whosoever finishes with the most embarrassing record in the NHL this season shall get the best odds of drafting super-prospect, Connor McDavid.

You wonder if McDavid hates seeing teams debase themselves thus for him, but this quirk of the schedule has the complexion of an intriguing psychological experiment. What happens when two teams who have intentionally gutted themselves have to play each other twice in five days, knowing neither their fans nor their bosses really want them to win? Can you call it NHL hockey?

Sounds harsh, yes. But consider for a moment that the Sabres have shed more than a quarter of their pre-deadline lineup, including not one but both of their big-league goalies. The Coyotes, not to be outdone, dealt one of their best offensive defencemen (Keith Yandle), best defensive defencemen (Zbynek Michalek) and best centres, Antoine Vermette. Even the NHL’s broadcast arm couldn’t duck the truth, billing the two teams in last Thursday’s highlights as “the top contenders for the first overall 2015 pick.”

Related from Sportsnet: How to keep NHL teams from taking for the draft

So far, advantage Sabres (20-47-8), who continue to mock gravity, with one win in their last 13 games, while Arizona (23-45-8) seems to have reached terminal velocity. Last Thursday, they won—which is to say, lost—a surprisingly hard-fought match with Buffalo, falling 4-3 in overtime. And let’s be clear: the players forced to perform this charade are trying. They’re just not succeeding. Last week’s titanic battle featured Buffalo taking not one but two too-many-men penalties, scoring a late-game equalizer thanks only to a howling giveaway by Coyotes veteran Shane Doan.

Thank heaven for it, because up to that point, the highlight of the game had been the New York State Smokers’ QuitLine Trivia Question.

Tonight promises to be every bit as bad, which is why we’ll be live-blogging every blown pass, silly penalty and empty-net shank. Among the experts joining me:

Adrian Lee, a Maclean’s digital editor who, when he was young, decided being a Leafs fan was a fool’s errand and decided to throw his undying support behind, of all teams, the Edmonton Oilers. This makes him the resident sports-despair expert.

Nick Taylor-Vaisey, a Maclean’s internet geek who, when he was a young Leafs fan in a Toronto suburb, never forgave his father’s allegiance to the Montreal Canadiens. He’s almost never cheered for a winning team, unless the Argos occasionally count.

We’ll also have other special guests appear, including our Alberta columnist Colby Cosh, and we hope you’ll join in too. The fun gets started at 10 pm EST. Join us below: