Dutiful as always, but a bit rebellious on this record-setting day

Today, Queen Elizabeth II made history, becoming the longest-reigning monarch in Britain. At around 5:30 p.m. local time (12:30 p.m. EDT), she broke Queen Victoria’s record of 23,226 days, 16 hours and 23 minutes. According to palace officials, she’d wanted to avoid any fuss—her reign started with the early death of her beloved father, George VI, at age 56—and mark the day quietly away from view at Balmoral Castle in Scotland.

Alas, her old-fashioned concept of privacy collided with today’s insatiable 24/7 demand to visually mark such a historic moment. Ever the dutiful monarch, she gave in.

This morning Elizabeth and Philip went to Edinburgh to get on board a train drawn by a steam locomotive (named the Union of  South Africa) for the opening of the longest railway, the Scottish Borders, built in Britain in more than a century.

Oh, and a speech. And a picture, released to mark the day that showed the Queen hard at work on the state papers that arrive every day in those big red Moroccan leather cases. All very photogenic, chosen, no doubt, to be on every newscast and website around the world. The royal household doesn’t play the social media game at a Kim Kardashian level, but its savvy shouldn’t be underestimated.

Neither should the Queen. She did everything required of her, but on her own terms. In perhaps a subtle form of rebellion for having to mark this day publicly, she didn’t break out a new outfit but instead wore a coat and hat worn many times before. She looked appropriately regal, but without the flash of a jubilee outfit. For her diamond one in 2012, she wore a brooch featuring 158 carats of diamonds, this time it was a bow brooch. Sure, was once owned by Victoria, but it’s one of a handful of such designs in her jewel box.

The speech was bog standard, except until the end, when she acknowledged everyone who’d “kindly noted another significance attaching to today, although it is not one to which I have ever aspired. Inevitably, a long life can pass by many milestones; my own is no exception.” With that necessary bit done, she wrapped it up in three quick sentences. “But I thank you all, and the many others at home and overseas, for your touching messages of great kindness. So now to the business in hand. It is my very happy duty to declare the Borders Railway open.”

In addition to that officially sanctioned event, the media flooded the Internet and newsstands with all things Queen-related. (Read our complete coverage here) Her governments honoured her. “She never, ever falters,” says British Prime Minister David Cameron. And for an event that seemed to sneak up on people, it was marked throughout the Commonwealth, including Canada, where the Monarchist League signed up communities the length and breadth of the country to celebrate the historic day, even providing a handy outline of a standard event, complete with wording. (She’s not technically the longest monarch of Canada, as Louis XIV ruled for 72 years, but many are ignoring the pre-1867 sovereigns.)

Related: Comparing the reigns of Victoria and Elizabeth II

Bells were rung, just as they were when Queen Victoria became the longest-reigning British monarch, surpassing George III in 1896. She recorded her own record day in her diary: “Today is the day on which I have reigned longer, by a day, than any English sovereign, and the people wished to make all sorts of demonstrations, which I asked them not to do until I had completed 60 years next June. But notwithstanding that this was made public in the papers, people of all kinds and ranks, from every part of the kingdom, sent congratulatory telegrams, and they kept coming in all day.”

Tomorrow we will be ringing the Abbey bells as HM The Queen becomes the longest reigning monarch in British history http://t.co/SRSSyKKrws — Westminster Abbey (@wabbey) September 8, 2015

A more practical, and long-lasting, memorial is a bench in Waterdown, Ont., being unveiled on Wednesday by Lieutenant-Governor Elizabeth Dowdeswell.  Engraved on it are all of the Queen’s 23 tours, as well as highlights, such as the opening of the 1976 Olympics in Montreal, signing the Constitution in 1982 and unveiling the cornerstone of the Canadian Museum of Human Rights during her last tour, in 2010.

See the declaration of loyalty to Her Majesty, signed by all her viceregal representatives in Canada. #HistoricReign pic.twitter.com/aS4MFFYLJA — David Johnston (@GGDavidJohnston) September 9, 2015

Accolades also poured in from politicians, including Prime Minister Stephen Harper, who stated: “Her Majesty has served Canada with honour, distinction and great affection. Through her unfaltering dedication to all facets of our society – from our Aboriginal Peoples to the Canadian Armed Forces, from volunteers to charitable organizations – she has enriched our national life and has never wavered in her commitment to duty or to her Coronation Oath as Queen of Canada.”

Not to be outdone, the Royal Canadian Mint—which has used for effigies of Her Majesty since 1952—is selling coins in both silver and gold. 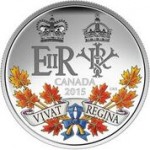 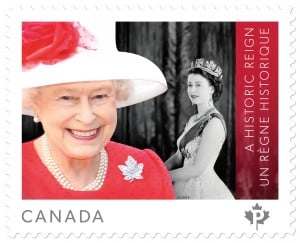 The only one that isn’t a limited edition is the $20 silver coin designed by Canadian artist Cathy Bursey Sabourin. It features the cyphers of both Elizabeth and Victoria above a coloured wreath of maple leaves. And for those not up on their regal Latin phrases, “Vivat Regina” means “Long live the Queen.” At the same event today at Rideau Hall, Governor General David Johnson unveiled a stamp for Canada Post, in which the Queen wears her diamond Maple Leaf brooch. It was a gift from her father, George VI to her mother on the eve of their historic tour of 1939, the first time a reigning monarch had visited his northern realm.

Most unusually, he revealed a commemorative $20 banknote from the Bank of Canada. This, in terms of royal commemoratives, is a Really Big Deal. There are just two predecessors, one for her grandfather, George V, who had his Silver Jubilee in 1935, and the other for the nation’s centennial in 1967. 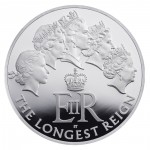 It isn’t a jubilee (the next is a platinum one in 2022), but that hasn’t stopped businesses from cashing in. There’s the usual cups and saucers, including a crazily ornate range from the Royal Collection. One of the nicest graphic designs is in a coin from Britain’s Royal Mint, featuring all five portraits of Elizabeth II that have appeared on circulating coinage (prices from a basic coin costing $26 to the platinum version for $10,000). 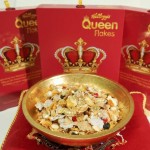 Heck, even Kellogg’s got into the royal commemorative business. Since the Queen reportedly liked their cereal, it issued a limited edition Queen Flakes, filled with macadamia nuts as well as edible pearls and gold crowns.

The Queen is likely never to again visit Canada. She’s 89, Philip is 94, and their trips are shorter, and closer to home. Even the Prime Minister acknowledge that in his statement, “As Canadians prepare to celebrate the 150th anniversary of Canadian Confederation in 2017, it would serve us well to mirror the Queen’s dedication to and affection for this great country and the rich diversity of her people. We look forward to welcoming Members of the Royal Family to join us in celebrating a country that remains the envy of the entire world.”

Regardless, around 85 per cent of Canadians have known no other monarch than the current Queen of Canada. And given her health, it’s a fair bet that she’ll be around for a good many more historic events (she turns 90 next year). So while most of Canada will never witness such a day again, perhaps today’s youngsters will witness it. Perhaps for the future King George VII?