Why Jian Ghomeshi's lawyer, Marie Henein, has turned her attention to Peter Mansbridge and the court of public opinion 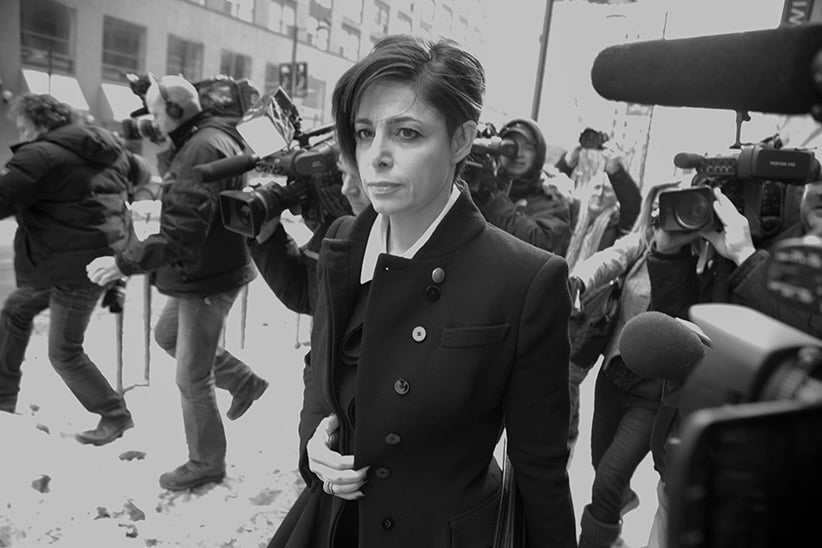 Central to defence lawyer Marie Henein’s well-crafted imagery is the notion that she reserves her voice for the criminal justice system, that she’s media-averse.  It’s mythology that holds, even though she submitted to an interview and posed for a glossy Vanity Fair-style portrait for a profile piece last year in Toronto Life.  So when the accomplished lawyer showed up in a 19-minute interview with Peter Mansbridge on the CBC’s The National last night, anyone following the trial couldn’t help but take notice, especially after she protested that she approached it “reluctantly.” If we know anything about Marie Henein, it’s that she’s a woman who doesn’t do anything she doesn’t want to do. So what’s up with this mainstream media cameo appearance on the very broadcaster that created and then disgraced her client?

Henein’s appearance, five days after a controversial ruling that acquitted Ghomeshi of four sexual assault charges and one of choking to overcome resistance, was framed as a command performance. She spoke of a “number of people that I really value, justice actors” who felt it was important for someone with 25 years of experience in the court to “address some of the misconceptions” that arose in the Ghomeshi case. What she’s talking about here, of course, is the other court the Ghomeshi trial simultaneously played out in, that of public opinion—social media and news coverage. In these forums, her performance was critiqued, as was discrediting witnesses and the trying of sexual crimes more broadly. The fact that Henein even felt obliged to address the issue is telling, reflecting an ongoing recalibration of the power balance between the courts and the public, one in which the courts prevailed without question.

More from Anne Kington: The Ghomeshi verdict is in. But the story isn’t over.

The ferociously smart Henein, who defines herself as feminist and who has worked pro bono for the full decriminalization of prostitution and the human and legal rights of sex workers, ably rejected the notion defending men charged with sexual assault is a betrayal of other women: “I respect their right to say that, I don’t respect their opinion or agree with it,” Henein said, rightly calling it out as sexist: “When males disagree with one another or are on opposite side of things, you’re not viewed as someone who betrayed your gender, you’re viewed as people who disagree.” Mansbridge wouldn’t let the subject go—later reading several Facebook posts calling Henein a traitor to the sisterhood: “I’m not about to send myself back into the kitchen because somebody doesn’t like what I do,” Henein said, summoning Hillary Clinton’s notorious “I could have stayed home and baked cookies and had teas” comment while managing to also discredit kitchen workers.  She gave short shrift to the #IBelieveWomen movement, noting no group should be reflexively believed without question, including police or priests:  “It’s never been to the benefit of the disadvantaged or the most marginalized,” she said. Henein, famed for her unsparing cross-examinations particularly when eviscerating female complainants and witnesses in sexual assault cases (seen vividly at the 2008 David Frost trial), waved off the singular focus on the “she said” in sexual assault trials. It’s necessary, she pointed out, to uphold fundamental legal principles of “guilt beyond a reasonable doubt” and “innocent until proven guilty”: “Most cases are determined on credibility… That requires a judge to engage in an assessment of it.”

Famous for doing her research, Henein must have found in Mansbridge a softball interrogator, the journalistic equivalent of the nodding dog in the back window of cars. The enterprise could definitely have benefited from the Marie Henein approach. One example was the lack of  follow up on Henein’s rejection that sexual assault cases are different than any other crimes. Another was a lack of questioning  about how the way defence lawyers are able to “discredit” witnesses in sexual assault cases reflects broader cultural biases and stereotypes. Discussing the Ghomeshi trial specifically was off the table as it is still within the 30-day appeal period, which is unfortunate. Anyone in court saw Henein dismantle the first witness, her identity protected by a publication ban, partly on the basis of class and marital status. She painted the woman, who bounced between part-time jobs as a make-up artist and cater-waiter, as foundering career-wise, someone on the fringes of the arts community, a hanger-on taken by Ghomeshi’s “celebrity” (he was then the host of a late-night CBC cable show). She also questioned whether the witness was legally separated from her husband, as she had told police; it’s a detail that should have had no bearing on her account of the alleged assault but went to reliability. The woman told the court a lawyer friend told her that if they lived in separate floors it was legal separation. Henein was comfortable leaning on patronizing clichés: the flaky arts groupie in an unstable marriage.

More from macleans.ca: What I wish I’d known before testifying in the Ghomeshi trial

There was also no Mansbridge redirect to what was the signal revelation of the interview: her statement that although Crown attorneys are typically underfunded, in high-profile cases including Ghomeshi’s they “are very, very well-resourced,” as were the police and witnesses. Where this resourcing was spent is a mystery; it certainly wasn’t evident at trial.

Henein used the national platform to assert that, contrary to the ongoing public conversation, how sexual assault cases are tried is not “in crisis.” At this point, Mansbridge could have referenced the notoriously low reporting rate of sexual assault—unprecedented in any other crime—to suggest that a problem definitely exists. Instead Henein highlighted how easy it is for someone to be accused of a crime and end up requiring her services. She attested that the legal system is “constantly evolving” and “constantly changing,” but was asked for no evidence. Instead, viewers heard vague platitudes about the law being in flux: “That in my view is not a negative thing, provided it’s done in a meaningful way and a way at the end of the day we are actually moving forward and not just getting a 140-character tweet out,” she said. “Because no one changed the world doing that.” Of course, some of those 140-character tweets, and the questions they asked, accounted for why Henein was now sitting before Mansbridge.

Despite the aforementioned reading of critical Facebook posts, there wasn’t much that was adversarial about the exchange. Toward the end of the interview, Henein even congratulated the newsman for asking “Did anybody not get hurt in this case?” It is a “very good question,” she said, choosing not to state the obvious—that the only one not hurt by the case was Marie Henein and co-counsel Danielle Robitaille. Instead, she focused on  the “devastating” criminal court process,” and how Ghomeshi “had his life turned upside down.” Whether this interview was also an attempt  right her client’s life was unclear, but raises questions. Mansbridge, who asked Henein what is in her mind when a case concludes, didn’t bother to follow up when she replied: “I’m thinking about the next case.” Of course, one of those next cases happens to be defending Ghomeshi, in the one remaining charge of sexual assault that allegedly occurred in the CBC workplace, set for trial in June.