In skydiving, a sport filled with big jumps and bigger personalities, Mario was the humble tinkerer 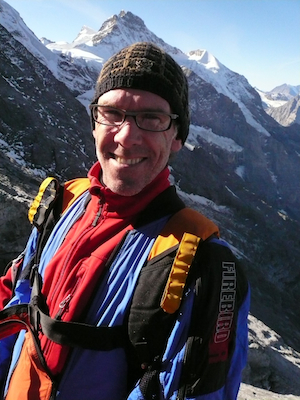 Mario Joseph Richard was born on April 19, 1966 in Quebec City, the youngest of four children born to Jeanne d’Arc, a homemaker, and François Richard, a Corporal in the Canadian Forces. Growing up on the rural Valcartier military base, the blonde, blue-eyed baby of the family (Mireille came first, then Lucie and Réjean) was shy and easygoing, and never wanted to be “master of the show,” says Réjean. As boys, they loved tossing miniature toy soldiers off the roof of the family’s house, packing their plastic parachutes with rocks to see whose figurines could soar the highest before sailing back to earth.

After finishing high school, Mario worked for his brother’s fiberglass company in Trois-Rivières. It was Réjean’s childhood dream to skydive like their soldier figurines, but his baby brother beat him to it.

“I could recognize those who had the flame in their heart, so I recognized it in him very fast,” says fellow skydiver Bertrand Cloutier, who watched an ecstatic Mario land his first 3,500-ft. skydive on the outskirts of Quebec City in 1988.

Mario sold his motorbike to buy his first parachute and started skydiving whenever he could, acquiring his certifications and licenses to become a full-time instructor.

To make his brother’s dream come true, Mario gave Réjean a skydive for his 26th birthday. “He’s my little brother in life, but he’s my big brother in skydiving,” Réjean says.

Always looking for a new adventure, Mario accompanied Bertrand to the 1991 annual Bridge Day at New River Gorge Bridge in West Virginia for his first BASE jump, an extreme sport where jumpers launch themselves from buildings and cliffs, deploying a parachute to break their landing. Mario returned to Quebec and started jumping off everything he could.

When Réjean’s daughters were young, Mario would dress up as Santa at Christmastime and parachute off a 500-foot tower in Trois-Rivières, the delighted girls’ presents in tow.

Mario married in the early 1990s and moved to the booming skydiving scene in DeLand, Florida, where his wife Michele owned a house. He didn’t have a job, but started hanging out at a BASE jumping gear manufacturing shop where he befriended the owner and veteran BASE jumper Marta Empinotti. She eventually gave him a job and moved the company to Moab, Utah, known for its premiere (and legal) BASE jumping sites.

After his marriage deteriorated, Mario returned to Canada in 2000 and co-owned a skydiving school near Quebec City with one of his best friends, Martin Dumas. Smiley faces adorned the staff’s t-shirts, helmets and the jumping plane. When the friends sold their stakes in the business unexpectedly in 2007, Mario felt lost. Four days later, he packed up his car and returned to Moab.

“He was just so happy in the desert and so fulfilled with new adventure everywhere,” Martin says. “It was endless possibilities out there.”

In 2008, while piloting a skydive in a tiny Cessna plane over Moab, he met professional rock climber and BASE jumper Steph Davis. They formed a friendship after he helped her with a climb-jump project at Utah’s Castletown Tower, and friendship quickly turned into love. They married November 2011 and celebrated in style by jumping from the 1,804-metre-high Parrott Mesa summit near their home: he in a white top hat and red bowtie, she in a flower wreath veil.

In a sport filled with big jumps and bigger personalities, Mario was the humble tinkerer. Although he pioneered standard BASE jumping equipment, he wouldn’t talk about his achievements unless asked. “To him, it was just the art of the progression of the sport,” Steph says. He loved working to improve his black wingsuit, which he wore to fly side-by-side with Steph over the Moab desert. It was his “favourite skydive,” he would recount on his blog.

Criticism of his beloved but dangerous sports pushed Mario to take the utmost precautions. He was a “calculated, careful and respectful jumper,” Steph says, and would climb down from a jump if the conditions were unsafe. Mario claimed to have made over 7,000 skydives and 2,000 B.A.S.E jumps all over the world, all without sustaining a single injury.

“Mario would be the first to say that BASE jumping is dangerous, but at the same time his goal in life was to be safe,” Steph says.

Mario and Steph started the excursion business Moab BASE Adventures together in 2011 with photographer Chris Hunter and travelled the world together, jumping everywhere from the French Alps to Mount Tianmen in China.

Mario called home to Quebec on holidays and never forgot a birthday, mailing postcards and trinkets from his travels to his family. “He was always sending pictures from everywhere in the world, flying like an angel with wings,” recalls his niece Valérie.

When Mario returned to Quebec this July to visit his family, he and Réjean visited friends at one of Mario’s old drop zone haunts. As Réjean executed a tandem jump with another passenger, Mario swooped in alongside him in his black wingsuit.

“He passed real slowly beside me like I never saw a wingsuit do before,” Réjean says.

In August, Steph and Mario embarked on their annual European vacation, doing jumps in Switzerland before heading to the Sass Pordoi in the Italian Dolomites, a favourite peak they had leaped from two years earlier. Mario became concerned on the trip that his contact lens prescription was changing, and planned to visit the optometrist when be returned to the U.S.

On Aug. 19, on their third jump of the day, Steph leaped off the cliff first in her pink wingsuit, landing safely on the ground 9,700 feet below. “It still doesn’t make sense” what happened next, says Steph, but Mario’s vision may have failed him as he executed his own jump. He failed to clear a cliff by just a few metres and hit a rock connecting two mountains. He was 47.