An athletic and handsome boy, he lost his way until a new job uncovered a hidden talent 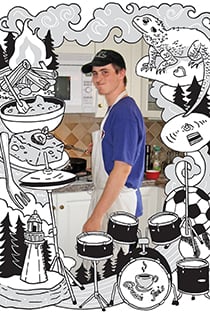 Matthew Gordon Bartlett was born on Feb. 12, 1994, in Grand Bank, N.L., to Paul, a music teacher in nearby Fortune, and Dawn, a hair stylist. The youngest of three, Matty was a beautiful child with sandy-blond hair, long lashes and deep dimples. “They almost became a nemesis to him, because of how many times people squeezed his cheeks,” says Paul. Matthew would try to hide the dimples with his fingers when he smiled.

Life in the hamlet was idyllic, and the three Bartlett children would spend hours exploring the nearby woods. After the family moved to St. John’s when Matty was in kindergarten, he took quickly to sports, playing soccer and basketball, and figure skating in a pair of vintage skates. “Matty literally got on a bike one day and all of a sudden, he could ride it,” says older sister Hilary. An animal lover, his favourite spot was on the dog bed with the family’s miniature schnauzer. He loved music, learning guitar and piano and buying himself a mandolin. But his passion was the drums.

It was at the start of high school that Matty began to drift. He struggled to fit into the social cliques and dropped out during Grade 10. He fell into drugs, lost weight and disappeared for days at a time. He took non-conforming to the extreme, drawing his own tattoos from a sewing needle and pen ink. When he made a mistake, he would simply scratch it out and start again. His motto, “live free,” was professionally tattooed on his wrist, though he preferred his own creations.

After an attempt to dye his hair green went awry, he rebuffed his mom’s offers to fix it. “I know you don’t care how it looks, but when people see it, they’ll think I’ve done it,” she said, and he relented. Last Christmas, Hilary convinced Matty to do a sibling portrait with a mall Santa and he arrived wearing a cut-off tank top emblazoned with guns and needles. But beneath the tough exterior were glimpses of a sensitive soul. Once, Hilary picked him up after a late night and he started to cry, confessing he had fallen asleep with one of his beloved pet lizards on his chest, and had rolled over on it. “He was all prickles and thorns on the outside,” she says. “But on the inside, he was squishy-soft.”

The two had grown close after Hilary got Matty a job in the dish pit of a local restaurant where she worked. She would keep tabs on him for their parents, sometimes bringing him to her home and forcing him to shower, eat and sleep. When he got angry, she would wrap her arms tightly around him until he calmed down. “I hugged that boy every time I saw him,” she says. “I don’t know what I did right to help him, but I feel like I got to know all of him.”

Eventually, Paul and Dawn convinced Matty to see an addictions counsellor. He completed several high school credits and later enrolled in the Murphy Centre, an alternative school. He pledged to finish high school as a way of encouraging a friend to do the same.

In November, he got a job at Gracie Joe’s restaurant. Though he was hired as a dishwasher, he quickly proved to be a natural with food. “Here’s this 19-year-old kid, cooking dinner for 20 to 30 people and it’s going off like clockwork,” says owner Alfred Hynes. His real talent, though, was baking. He invented a sugarless, gluten-free brownie that was a hit with customers. One night, Hynes asked Matty to stay an hour after closing to prepare for the week. He stayed for four hours, baking six cakes and 12 pans of brownies.

Work and counselling were a calming influence on Matty. He talked of backpacking around the world, and his first trip was to be six weeks in Thailand, starting this month. “As far as we knew, those bad days were over with,” says Paul.

On Saturday, April 27, after working 15 days straight, Matty asked for Monday off to go hiking with some old friends. It was a passion forged during his early days in Grand Bank. “He always smelled of campfire,” says Hilary. That morning, they all headed out on a section of the East Coast Trail known as Tinker’s Point, on the southern shore of the Avalon Peninsula. He bounded ahead of his friends, six metres off the trail, through a thicket of trees that concealed the edge of a cliff. He fell, head-first, 12 m down to the rocky shoreline. Before friends could reach him, he was swept away by a wave. Firefighters found him hours later, washed up on the shore. He was 19.