Meet the man who became the dean of sports mascot makers

From 2015: How a Quebecer who played Youppi!, the Montreal Canadiens' mascot, became one of the world’s most renowned mascot makers 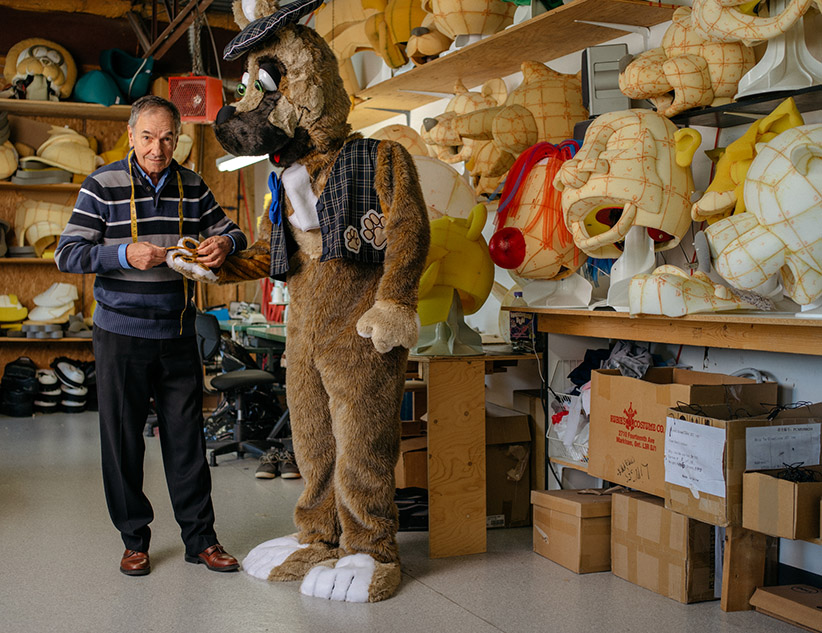 The first rule of being a mascot is: Never take your head off. The second: The mascot doesn’t talk.

Which is why, if one asks the Montreal Canadiens about interviewing the man or woman who will embody Youppi! for the upcoming NHL season, the request will be politely declined. “We do not authorize our various mascot ‘players’ to be interviewed or to speak about their role with us,” explains the team’s media-relations director, Dominick Saillant, in an email. “We really want to preserve the magic of Youppi!”

There are plenty more rules about being a mascot, and Jean-Claude Tremblay knows them all by heart: how to properly clean the outfits (never put them in the dryer), how to walk, and how to sign autographs as an oversized furry character. After all, the 68-year-old Quebecer wrote the book on it: Le monde de la mascotte (The World of the Mascot).

In a world where fame goes to characters such as Youppi!, the Philly Phanatic or the San Diego Chicken, under all that fur there are few like Tremblay, who is one of the world’s most renowned mascot makers.

Tremblay’s creations include the Ottawa Senators’ Spartacat, Badaboum of the Quebec Nordiques (though its original name was Boom Boom), Touché from the CFL’s Montreal Alouettes. When Sports Illustrated bought a professional basketball team in Vermont, it quickly went to Tremblay—whom the magazine referred to as “the dean of mascot makers.” Needless to say, when Youppi! joined hockey’s Montreal Canadiens 10 years ago (after serving for the Expos from 1979 to 2004), Tremblay was tasked with the modifications needed to make him a hockey mascot instead of a baseball one. 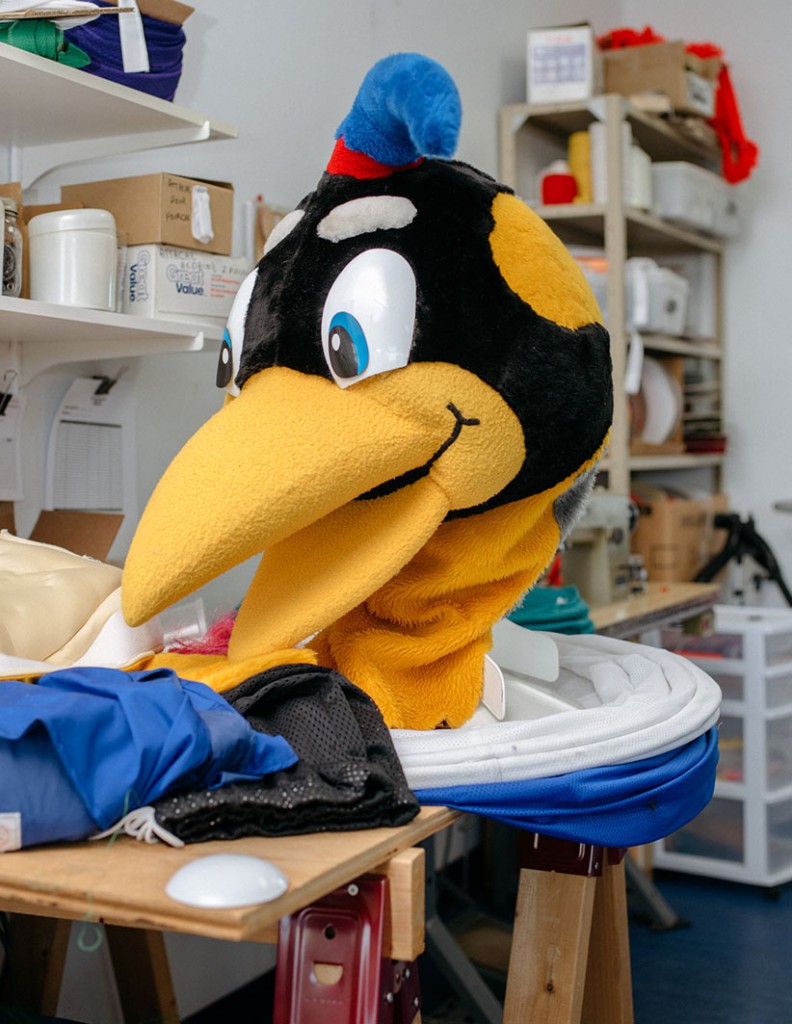 Tremblay came to the job accidentally. After teaching art at a penitentiary outside Montreal for almost a decade, he lost his job in the late 1970s during budget cuts. In his mid-30s at the time and with two kids, he needed a job to support his family, so he took up an offer from his brother, who worked with the Expos organization.

The Major League Baseball team needed someone who could find a way to clean the costume of Youppi!—originally designed by Bonnie Erickson, who had once worked for the Muppets creator Jim Henson—from the plush orange fur head to the oversized shoes. So Tremblay cleaned the costume, but when he stepped inside the outfit, he became everything a mascot should be: approachable and funny, with an ability to improvise. The team decided to give him a shot at performing on game days.

It wasn’t easy work. When his son Dominic came to the ballpark, he had to keep tabs on his young son who followed him around Olympic Stadium. It was hot inside the costume and Tremblay had to stay in top shape himself. “Every time Tim Raines stole a base,” he explains of the legendary Expos player, “I had to steal a base, too—on the dugout.”

While working as Youppi! Tremblay learned the nuances of becoming a world-class mascot. “You don’t do the wave in the first inning. People aren’t drunk enough,” he says. “Not drunk on alcohol, drunk on baseball.” And in the ninth inning, if the home team is winning, he adds, a mascot must be far away from the pitcher’s sightlines for fear of distracting him. What matters more than a couple of photos of loving fans with a mascot is making sure the home team leaves victorious.

Spending hours inside mascots for sports teams, as well as local radio stations, Tremblay came to know the outfits’ inefficiencies. “My costume with CJMF [Radio] was 60 lb.,” he remembers. So he started tinkering with them, switching out the heavy snaps around the arms and wrists for Velcro, for example, which shaved off a pound or two of weight.

With his connections in the sports world and his background in art, Tremblay started his mascot-making company, Créations JCT, in 1983. He also began offering mascot courses, and his most successful students were loyal to his teaching. Trained by Tremblay, Pierre Deschesnes moved to the U.S. to work as a mascot for several baseball and hockey teams. Deschesnes says he was a star down south because of one noticeable advantage: He could skate while wearing a mascot uniform. But, as a follower of Tremblay’s advice, he refused to do interviews with media who wanted to speak with the man, and not the mascot.

Now living in Denver, Deschesnes has his own mascot company, Pro Mascot, but has the costumes made at Tremblay’s suburban Montreal factory by 15 full-time production workers. “The best mascot makers in the world are in Canada,” Deschesnes says. The Toronto Blue Jays mascot, Ace, for example, comes from Sugar’s Mascot Costumes in Toronto, while Edmonton-based International Mascot Corporation teamed up with Kellogg this summer to make 10 Tony the Tiger mascot uniforms for the Little League World Series.

Créations JCT creates 150 to 200 mascot costumes a year—often for sports teams, corporations and festivals—which can cost anywhere from $3,500 to $5,000. The business has come a long way from when Tremblay drew the designs by hand and cut the mascots’ noses with an exacto knife. Nowadays, Tremblay’s 3D designs are done via computer—with a helping hand on the software from his younger son, Max—and a special machine does the moulds for the oversized eyes.

As for weight, most are about seven kilograms. “It’s lighter than a hockey uniform,” says son Dominic, who has taken over the day-to-day operations from his dad. The outfits are also now fitted with fans run by silent motors that bring in much-needed cool air for the performers. 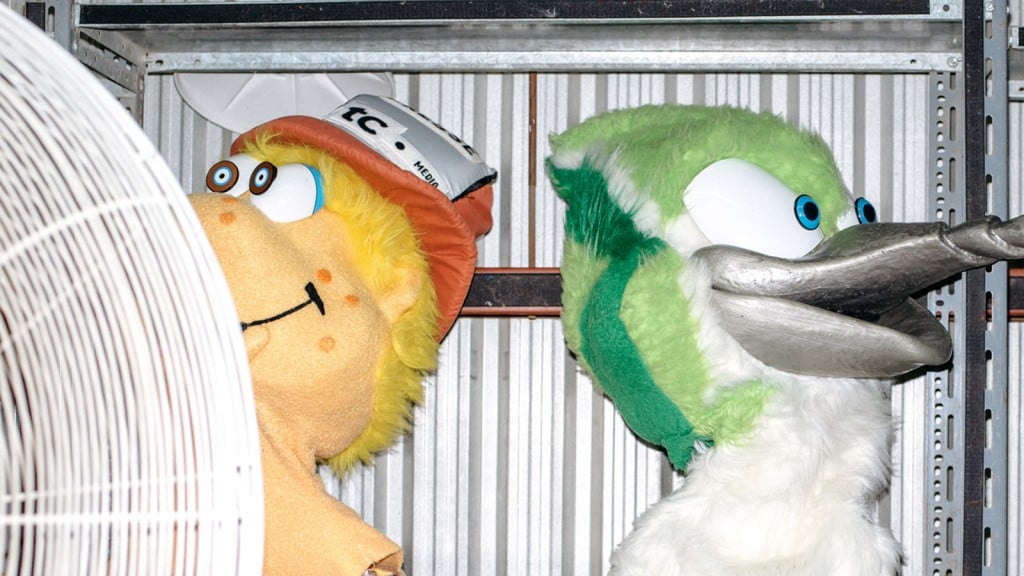 The life of a mascot performer isn’t easy. While soft and cuddly—and always up for a photo opportunity—mascots are often in the line of fire. Tremblay points to the many high school movies in which the school’s mascot gets beaten up as comic relief. Even Bell Mobility got in the fun in 2002 with a series of ads featuring kids pushing, shoving and stealing the heads from mascots. It’s funny, sure, says Dominic, but many people forgot there’s a person inside the costume. Mascots became frequent victims of rowdy teenagers, which is why most mascots today walk around with spotters.

Mascots themselves have faced charges. Once, as Youppi!, Tremblay was falsely accused of stealing a woman’s ring. In 2015, a Missouri man sought $300,000 from the Kansas City Royals, claiming he was injured in 2009 when Sluggerrr, the team’s mascot, threw a hot dog that hit him in the eye and caused his retina to detach. A jury found the Royals and Sluggerrr were not at fault.

With the danger of teenagers run amok, the challenge of dancing in sweltering heat and the threat of lawsuits, many wouldn’t consider the job of a mascot fun, especially given its lack of personal recognition. But people like Tremblay look past the negatives and see a beloved mascot dancing on the dugout, giving high-fives to fans and smiling children. “When a kid open his arms and kisses you on the nose, this is something special,” he says. Maybe only one thing could be better. “Can you imagine if the Canadiens win the Stanley Cup—and you’re Youppi!?”