Meet the University of Saskatchewan student behind Canada's COVID-19 tracker

When the pandemic started, Noah Little created a website to keep track of rising case numbers. Today, it’s one of Canada’s most-viewed sources of COVID information. 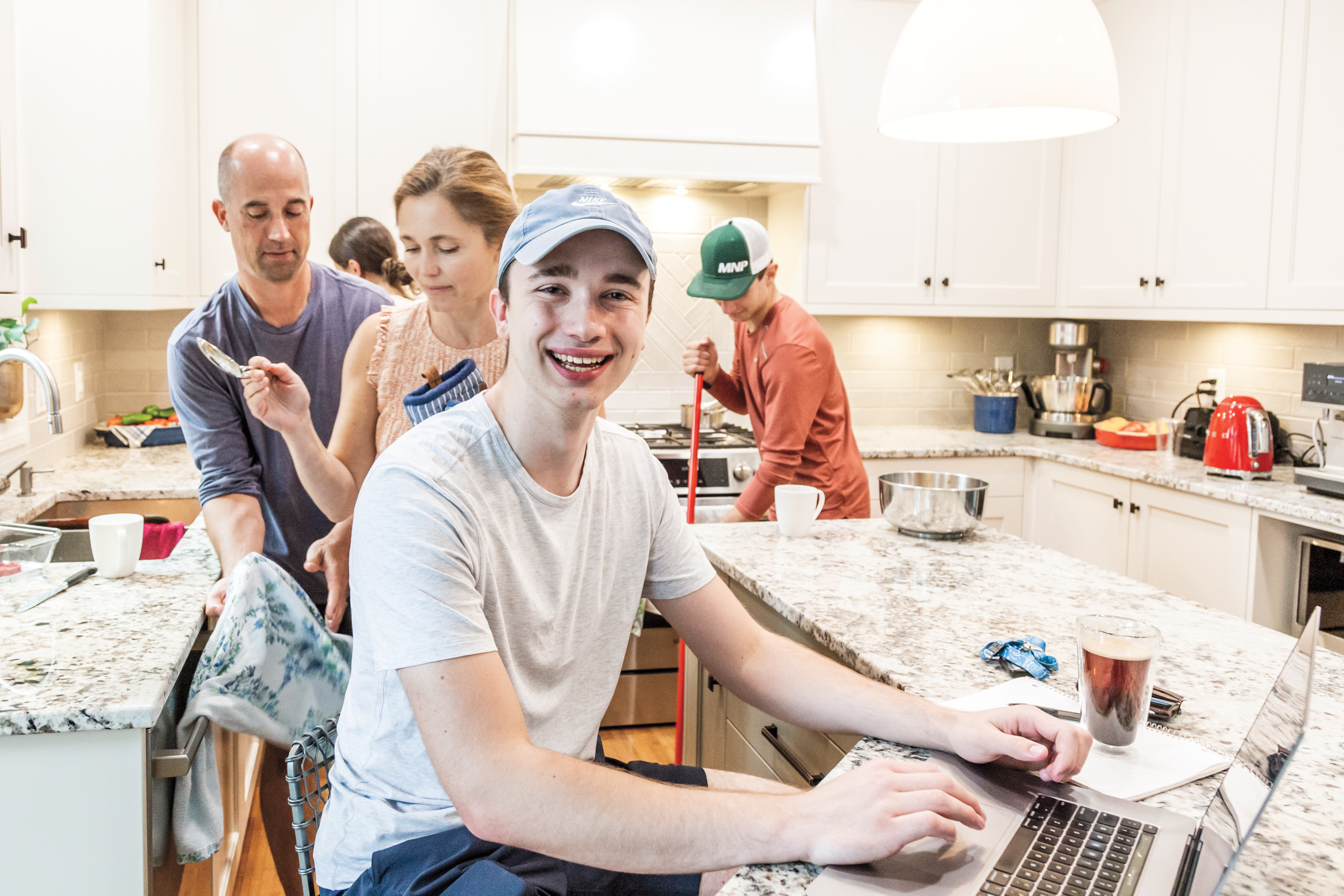 Little likes to work in the bustle of his family’s kitchen, which he says keeps him on track (Photograph by Carey Shaw)

There wasn’t one case of COVID-19 in his home province of Saskatchewan when Noah Little started collecting pandemic data on March 8, 2020. With just 67 cases in all of Canada, there were no provincial or national dashboards displaying the latest numbers of cases, hospitalizations or deaths. So Little, then a second-year undergrad studying biomedical neuroscience at the University of Saskatchewan, “put together a little something” to start keeping track. And almost overnight, his website, COVID-19 Tracker Canada, “got a bit more popular,” he recalls.

That’s an understatement. By June 2021, it was averaging 3.4 million hits a week and had become so essential to determining how Canada is faring that Our World in Data, a site that gathers numbers on the pandemic from around the world, started using data from Little’s site in its own vaccine and hospitalization charts. “If you google ‘vaccines in Canada,’ it’s our data,” says Little, noting that the search engine uses Our World in Data graphics.

Little is part of a coterie of ad hoc groups and individuals who filled the pandemic data chasm created by a patchwork of government sources across the country. His constantly refreshed statistics, combined with sleek interactive graphics and the ability to automatically download updates, set his website apart. Trevor Tombe, an economics professor at the University of Calgary, uses it for his own popular charting of Canada’s vaccine efforts. “Data can be as detailed as you want, but if it is hard to access and use, then it has little value,” explains Tombe. “Noah’s data is both detailed, timely and accessible. It’s brilliant.”

READ: How do I get my vaccine passport? Where will I need to show it?

It’s also a lot of work. Little, helped by a small group of volunteers, gathers the data manually, striving to post it as soon as it’s available. (The group explored scraping solutions but those proved unworkable, often glitching when governments tweaked website coding.) To get vaccine data from Ontario, for instance, Little goes to the websites of the province’s 34 public health units. Updating the website takes a total of three or four hours each day, which is broken up into many, many 10-minute chunks. “I’m organized where it counts,” says Little.

And he’s been doing it all from the kitchen island of his family home in Saskatoon. “I like to work with noise and activity,” he says. “It helps me stay on track.” Little lives with his parents, a younger brother who is in high school and one of his two older sisters, who is in law school. His equipment: a laptop and iPad.

Even while spending hours on the site, Little continued with his university courses. The online structure gave him the flexibility to plan his academic work around the provincial COVID update times, leaving evenings generally free for coursework or site upgrades. Still, the daily grind of the website meant something had to give. So while he was teaching piano and working during the summer, he didn’t have time to beef up his medical school application with a research job or published papers. But he has no regrets: “At the end of the day, you have to weigh the pros and cons, and this is definitely a pro and a win.”

MORE: Inside the global race against COVID-19 mutations

His family understands the importance of the real-world aspects of his work, though Little admits that the job of updating the site can be a handy excuse, especially when it’s time to exercise the family’s Bernese mountain dog: “Oh, someone needs to walk Sophie? I can’t because I’m doing Saskatchewan,” he says, laughing.

Along the way, he’s learned the importance of consistency and perseverance. In the summer of 2020, even when case counts were low, Little kept updating the data, including on his sister’s wedding day. He expanded the site, launching a vaccine tracker as soon as doses began arriving in Canada last December. Traffic exploded as Canadians, eager for good news, kept checking vaccine statistics. Little eventually added a donation button to help cover his costs of around $400 a month, and now gets enough contributions that he’s no longer paying out of pocket to maintain the site.

“At the start I wanted to do everything myself,” he says. “If I had to do it over, I would have accepted more offers for help earlier on.” One key offer came from Andrew Thong, 36, a design technologist in Vancouver. Thong spent three weeks rebuilding the back end of the site to handle not only the increase in traffic but also the growing amount of data. “Both my younger brothers are nurses on the frontlines,” says Thong. “So, this has given me an opportunity to do a little bit more.”

READ: COVID vaccines for children are almost here. How well have we protected the kids so far?

Little credits previous coursework involving statistics and data visualizations with helping him make the data clear and the sourcing of his data transparent. And he thinks his newly honed interest in epidemiology could play a role in his eventual medical career.

“A big lesson [of this process] would be not to undersell yourself because, even if it seems like something is just completely out of your scope or it’s not something you think you can do well,” he says, “you probably can if you focus on it, work hard and have good support.”

This article appears in print in the 2022 University Rankings issue of Maclean’s magazine with the headline, “Data for a nation.”