Anne Kingston: The first lady signals with actions what she won't with words—that she shares the world's distaste for the man she wed 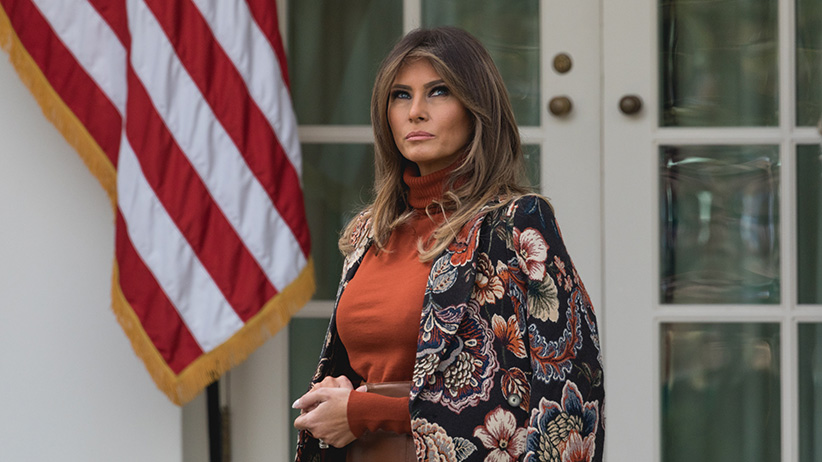 Melania Trump at the National Thanksgiving Turkey Pardoning Ceremony, in the Rose Garden of the White House (Cheriss May/NurPhoto/Getty Images)

As tens of thousands marched through Washington on Saturday in the second Women’s March, only blocks away a woman who would never join their ranks appeared to stage her own small act of resistance. As @FLOTUS, Melania Trump commemorated the first anniversary of her husband’s inauguration with a tweet that failed to reference the Narcissist-in-Chief: “This has been a year filled with many wonderful moments,” it read. “I’ve enjoyed the people I’ve been lucky enough to meet throughout our great country & the world!”  The accompanying photo showed the first lady at the Inauguration accompanied by a young, handsome military escort.

That social-media shade was followed two days later with news that Melania would not, as previously announced, accompany her husband to the World Economic Forum in Davos. “Scheduling and logistical issues” were cited, an excuse no one bought. Conclusions were jumped to, the obvious one that the first lady was furious at her husband, or alternatively “humiliated,” over recent reports that Trump had a sexual fling 10 years ago, shortly after she gave birth to their son—an affair Trump denies, and one the Trump campaign reportedly suppressed with $130,000 in hush money.

RELATED: The meaning of Melania, on the U.S. right’s first night

What constitutes truth in the Trump White House, of course, is a mystery. But the notion that the first lady is stealthily striking back against the world’s foremost misogynist and bully dovetails nicely with the #MeToo moment, one in which Melania Trump has emerged as an enigma. This is a woman who literally lives at the epicentre of the status quo that galvanized the women-led resistance. Yet she is routinely subjected to sexist treatment from without, as well. She’s either depicted as a captive without agency, giving rise to #FreeMelania; or dismissed as a extension of the Trump brand—a decorous symbol and benefactor of her husband’s wealth. On Thursday came news the Guggenheim Museum rejected the first lady’s request for a Van Gogh for the White House, instead offering her a gold-plated toilet. Certainly she has played the wifely appendage, complicit in parroting Trumpian views: she defended “birtherism” in one interview and was unsympathetic to the plight of immigrants, of which she is one, in another. After her husband’s “grab ’em by the pussy” remark, she dutifully trotted out to defend him; she has called the 17 women who accuse her husband of sexual assault “liars.”

Dynamics shifted post-election, as Melania Trump has emerged the most reluctant first lady since Bess Truman. Perversely, she’s a trailblazer of sorts in refusing to play the fossilized role. She broke with protocol by not moving into the White House for six months, ostensibly because of their 10-year old son’s school schedule, but more likely to avoid The Donald. As her step-daughter Ivanka assumed the hybrid first daughter-first lady role, Melania has emerged a silent cipher, her absurd pledge to take on cyber-bullying long forgotten.

Yet she can’t escape the fact that the American First Couple exist as exemplars of the institution of marriage—for better or for worse. And here, the Trumps’  joyless and clearly troubled union stands in stark contrast to the Obamas’ vibrant, affectionate and equitable partnership. Trump’s disrespect for women is writ large in his treatment of his wife. His behaviour on Inauguration Day foreshadowed the “Donald Trump First” doctrine that defines his presidency. When the couple visited the Obamas in the White House in the early morning, Donald Trump, rudely left his wife behind as he barrelled through the front door. During the ceremony, Melania’s fake smile that turned to a frown when her husband’s back turned was recognizable to anyone familiar with abusive relationships. The couple didn’t even bother to muster a happy expression while dancing stiffly during the Inaguration Ball.

By November, her tour of the White House decorated for the holidays—a silvery, chilly Siberian fever dream—inspired memes and appeared a perfect metaphor for the ice-palace of the Trump marriage. One outlet brought in body language experts to dissect the couple’s Christmas portrait. The verdict: her hand in a fist “shows anxiety and self-control,” while Trump’s palm placement “indicates control over her and an authoritative presence.”

RELATED: The Trump marriage: A Housewife of New York and The Bachelor

For all of the “Free Melania” signs evident at the first Women’s March, however, actual empathy for Melania Trump isn’t abundant. She’s vilified as a gold-digger—someone who knew exactly what she was getting into, even though though no one could have predicted when they wed that Donald Trump would ever occupy the White House. As CNN put it this week: “It’s a little hard to feel bad for a woman apparently willing to trade her good looks and basic respect for her philandering husband’s financial largess.” Yet the same accusation that wouldn’t be levied at other women, or men, who end up in a relationship with a known bully with anger issues. In her case, there are extenuating circumstances that reveal the American Dream her husband is working to dismantle. The daughter of a former Communist Party member, Melania grew up in Slovenia; her beauty offered an escape from drab future prospects; Donald Trump, a man who once told Howard Stern that his “checkout time” for a woman was when she hit age 35, offered another exit strategy, one that allowed her parents to come to the U.S. She is Trump’s third wife; his first, Ivana accused him of raping her in a rage, charges she later rescinded.

For young women, Melania serves as  a cautionary tale, a reminder of the old adage: “When you marry for money, you earn every penny.” And increasingly, in small ways, she is showing the world she shares its distaste for the man she wed. In May, she famously swatted her husband’s hand away from her on a visit to Israel. In another odd, defiant twist, @FLOTUS  follows only five Twitter accounts: two associated with her  husband, that of VP Mike Pence and his wife Karen. The fifth is Barack Obama. That means she would have been privy to the former president’s gushy social media homage to his wife last week —and Michelle Obama’s response with a photo of the flowers he’d sent. It did not go unnoticed that Melania announced she wouldn’t be attending Davos on her 13th wedding anniversary, an occasion unmarked in any public manner.

Meanwhile in Switzerland, Melania was discussed with more interest than her husband warranted. The actor Cate Blanchett joked about possibly playing the first lady: “What’s her position as a woman? What does she think? What’s it like being married to—you know.” On Wednesday in the New York Times, Meryl Streep also called for Melania to speak up: “I don’t want to hear about the silence of me,” she said. “I want to hear about the silence of Melania Trump. I want to hear from her. She has so much that’s valuable to say. And so does Ivanka. I want her to speak now.”

For now, the first lady appears to be communicating through actions. On Thursday, her husband off to Davos, she visited the U.S. Holocaust Memorial Museum in Washington, unaccompanied by media. Afterward, she issued a statement that said in part: “My thoughts and prayers are with the people whose lives and families were broken by the horrors of the Holocaust.”  Whether it was a rebuke to an administration that has enabled white supremacists and Neo-Nazis, we don’t know. Melania then flew to Florida, alone and clearly unburdened by schedules or logistics.