A funnyman and confessed ‘mama’s boy,’ he landed 2,500 parachute jumps with never a hint of fear 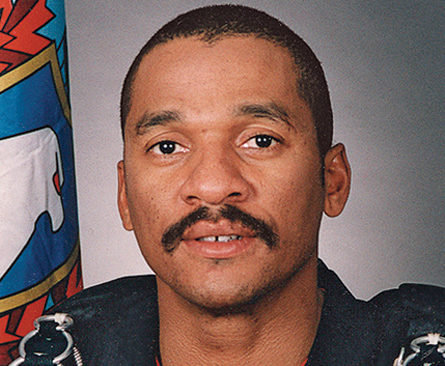 Michael Edward Hamilton was born on Dec. 11, 1962, in Halifax. He was the second of four kids—including Lorraine, Lenora and James—born to Gerald, a member of the Canadian Forces, and Greta. A base brat, Mike bounced from Gagetown, N.B., to Baden-Soellingen in Germany, to Calgary, Edmonton, then Petawawa, Ont., before returning to Nova Scotia, where he graduated high school at Cobequid Educational Centre in Truro. Changing schools, teams and friends every three years didn’t phase Mike, a “good-humoured,” natural athlete, says Greta. “He loved moving around.”

His parents pushed hard to dissuade Mike from following in his father’s footsteps: “You know the service life. Go and get a taste of civvy street,” Gerald advised. But two weeks after picking up his diploma, Mike—a confessed “mama’s boy”—signed up. At first, Greta didn’t believe him: “He was always clowning around,” she explains. Before her head stopped spinning, Mike was off to basic training in Cornwall.

From 1985 on, Mike wore a maroon beret, the international symbol of elite airborne forces. He was a parachute rigger—a jumper who also packs and maintains chutes, says fellow rigger Kurt Harris, who calls it “the ultimate in quality control.”

At 27, when stationed at Petawawa, Mike met Shelley, who’d moved to nearby Pembroke. Their first date began at her grandmother’s, where Shelley was living. On the way out the door, he grabbed her in a quick hug and whispered in her ear, “I’m going to marry you.” Within a year they were engaged, and on May 2, 1992, wed at St. George’s, the base chapel. Two children, Alicia and Cole, soon joined Leon and Rodney, Mike’s sons from a seven-year relationship that had gone south.

From 1989 to 1992, Mike served as a service commando with the Canadian Airborne Regiment, an all-volunteer force housing the military’s finest—Canada’s answer to the American Green Berets (though the regiment was disbanded in disgrace after the 1993 murder of Somali teen Shidane Arone). He later joined the SkyHawks, the Forces’ elite, 15-member parachute demonstration team.

Fearless with authority figures, Mike was “revered” by his peers, says Ross Prophet, who received his parachute training from him. When Gen. Rick Hillier, then chief of the defence staff, visited CFB Trenton, everyone was so intimidated they just stood there, silent and sweating, says Ross. Mike, meanwhile, carried on “like he was at the bar with his buddy Rick,” dissing Hillier’s support for the Maple Leafs over his beloved Habs. On receiving a medal for honourable service, Mike, a noted funnyman, was “laughing away”—and even had the officer pinning the medal on him laughing, says Greta. “The Forces are serious,” she adds. “You don’t smile: you stand at attention.”

Whether in the SkyHawks or as part of the army’s Airborne Trials and Evaluations Section (which develops and tests airborne equipment), Mike was always looking out for his unit—consequences be damned, says Ross. When a superior came up with a “hare-brained” idea that he thought dangerous, Mike never failed to put his foot down. (In the military, most stay silent rather than risk angering their superiors or hurting their careers, says Ross.) Often, superiors chose to appease him. “You kept Hammy on your good side—the guy just got it done, because people would go the extra mile for him,” says Ross.

If Hammy was nervous jumping face-first from a plane, or hurtling toward earth at 200 km per hour, it never showed. He’d sit at the back of the plane at 10,000 feet, his feet hanging from the open ramp—“as though he were sitting on a wharf, dangling his feet in the water,” says Ross. But Shelley hid a gnawing case of nerves whenever he left for a jump. Once, in Cobourg, Ont., as he entered his final approach, Mike was hit with a “rotor,” a top-down swirl of wind that collapsed his chute, dropping him to earth from 40 feet. His leg snapped in two places, but as soon as the pins and plates were in place, he was back in the air. Accidents didn’t scare him.

On Feb. 20, Mike flew to Cold Lake, Alta., to test U.S.-made precision equipment destined for use in Afghanistan. After landing safely, he headed out with three friends. “With all the chatting and talking and laughing in the car,” the driver missed a stop sign, and was T-boned by a second vehicle, says Ross. Mike, who Shelley notes had landed 2,500 jumps, bore the brunt of the impact, and died on the table at Edmonton’s Royal Alexandra Hospital. He was 46.