Michael Richard Bleakney: 'A man with a purpose,' he never sat still 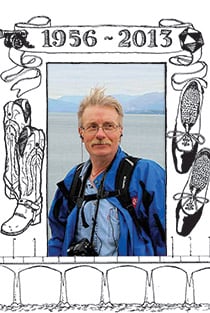 Michael Richard Bleakney was born in Perth-Andover, N.B., on Aug. 1, 1956 to Carl Murray Bleakney, a technologist, and Rena Elaine Elliott, a homemaker. The eldest of five children, Michael grew up in Forest Hill, a burgeoning suburb of Fredericton filled with young families. Older and much taller than most of the kids in the area, Michael became known as the “gentle giant”—the one who tied shoelaces, bandaged skinned knees and settled disputes on the playground. He once brought home the runt of the litter of a neighbour’s kittens because nobody wanted it. “Stubby,” small and tailless, lived to be 20 years old.

Michael skipped most of Grade 1, and graduated from high school at 15. At 16, he enrolled in the engineering program of the University of New Brunswick. Along with his roommates, Michael devised a game called Armageddon, a live-action combination of Risk and Dungeons and Dragons played in a spare room in their house. A war in Europe lasted days; a world war could stretch on for weeks. It took eight years for Michael to earn his engineering degree.

The first time Kathryn Elliott saw him stroll across campus, he was wearing jeans, a woven vest over a blue collared shirt, and an army jacket. He had thick-rimmed glasses and shoulder-length blond hair and carried a black briefcase. “There is a man with a purpose,” she thought to herself. While completing his degree, Michael worked for a construction company. He met Kathryn in a work-site trailer—she was a road flagger, he was the site manager—and helped her with her tax forms. They married in 1981, and had four children.

After university, Michael worked as a geotechnical engineer for the New Brunswick government. Among other projects, he did post-construction monitoring of the Confederation Bridge to Prince Edward Island. In 2001, he won a jobs competition for the position of senior geotechnical engineer with Public Works Canada, which would mean moving to Ottawa. He was iffy, because he loved New Brunswick. His wife, knowing Michael lived for bigger challenges, convinced him to take it. The Bleakneys moved to the Ottawa suburb of Barrhaven that year.

Michael’s new job took him to the heights of Ottawa’s bridges and the bowels of Parliament Hill. He was the technical adviser on the three main bridges crossing between Ottawa and Gatineau. Recently, he was the lead technical engineer on the massive dig underneath the West Block, over top of which a temporary House of Commons will be housed as the real thing is renovated.

He sang in four choirs, ballroom danced with Kathryn, learned Gaelic and, in the rare time he stood still, enjoyed sampling scotches—16-year-old Lagavulin especially. Last summer, unable to further their ballroom dancing classes, he and co-worker Ravi Sundararaj and their wives signed up for line dancing at Ottawa’s Chinese Community Centre. The six-foot-two Michael found himself learning a Chinese take on the country and western hoedown at the back of a crowd of mostly Asian women. “I feel like Napoleon Dynamite,” he said to Ravi. The instructor was so impressed with his nerve that she arranged the rest of the class so that he was in front. In 2011, he said he’d take his wife to Scotland for a choir competition if she learned Gaelic and sang in a choir. She did both, and their choir came in third place.

Two years ago, after reading a newspaper article about the perils of sitting at a desk all day, Michael decided he would stand. “Damned if I’m going to die sitting down,” he said. It became an office-wide bet: when would Bleakney sit down? No one ever collected, because Bleakney never did. One day, Bleakney, 260-lb., and an equally beefy colleague once had to cram into a rented subcompact. He decided then he would lose 60 lb. Three years later, he’d lost 70. His secret was Weight Watchers and biking the 25 km from Barrhaven to Ottawa and back. If he was late he’d load his bike on the front of the bus.

On Sept. 18, Michael was standing on the stairs near the front of a double-decker bus en route to Ottawa. Standing in front of him was Romi Gupta, who got on the stop after him. Holding onto the same pole, she and Michael chatted. He told her about the new lime green bike jacket he was wearing, and she noted how it matched his helmet. He mentioned how he thought the bus driver was going a little fast, and asked Romi to switch spots with him. He was a bit tall for the stairs, and wanted to keep an eye on his bike. Moments later, the bus driver failed to stop at a railway crossing and collided with a train. Michael and four other passengers, along with the bus driver, were killed. He was 57. Romi survived.