From the day he bought his first bike, at 18, he was devoted to riding. A man surrounded by friends, he loved riding alone. 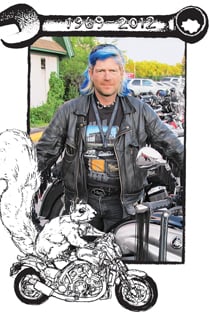 Michael Richard Roberge was born in Winnipeg on Dec. 12, 1969, to Doreen Gowler and John Roberge. John and Doreen split up when Michael was five, and Doreen, a typesetter with the Winnipeg Free Press, raised Michael and his younger brother, Gordon. Michael was a talkative boy, always surrounded by a large group of friends in and out of his childhood home in the neighbourhood of Crescentwood. “He could go up to anyone to shake their hand,” Doreen says. He also loved riding his bike, the beginning of a lifelong passion.

The Roberge brothers were close with Doreen’s parents, Gordon and Beryl McLure, and often spent the night at their grandparents’ home. The McLures’ house was on a wide lot, and Gordon would take the boys on his riding lawnmower, a thrill when they were young. In the summers, they’d go to their grandparents’ cottage in Grand Beach for two weeks. Visits to Lanky’s, a food stand in the area, became a tradition: even as an adult, Michael made yearly visits for the two-foot-long hot dogs.

As a boy, Michael didn’t like school very much. “He never brought homework home,” Doreen says. What he did like was working: at 13, he went to all the fast-food restaurants in search of a job. By 14, he had started working at Chicken Delight. “He was never lazy,” Doreen says. “He wanted to earn his own money.”

At 18 he bought his first motorcycle. “I never liked motorcycles from day one,” Doreen says. But Michael, who had always wanted a dirt bike, had a mind of his own. As a single mother, Doreen wasn’t able to take the time out to get her son a dirt bike. From the time he got his motorcycle, however, it seemed that Michael was always riding.

After Michael graduated from Grant Park High School in 1988, he went on to earn a Red Seal Journeyman Certificate, a trade apprenticeship, from Red River College in Winnipeg. He was at the top of his class, and received an award for Journeyman of the Year. From there, he worked as a trailer mechanic for trucking companies in Winnipeg, including Bison Transport and Ocean Trailer.

In the summer of 1990, Michael met Tyler Bartel, a fellow rider, through mutual friends. They started taking summer rides together. Their first trip took them to the Black Hills of South Dakota in 2004. Over the years, they went everywhere from Prince Edward Island to Vancouver Island. Although Michael took many of these vacations with Tyler, he preferred to travel solo. “Others slowed him down,” Tyler says. “He liked to get out and see things.”

Michael, with his signature look, was always easy to spot. He wore his blond hair shoulder-length with a thick blue streak, something he’d started doing in the early 2000s. He also always wore leather cuffs that he made himself.

Some knew Michael better as “Squirrel,” a moniker he gave himself as his CB radio handle in the early 1990s. “It became who he was,” Tyler says. Many friends didn’t even know his real name. Gregarious as ever, he’d host parties every few weeks at his home in northern Winnipeg, still working as a trailer mechanic, inviting friends he knew from his local watering hole, The Marion Hotel, near St. Boniface.

He may have been involved in biker culture, but he didn’t have the gruff biker attitude. Michael was always ready to help out his friends. Tyler remembers how Michael once left work to find him when Tyler’s bike broke down five miles away, and helped him fix up his bike on the side of the road.

Tyler moved to Bermuda over a year ago for work, but Michael still planned to take the annual summer road trip; this time he would go on his own. He told his mother this would be his last ride; his shoulders were aching from years of riding hunched over a bike. For his final two-week ride, he was going down to the Gulf of Mexico.

He set out that weekend. On Aug. 4, the first day of his trip, just before 6 p.m., he was driving alone on the I-29 in North Dakota near Grafton. His 2009 Yamaha drifted off the road into a ditch and Michael was ejected from the bike. He was pronounced dead at the scene. He was 42.