How does Mike Babcock do it? An excerpt from Sportsnet's long-read on the Toronto Maple Leafs' new coach 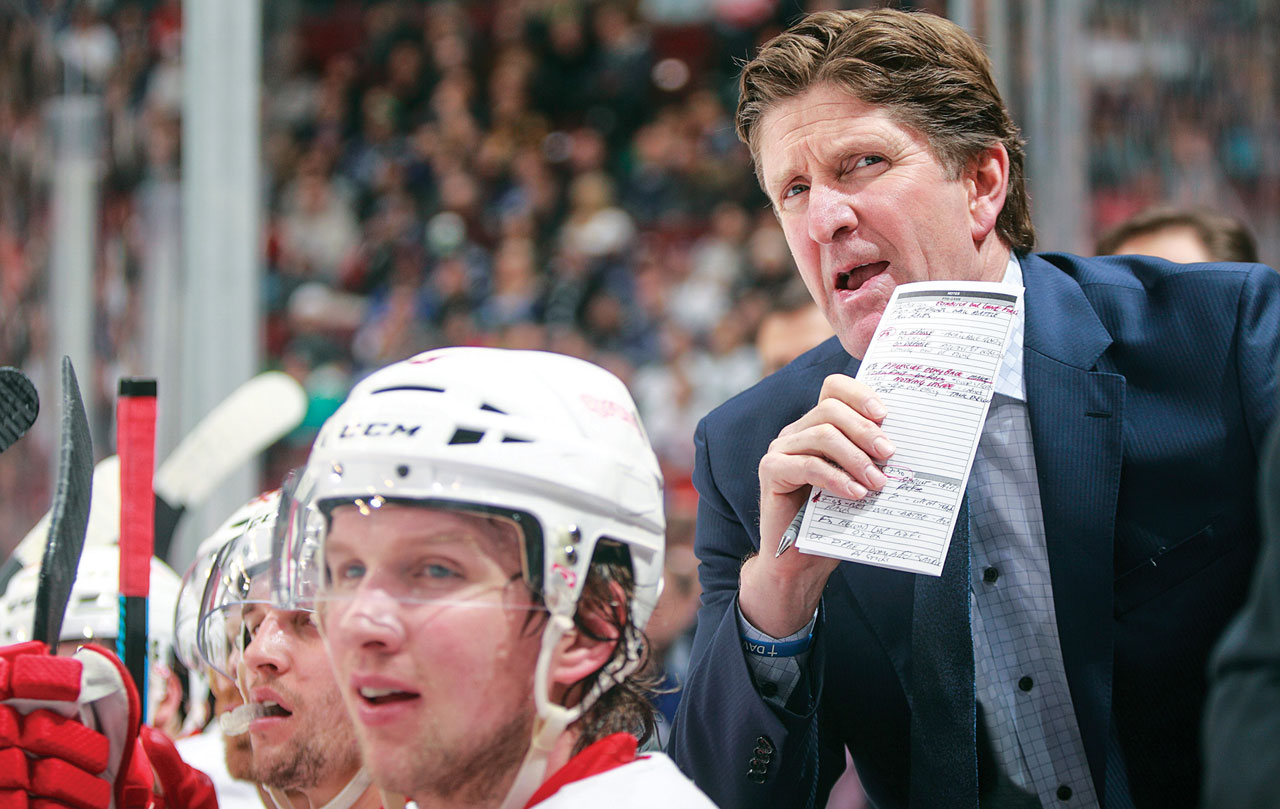 This is an excerpt of a full feature that first ran on Sportsnet.ca. Read the full story here.

Standing in the doorway of his suburban home, Mike Babcock smiles before mentioning that the retriever trying to sneak around him and get outside is named Mac. If you can find your way past Mac, you can step inside Babcock’s grand open foyer. After closing the door, Babcock explains that he and his wife, Maureen, named Mac after a point on Emma Lake, Sask., where the couple’s favourite bar used to stand. The dog is old, 10 or 11 Babcock reckons; her mane already sports more grey than her 51-year-old master’s. Babcock hobbles, looking slightly pained from his morning workout and run, as he walks to his kitchen and sits down next to the granite island where he has placed his laptop. He has an office, lined with hockey memorabilia and the sun-baked skulls of some of the animals he has killed—an African lion, a leopard, some bears and deer—but today he’s working in the kitchen.

Everything in Babcock’s home seems to be in perfect order. Devoid of clutter and dust, the house is lined with family portraits. Though he isn’t wearing his usual fitted suit, cuffed shirt and tie, he is nonetheless put together in a creaseless flannel shirt. His hair—freshly cut and as auburn as ever—is combed beneath his ball cap. As he offers up a glass of water it seems, to the untrained eye, that his cuticles are well-maintained.

Related: What can Mike Babcock really do for the Leafs?

The TV on the counter under the cupboards is playing a favourite show, but it’s muted. Not long ago a guy in camouflage appeared on the screen, trekking through the tall grass stalking a wounded buck. Now there’s a fisherman rocking his bass boat, reeling hard on the line, pulling in his latest catch. But Babcock isn’t watching any of this. Instead he’s focused on the stride and positioning of one of his players: the Red Wing caught in the freeze-frame on his computer screen, stickhandling the puck across centre ice. It’s an off day in the life of hockey’s most revered coach, and he’s told his Wings to take it easy while he re-watches their latest game so he can pick it apart in front of them tomorrow morning.

His team won last night, but that doesn’t matter because the win wasn’t perfect. It wasn’t even pretty. Outshot 13–3 by St. Louis through the first 30 minutes of play, the Wings had no business coming out of Missouri with a win. “There’s always something to work on,” Babcock says.

His attention turns toward the television to see what the angler has just brought into his boat: a largemouth bass with flaring gills. “I love this stuff,” Babcock says. Story goes that Babcock has been fishing and hunting since the age of two, when he sat awestruck on his old man’s shoulders while Mike Babcock Sr. pulled the trigger and downed a moose. The angler releases the bass back into the water and Babcock returns his attention to the writer who’s come from Toronto to sit in his kitchen and pepper him with questions like: “So what’s your favourite part of the day?”

He doesn’t pause before any of his answers, but jumps at every question: “Family time,” he says. “I like family time. And the start of the day, 5:50 a.m. When I head to the arena to work out.”

He looks back at the freeze-frame on his computer, studies it for a second and waits for the next question, which is really just a statement: “I’ve read you’re a fitness buff, an avid outdoorsman and a self-professed ‘lifelong student of the game.’”

He nods and explains in a voice he shares with Rocky Balboa: “I don’t know what it’s like in your business. But in mine: If you’re not getting better, you’re getting passed.”

His players say he uses that line over and over to instill his philosophy on life and the game. I try fishing for something deeper. “So what drives Mike Babcock?”

He readjusts his position on his stool and for a moment it seems he might give the question some thought before he responds. But he already knows exactly what he wants to say: “I’d like to be the best coach in my generation.”