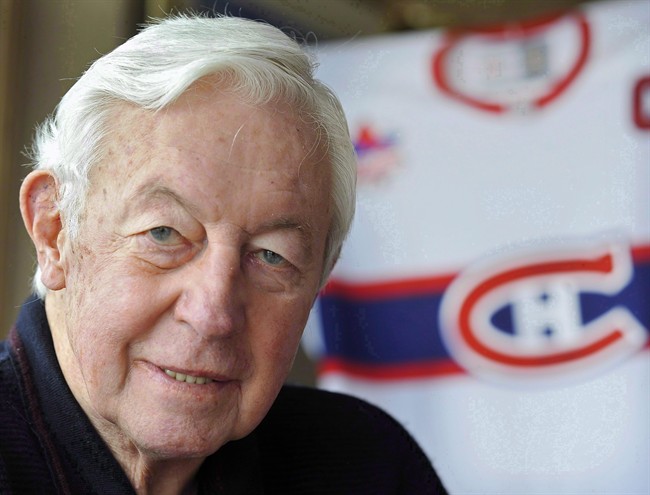 MONTREAL – It is hard to imagine a classier hockey player, on and off the ice, than Jean Béliveau.

A supremely skilled centre for 18 seasons for the Montreal Canadiens, the 83-year-old Béliveau was also a gracious spokesman for the team and the sport.

The NHL club lost the man who embodied all the attributes of their dynasty teams of the 1950s, 1960s and 1970s — talent, flair, intelligence and success.

He scored 507 goals, won 10 Stanley Cups and was captain for 10 seasons before his retirement in 1971, then moved seamlessly into an executive position with the club.

Words like class and gentleman were attached to Béliveau by virtually everyone who met him.

“Like millions of hockey fans who followed the life and the career of Jean Béliveau, the Canadiens today mourn the passing of a man whose contribution to the development of our sport and our society was unmeasurable,” team owner Geoff Molson said in a statement posted on the Canadiens’ website.

“Jean Béliveau was a great leader, a gentleman and arguably the greatest ambassador our game has ever known,” Molson added.

“Meeting him is not like meeting other stars from the old days,” said Béliveau’s former linemate Gilles Tremblay.

Tremblay, who won four Stanley Cups with Béliveau in the 1960s, died on Nov. 26 at the age of 75. Just four days later, former defenceman, coach and executive Pat Quinn died at the at age 71. The failing health of Béliveau’s rival and fellow legend Gordie Howe has only added to a somber mood around the NHL.

Canadiens fans who revered Béliveau were given a scare in 2000 when he was diagnosed with throat cancer, but after losing 30 pounds during treatment and enduring “the worst period of my life,” he recovered and was soon back in his familiar spot — attending nearly every home game with his wife Elise in the seats among the fans. He also survived a stroke in 2012.

Such was his spotless image, Béliveau turned down an offer from prime minister Brian Mulroney in the 1980s to sit in the Senate and refused an offer extended by prime minister Jean Chretien in 1994 to become Canada’s governor general.

Even the crafty handling of his first professional contract in the early 1950s, when he landed a comparatively enormous salary that averaged more than $20,000 as an unproven rookie, didn’t tarnish his public appeal.

A resigned general manager Frank Selke Sr., when asked what it took to sign Béliveau, simply said: “All I did was open up the Forum vault and say: ‘Help yourself, Jean.'”

The signing had been ordered by the Canadiens owners, who had bought the entire Quebec Senior Hockey League to secure the rights to the quiet, six-foot-three centre for the Quebec Aces.

And the esteem in which he was held, inside and outside hockey, was not the result of a cynically nurtured persona. Those closest to him insist the graciousness was genuine.

Until shortly before his death, he would spend time before and after every home game signing autographs and talking to anyone who approached. For those he knew, there was always a smile and a handshake.

It seemed that Béliveau got his business savvy from his father, Arthur Béliveau, an electrician, and his values from growing up in the small Quebec community of Victoriaville, where he was an altar boy at the local church.

Béliveau, the eldest of seven children, was born on Aug. 31, 1931, in Trois-Rivieres, Que., but moved to Victoriaville, a dairy centre southwest of Quebec City, when he was three.

He learned to control the puck on a crowded backyard rink and by the time he was a teenager, the Béliveau legend was growing.

When Victoriaville’s junior team folded, he moved to Quebec City and began filling rinks around the province. When he moved up to the senior Aces, he was said he be earning $20,000 in salary and endorsements on what officially was an amateur team.

It was Arthur Béliveau who insisted his son not sign away his pro rights and maintain the right to negotiate his salary — a rare move in a time when the six NHL teams virtually owned players from boyhood onward.

That forced the Canadiens to hand Béliveau, nicknamed Le Gros Bill, a $110,000, five-year contract, including a large signing bonus, to lure him from Quebec, a city he loved and that adored him in return.

Béliveau had short stints with the Canadiens two consecutive years before joining the club for good for the 1953-54 season.

He carried tremendous pressure into the NHL, both for his amateur scoring feats and his salary, which was only topped by scoring legend Maurice (Rocket) Richard.

His rookie season was spoiled by injuries. Although he rebounded with 37 goals as a sophomore, he was criticized for soft play and failing to retaliate to opponents’ cheap shots.

That all changed in his third season, 1955-56, when Béliveau decided to fight back. He led the team with 143 penalty minutes, led the NHL with 47 goals and 41 assists and took the first of his two Hart Trophies as the league’s most valuable player.

At six foot three and 205 pounds, Béliveau combined strength, a long reach, a soft touch on the puck and remarkable vision on the ice to dominate the league.

In a 2011 interview, Béliveau said he would not have quite the same size advantage in today’s NHL.

”In Chicago, Eddie Litzenberger, maybe Allan Stanley in Toronto. But now you have players who are 6-7, 6-9, 250 pounds. What amazes me is that, in the past, a tall and heavy guy was usually not a great skater but today they skate pretty well. Very good, as a matter of fact.”

Béliveau’s slapshot, with a lazy-looking half wind-up, was deceptively hard.

Don Marshall, a checking forward for the Canadiens in the 1950s and 1960s, said even Béliveau’s teammates were in awe of his skill.

“It was such a pleasure to watch him play and handle the puck,” said Marshall. “He was so graceful on the ice.

“You knew that when your team needed a goal, he’d be on the ice with Richard or (Bert) Olmstead and you knew it could happen.”

Richard retired in 1960 and Harvey was traded the following year. Béliveau took over the captaincy in 1961 on a team rebuilding for another run of Cups under coach Hector (Toe) Blake.

Béliveau won his second Hart Trophy in 1964, when a new Canadiens dynasty arose to take four Cups in a five-year span.

The one that got away was 1967, when Montreal desperately wanted a Cup to celebrate the city’s world’s fair, Expo 67, only to lose in the final to Toronto in what remains the Maple Leafs’ last championship.

“We lost to Toronto in 1967 and I was disappointed because I thought we had the better team,” Béliveau said years later.

After the 1969-70 season, in which an aging Béliveau had only 19 goals, general manager Sam Pollack talked his captain into playing one more season.

Béliveau scored 25 goals — including his milestone 500th — and added 22 points in 20 playoff games as the Canadiens won another Stanley Cup, allowing their big centre to retire, at 40, a winner.

“I always enjoyed the playoffs,” he said. “I enjoyed playing in it. Everybody, not only the players, but management, the fans, maybe the press, everybody is so much more nervous. So I enjoyed every game.”

Where other stars, including Richard, had nasty post-career experiences with token public relations jobs, Béliveau was made the Habs vice-president of corporate affairs, where he worked on marketing and became a bright and knowledgeable sounding board for a succession of team presidents and general managers.

It may not be coincidence that it was after Béliveau stopped going to the office every day in 1993, when he “retired” to become a part-time public relations “ambassador,” that poor decision-making set in and the Canadiens began a slide into mediocrity.

In 2005, Béliveau made headlines when he sold off many of his hockey mementoes. Béliveau said he had mixed emotions about his decision but that the time had come to part with the objects, including his Stanley Cup ring from 1958-59, a replica of the Conn Smythe Trophy he won in 1965, the inaugural year for the playoff MVP award, his Hockey Hall of Fame induction ring and the pucks he used to score his first and last NHL regular-season goals. The auction raised about $1 million.

When the Canadiens opened Centennial Plaza at the Bell Centre as part of the team’s 100th anniversary, their four greatest players were honoured with statues — Richard, Howie Morenz, Guy Lafleur and Béliveau.

Béliveau also ran a charitable foundation and sat on the board of directors of several companies.

He and his wife Elise had one daughter, Helene, and granddaughters Mylene and Magalie.