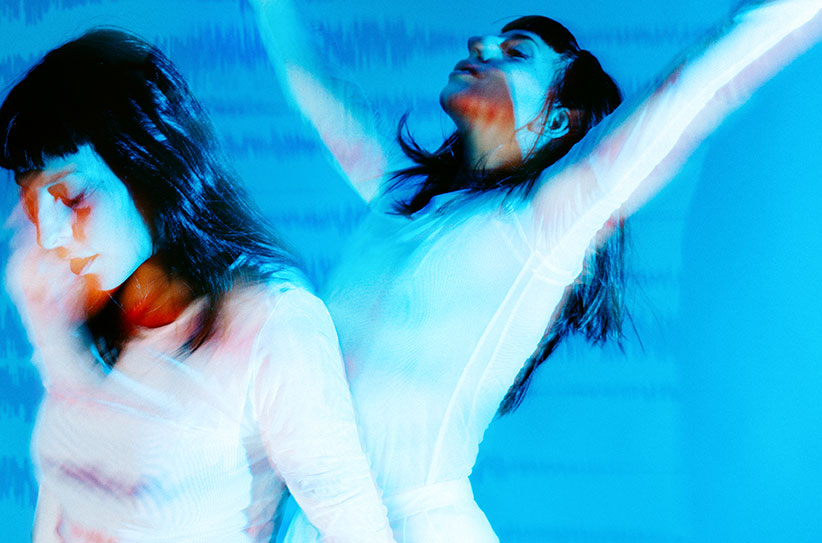 Some would argue that our sixth sense is intuition, but Catalan artist Moon Ribas would disagree. She has a vibrating chip implanted in her left arm. She calls it her “seismic sense.”

The New York-based dancer and choreographer is a cyborg—the short form for “cybernetic organism,” a term scientists first coined in 1960, likely without realizing artists would become cyborgs, and in such creative ways. Ribas, who spoke at the Superhuman Summit in Vancouver last month, and will be at Generator Toronto on Nov. 12, has an online seismograph sensor in her arm that allows her to feel earthquakes in real time, which she incorporates into dance performances. “In art, artists no longer need to use technology as a tool, we can become technology in order to create new senses,” she says. “I see the extension of human senses through technology as an art itself, as cyborg art.”

Ribas grew up in Mataró, Spain, where she had a lukewarm interest in tech—video games were never her thing. After studying dance and choreography in London and Amsterdam, she started experimenting. “As a student, I was encouraged to use technology in my dance pieces,” she said. “But it felt cold, distant and unnatural; I thought technology should be a part of the dancer’s mind, not a part of the piece.”

Her first project was in 2007, when she wore DIY kaleidoscopic glasses for three months, allowing her to see the world through blotches of colour. A year later, she created a speedometer glove, which traced the movements around her, from speed walkers to cars zooming by. She then created a pair of earrings that allowed her earlobes to feel different kinds of vibrations if people were walking behind her. But everything was more or less stuck to pedestrian traffic. “I started wondering if it was possible to feel a universal movement, a movement beyond our natural senses,” she says.

That’s when Ribas started collaborating with technology art professor Jeffrey Scudder, who helped her design a tiny cybernetic implant which senses earthquakes. In 2013, it was grafted into her left elbow. Since her implant is connected to online seismographs, it vibrates whenever there is an earthquake anywhere in the world. She’ll get a weaker or stronger vibration depending on how the quake measures on the Richter scale. “Earthquakes are the heartbeat of our planet,” she said. “So I thought it would be amazing if I could transfer the universal movement of our planet’s earthquakes to my body.”

Having an arm that vibrates unpredictably has got to be inconvenient, whether you’re sleeping, in meetings or sharing intimacy. “At the beginning, I had to get used to the constant vibrations, but after a few weeks, I got used to it,” she said, noting that she sometimes gets vibrations every 10 minutes. “I found my extra sense, the seismic sense.”

One contemporary dance piece she created, Waiting For Earthquakes, had Ribas standing still under a lonely spotlight on a stage until she feels an earthquake vibration. If there are no earthquakes during the time she is onstage, she won’t dance. But if there are, she will jolt around with her arm held high, moving it as if she is painting the sky with her elbow, while at other times, she seems possessed by its every move. “When I feel a vibration, the motion becomes an emotion—I feel like a cyborg,” she said.

And she’s co-founded the Cyborg Foundation, which helps others becomes cyborgs, “defends cyborg rights and promotes cyborgism as an art and social movement . . . The union between humans and technology is inevitable and in most cases, invisible,” says Ribas. “It’s invisible because most people already feel an invisible connection with technology—it’s common to say, ‘I’m running out of battery,’ instead of, ‘My mobile phone is running out of battery.’ ”

The cliché is that cyborgs are freaks who want to become Terminator-style humanoids; Ribas thinks the opposite is true. “I don’t feel closer to machines or robots. I feel closer to nature because I can feel my planet,” she says. “Creating new senses to the human body will allow us to rediscover the planet we live in.”