He loved heavy machinery and worked 30 years in a salt mine, making sure salt ‘spilled in the right places’ 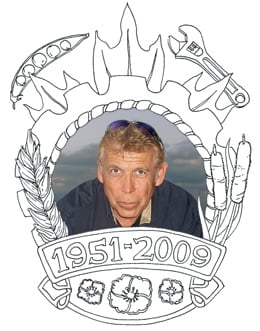 Murray Albert Nesbitt was born on Sept. 5, 1951, in Brussels, Ont., just east of Lake Huron. With two older sisters and a younger brother, he was the third child of Florence and George Nesbitt, who had a farm outside Blyth, not far from Brussels. Both parents sometimes worked off the farm—Florence had a job at a grocery store, while George ran a farm drainage business—so the kids were often left to do the farm work and get supper on the table. Even then, Murray had a love of heavy machinery, helping his father when he could. “Once you get diesel fuel in your veins, you never lose it,” he used to say.

As a teen, Murray didn’t care much for school, and sports weren’t his thing, but he had many friends, and a wicked sense of humour. His sister Brenda Kitching recalls how, when she got married, she felt “disappointed” that Murray disappeared from the reception without saying goodbye. She and her husband left, unaware that her brother, then 18, had hidden in the back seat. “We drove about four miles, and then up pops Murray, having a laugh,” she says.

After high school, Murray took a job at a nearby trailer factory. Out and about in Blyth with a friend, he spotted Connie Nethery, a local farm girl, and strolled over “with the intention of getting an introduction,” she recalls. The two struck up a relationship, going on dates to the drive-in; they were married on April 28, 1972. The bride made her own wedding dress, which had an empire waist. “We had so much to talk about,” Connie says. “We could talk forever.”

The couple had a son, Jeff, in 1972, and a daughter, Cathy, in 1974. Connie initially stayed home with the kids, while Murray did shift work. In addition, “he had a ditching machine and a backhoe, and did work on the side,” says Jeff. “Dad told me I first ran a backhoe when I was two years old.” Murray was a member of the Lions Club, the Masonic Lodge, and the Royal Canadian Legion. A testament to his community involvement, he served as councillor for more than 14 years, first for the village of Blyth and later for the township of North Huron (amalgamated in 2001). “He was a great union man,” Connie says. “He believed in fairness above all.”

Yet Murray “had his demons,” says Jeff, who notes that his father battled alcoholism for much of his life. “He wasn’t home as much as the kids would like,” adds Connie. Cathy Nesbitt-Timmons, their daughter, admits she sometimes missed her father; yet her memories of him are happy ones. “I remember him saying, ‘I’ll take you for a drive and get you a treat,’ ” Cathy says. “He stopped at a farm stand and bought peas in a shell. That was his idea of a treat!”

In 1980, Murray took a job at the Sifto salt mine in nearby Goderich, where he would work for almost 30 years. Murray had many jobs, starting as a scaler (scraping salt off the wall), then blasting with dynamite. “His favourite was central control,” Connie says, which involved “making sure the salt spilled in the right places.”
Yet mining could be dangerous: in 1981, “there were two fatalities in a two-week period, both of them on our shift,” says Allen Robb, now the union health and safety rep at the mine, who trained Murray. “It was hard to accept.” In 1996, Murray’s partner was buried in a salt pile. Murray dug him out with his bare hands; the man survived. The mining industry as a whole has gotten much safer since then, Robb says: in the early ’80s, about 20 miners across Ontario would die each year, he notes. Now, it’s closer to two. “If we can go from 20 to two, we should be able to get that to zero,” Robb says. “Murray and I would talk about that.”

In July, Connie retired from her job (she’d worked at Farm Credit Canada since 1980). That same month, Murray celebrated his five-year anniversary with Alcoholics Anonymous. A doting grandfather to five young kids, he “desperately wanted to make up for lost time,” says Cathy. He and Connie had purchased a trailer and were making trips to Arizona. At work, Murray had earned enough seniority to work above ground. Jeff took a job at the Sifto mine, too, and would drive to work with his father. Murray didn’t plan to retire till he turned 65.

On Aug. 25, a year to the day after Jeff began working at the mine, Murray was inside a storage dome, knocking down salt piles with an excavator. The excavator began to leak oil; Murray set about clearing salt away from the machine so mechanics could get in to fix it. “He must have been too close to the chute,” Robb says. “They’re covered with salt, so maybe he wouldn’t realize.” Although the incident is still under investigation, Murray somehow fell into a chute and was buried in salt. He was 57 years old.