Coltrane wanted him, but he was too humble. ‘I feel like a crook,’ he’d say when he got paid at a club. 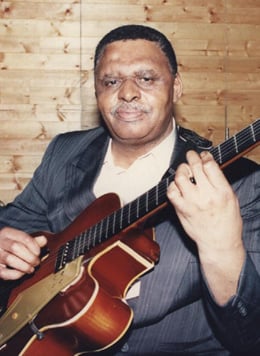 Nelson Fredericks Symonds was born on Sept. 24, 1933, in Upper Hammonds Plains, N.S., a rural black community cut off from nearby Halifax by badly rutted roads and racism. His father, Aubrey Whiley, and mother, a beautiful woman named Eleanor from the musical Symonds family, never married and soon separated. Nelson lived with Aubrey, a stubborn, disciplined man who ran the family sawmill. Aubrey later married and had eight more children. Nelson and his half-siblings all worked on the small family farm and at the mill, fashioning fish boxes and pickling barrels. He also stayed close with the Symonds, who fostered his early interest in music. He took banjo lessons from one Symonds uncle; within a week Nelson was more skilled than he.

Nelson soon graduated to the guitar, receiving a metal-bodied instrument from his father. Self-taught, he played gigs at local dances. At 17, he disobeyed his father—they would not speak for years—and left with another uncle, the saxophonist John Symonds, for Sudbury, Ont., to perform weekend gigs. Soon, they were touring with a carnival jazz band across Canada and the American South. Montreal band leader Vic Vogel recalls meeting Nelson in those days at a rural Quebec fair backing up hootchy-kootchy dancers with snakes around their hips. By 1958, Nelson was tired of the road. Settling in Montreal, he made a name for himself as the city’s premier jazz guitarist in joints like Rockhead’s Paradise. He practised relentlessly, six hours a day. “I gotta be on that box,” he told trumpet player Kevin Dean. Nothing else mattered: he lived in small apartments with rented furniture, his only other passion watching sports and soap operas on a black and white TV. Even when Nelson met Marie-Marthe Germain, a showgirl who more often went by Venus, her stage name, his custom-ordered Gretsch Sal Salvador guitar came first. Fearing the relationship was putting a dent in his guitar prowess, he left her. Instead, he played, smoked steadily and, with his pal, the Montreal bassist Charlie Biddle, drank alcool.

By the early 1960s, his reputation had grown. One night, playing in Milwaukee, a blind man arrived with a golf bag of saxophones and flutes. It was Rahsaan Roland Kirk, a gifted musician who could play several instruments at once. After a few nights, says Montreal jazz guitarist Greg Clayton, Kirk “was trying to nail Nelson,” deliberately playing standards he didn’t know and throwing him the first solo. Intent on revenge, Nelson hit upon a Cole Porter tune—In the Still of the Night—he felt sure Kirk would call, studying it inside and out. Nelson lied when asked if he knew it, then delivered a fiery solo. “You were waiting in the bushes,” Kirk told him, an expression Nelson gleefully adopted. Later, he took an offer to tour with American organist Brother Jack McDuff, but ran into immigration troubles in Buffalo, N.Y.; replacing him was soon-to-be-famous guitarist George Benson.

Though he had many offers—legend says both B.B. King and jazz icon John Coltrane wanted him—he never returned to the U.S. Shy, self-effacing, he balked too at recording. “I’m not ready,”he’d say. “When are you going to be ready—when you’re six feet under?” one bandmate, Montreal bassist David Gelfand, recalls asking. “Nelson was humble to his own detriment,” says Clayton. “When he got paid at a club, he would say, ‘I feel like a crook.’ ” On the only occasion he entered a recording studio, he froze, unable to launch into the harsh, syncopated attack for which he was known. He made a meagre living through the 1970s and ’80s playing clubs. “I gotta get more gigs,” he’d say. One day, walking through the city, Nelson ran into Venus, the woman he’d left years before. She moved into his downtown quarters, nursing him through quadruple bypass surgery. Afraid that returning to the clubs would tempt him to drink and smoke, and frightened he couldn’t play with his usual intensity, he retired. Though he missed the music, “for the first time in his life, he was really comfortable not stressing out about his gigs,” says sax player Dave Turner.

Venus and Nelson made plans to move home to Nova Scotia. But five years ago, she died. Last spring, her daughter, Gabrielle Thomas, decided Nelson should be put in a home. Musicians visited, though his mind grew vague; when Gelfand, the bassist, played a recording of a live gig featuring Nelson, he drifted into sleep smiling. He died on Oct. 11, likely due to complications after surgery to insert a feeding tube. “Well, Nelly, now you’re ready,” says Vic Vogel. “Now you’re playing with Duke Ellington and Dizzy Gillespie and all the rest.”