While some take cracks at the tennis icon's appearance, others, like author J.K. Rowling come to her defence—as Williams lets her racquet do the talking 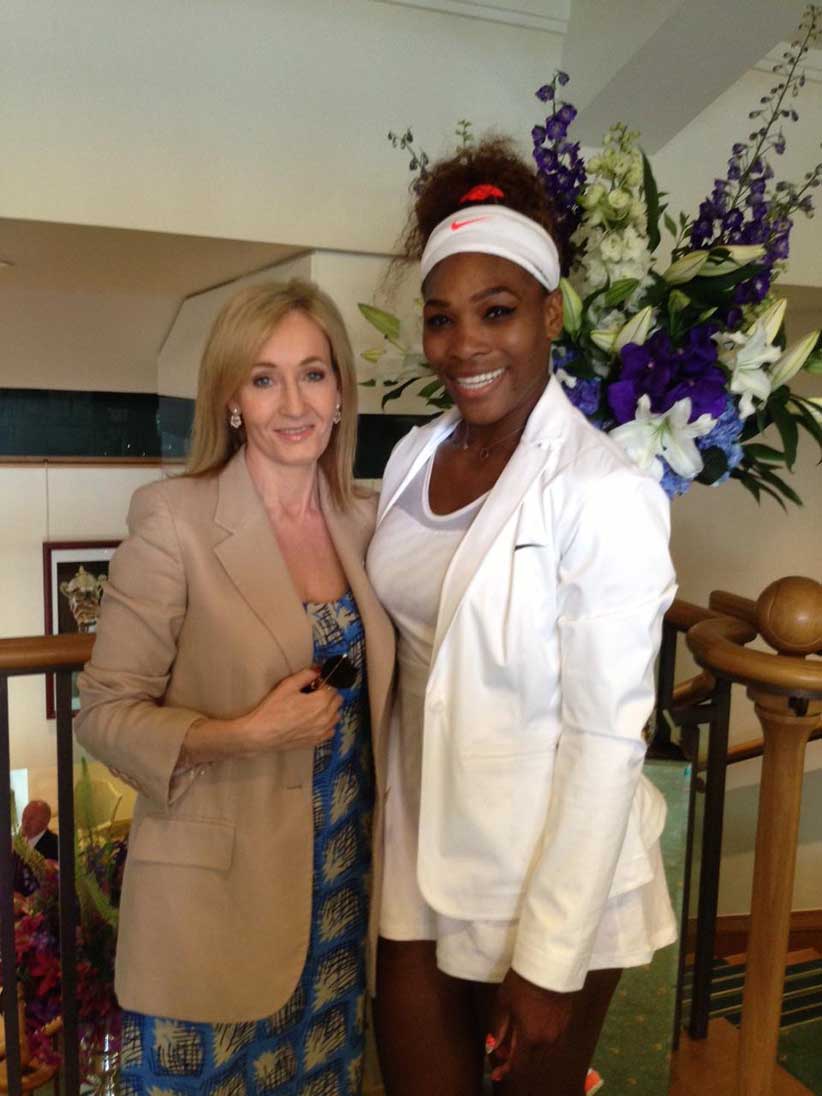 That J.K. Rowling is a fan of Serena Williams is well-documented on Twitter: Just before the tennis legend won her sixth Wimbledon title on July 11, Rowling posted a photo of herself with Williams and gushed: “I’m #TeamSerena today, because you don’t meet many super-talented people nicer than she is. Go @serenawilliams!” Rowling’s post-match tweet was equally effusive: “#SerenaSlam! I love her. What an athlete, what a role model, what a woman!”

Rowling is a legend herself, of course, having written the Harry Potter books; she takes words seriously. But she could not have imagined the sexist comments that celebratory tweet provoked. One moronic wisecrack attributed Williams’s success to “being built like a man.” Rowling immediately served critics a stunning return, posting two photos of Williams in a tight, revealing red dress and studded stilettos. As if the pictures didn’t say it all, Rowling added: “Yeah, my husband looks just like this in a dress. You’re an idiot.”

This isn’t the first time that Williams’s athleticism has been undercut by body-shaming. Last year, Williams, 33, and her sister, Venus, also a tennis superstar, were called “the Williams brothers” by a Russian coach. And the chauvinistic comments aren’t relegated to Neanderthals on the outskirts of reality. Just one day before the Rowling Twitter showdown, the New York Times ran a piece entitled, “Tennis’s top women balance body image with ambition.” As if one should have anything to do with the other.

The article discussed how Williams’s “rivals could try to emulate her physique, but most of them choose not to.” After all, as the coach of Polish player Agnieszka Radwańska put it, “It’s our decision to keep her as the smallest player in the Top 10. Because, first of all, she’s a woman, and she wants to be a woman.” The subtext: The bigger the player, the more man-like, the less surprising her triumphs.

The whole discussion about Williams’s femininity and worthiness of praise only got weirder at the Wimbledon Champions Ball. The 21-time Grand Slam winner wore another dazzling dress, prompting USA Today to liken her to a Disney princess. At an event applauding Williams for her physical prowess on the court, her physical appearance off the court became the focus. Even compliments wind up as insults.

It would have been better to recall why Williams was wearing that dress. As tennis legend John McEnroe told ESPN, Williams “could . . . be the greatest athlete of the last 100 years.” Just look at her trophies.