There was a playoff run, at last, for the Toronto Blue Jays' faithful. And it all started with the acquisition of an eventual MVP. 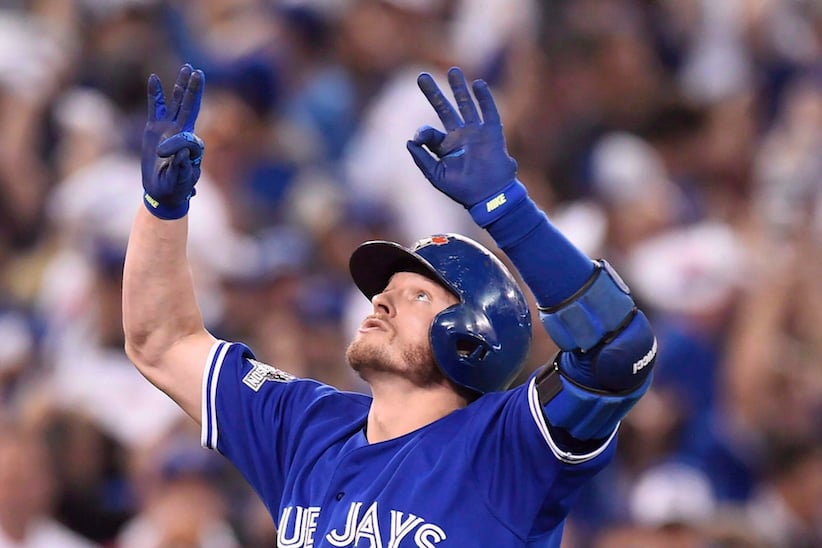 The “M-V-P” chants started in late May, when the Blue Jays were still a sub .500 ball club. It was the night that Josh Donaldson went four-for-four, scored five runs, and handed Toronto a 10-9 walk-off victory over the Chicago White Sox with a three-run shot to right field in the bottom of the ninth. It was his second homer of the game.

Initially, fans weren’t sure what to make of their new third baseman. Brett Lawrie, who went to Oakland in the trade that brought Donaldson to Toronto, had been a favourite for his defence, his vein-popping intensity and his B.C. birth certificate. But it took just a few weeks for Blue Jays faithful to fall in love.

Playing the hot corner, Donaldson made jaws drop with his diving stabs, high leaps, bare-handed grabs and rocket arm. Then there were the scarily gung-ho moments, such as the night he dove into the second row in Tampa to snag a foul ball, and helped along Marco Estrada’s bid for a perfect game. (He wasn’t hurt, and neither, thankfully, was the kid he landed on.)

At the plate, the 29-year-old was even better. He hit 10 homers in May, knocked in 24 runs in July, and scored 29 times in August. And his opportunism on the base paths won both hearts and minds. Who else tags up and heads for home on a shallow pop-up to the second baseman? Donaldson’s Superman slide to avoid the outstretched arm of Cleveland catcher Yan Gomes is now permanently etched in millions of memory banks.

In June, Don Cherry went on Coach’s Corner and somehow made getting a starting spot in the all-star game for the Florida native a matter of Canadian pride. The 14,090,188 online votes Donaldson received set a new major-league record. Even American fans and media had to start paying attention to a guy plying his trade in Toronto.

By late summer, those MVP shouts from the bleachers had gone from sounding like encouraging wishes to prescient predictions. Jays fans chanted the three letters every time he stepped to the plate at home, and often on the road, rubbing it in in Baltimore, Seattle and Anaheim. Donaldson kept things going through September, as Toronto closed in on its first playoff appearance in 22 years. There was another walk-off blast to cap the regular-season Rogers Centre finale against Tampa, a 5-4 comeback win before a delirious sellout crowd.

Donaldson finished the year with 41 home runs, 27 of which either tied the game or gave the Jays the lead. His 123 RBIs led the American League. So did his 122 runs scored. He added three more homers and eight RBIs over Toronto’s 11 games in the post-season.

After it all ended, with a heartbreaking Game 6 ALCS loss to Kansas City, the eventual World Series champs, there were the accolades. A Hank Aaron Award as the American League’s top offensive player, and Silver Slugger as its best-hitting third baseman. On Nov. 19, the Baseball Writers Association of America made Donaldson the second Blue Jay to win the AL Most Valuable Player award. (George Bell took it back in 1987.)

Related: A thank-you note to the Blue Jays