Language is ever-evolving, and 2015 was no different. Here are some translations of the newest terms to storm the word stage 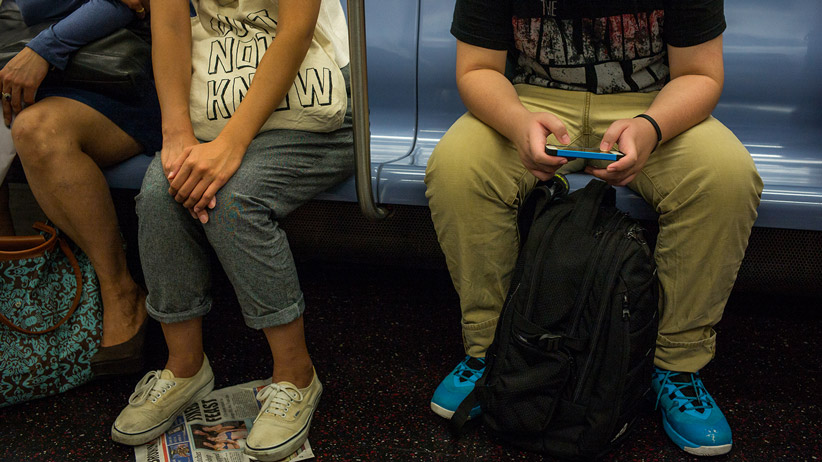 A young man plays a video game September 4, 2014 while riding the subway in the Manhattan borough of New York. (Robert Nickelsberg/Getty Images)

Breaking up is never easy, but it can be simplified. Instead of having a conversation, cut off the person in question. Don’t answer his calls. Ignore emails. Never acknowledge a text. The “ghostee” will get the hint.

The practice of a guy on the bus taking up two seats with his legs spread wide, to the ire of public transit riders everywhere. The new, even more annoying transit faux pas: Pole-hogging.

With three words in an election debate, Stephen Harper sparked a furor. Harper later clarified he meant “Canadians who have been the descendants of immigrants for one or more generations.” Critics called the term offensive. Most people, however, were simply confused by it.

When Chicago teen Kayla Newman described her perfectly groomed eyebrows as “on fleek” in a six-second Vine video, the words just came to her. The rest is history. Ariana Grande started singing about eyebrows on fleek while the restaurant IHOP tweeted out “Pancakes on fleek.”

Rachel Dolezal was born white, but identifies as “transracial,” she said after she resigned as head of an NAACP chapter after it emerged she wasn’t black. Her explanation irked many, and it didn’t help that she’d once sued a historically black university for discriminating against her—because she was white.

Back in the day, a date might end with an invitation to “come up for a cup of coffee.” Except coffee didn’t really mean coffee, did it? “Netflix and chill” is the new “coffee.” (Having Netflix on is optional.)

For a few weeks, the live-broadcast app seemed poised to take over the world. Musicians periscoped new songs for fans and journalists periscoped protests. Now it’s back to live feeds of people’s cats.