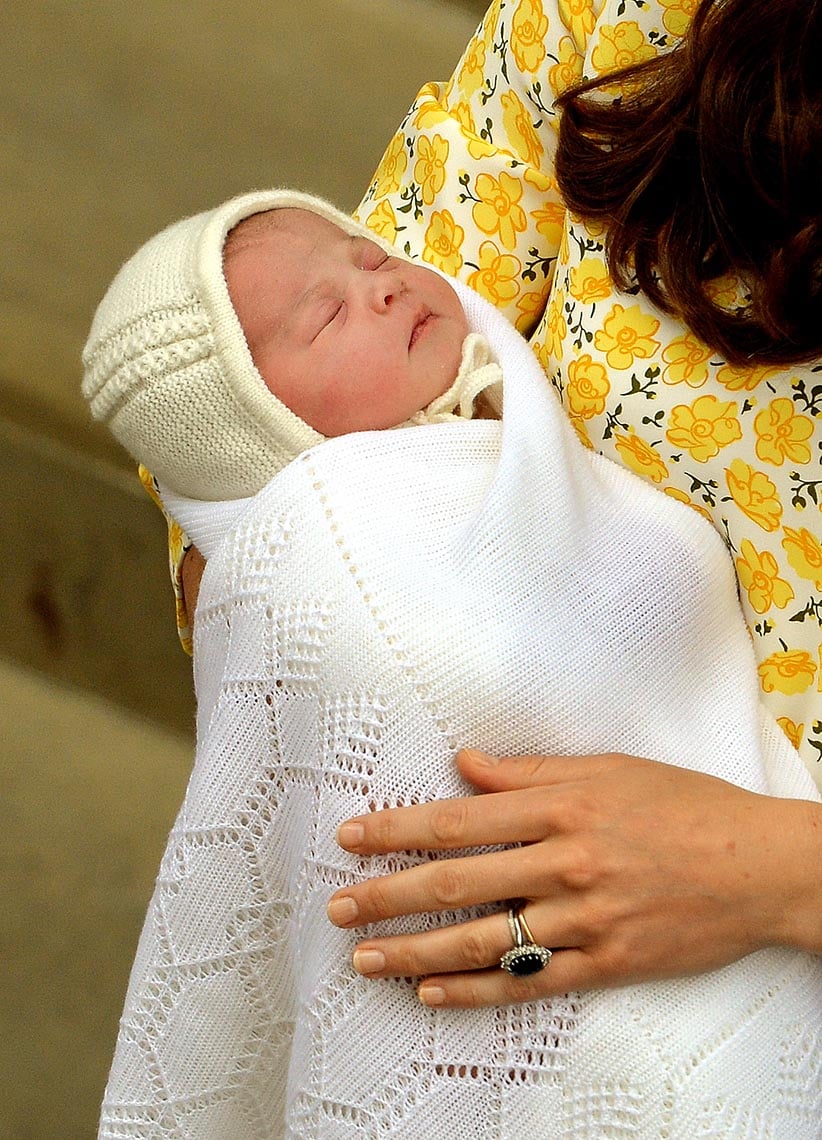 She was born at 8:34 a.m. on Saturday, May 2, at St. Mary’s Hospital London. Less than 10 hours later, her parents, Prince William and Kate, duchess of Cambridge, wrapped her carefully in a shawl, covered her head with a woollen bonnet as protection against a cold wind, and left the hospital. As hundreds of cameras madly snapped away, Charlotte slept quietly in her mother’s arm. Then they took her home to their apartment in Kensington Palace.

Her first day was such a blur of events that family—the Middletons as well as Prince Charles and his wife, Camilla—skipped visiting the hospital, and instead came to see her the next day at Kensington Palace.

Even Prince Harry, currently in Australia on military assignment, got a peek at his new niece.

Prince Harry has said about his new niece: “She is absolutely beautiful. I can’t wait to meet her.” pic.twitter.com/HiNR8lzThy

And then, today, came the announcement of her name.

The Duke and Duchess of Cambridge are delighted to announce that they have named their daughter Charlotte Elizabeth Diana. — Kensington Palace (@KensingtonRoyal) May 4, 2015

Officially, she is HRH Princess Charlotte Elizabeth Diana of Cambridge. All three names were top options on betting sites such as William Hill. It’s no wonder. Each has royal pedigree, all belong to famous princesses and queens, and all have the gravitas needed when a first name is prefixed by “HRH Princess” and suffixed by “of Cambridge.”

Charlotte: The last famous Charlotte was HRH Princess Charlotte of Wales, the daughter of the Prince Regent (the future George IV) and his wife, Caroline. The only legitimate granddaughter of George III and his wife, Queen Charlotte, was beloved in Britain, and destined to be queen in her own right. After falling in love with Prince Leopold of Saxe-Coburg-Saalfeld, they wed on May 2, 1816 (exactly 199 years before the current nameholder was born). Alas, she died in childbirth, along with her stillborn son, in 1817. The nation was plunged into mourning.

In addition to Princess Charlotte and her grandmother, it is also the middle name of Aunt Pippa Middleton.

Elizabeth: The first name of the present Queen, and her mother, the late Queen Elizabeth the Queen Mother, was all but certain to be part of the baby’s name. Prince William is increasingly close to his grandmother, and his country home of Anmer Hall is on her Sandringham estate. That’s where she is expected to be introduced to her newest great-grandchild (No. 5 for anyone counting). As well, the middle names of both Kate and her mother, Carole, are, of course, Elizabeth.

Diana: This was also a safe bet. William has spoken often of keeping the memory of his mother alive. While Diana was a populist choice for the baby’s first name, it would also bring with it a lifetime of comparisons to the late Diana, princess of Wales. Using it as a secondary name is a perfect compromise.