Renaming the Lady Byng after Jean Béliveau would miss the point

The ghoulish demands to rename NHL trophies after expired hockey greats is out of control, writes Colby Cosh 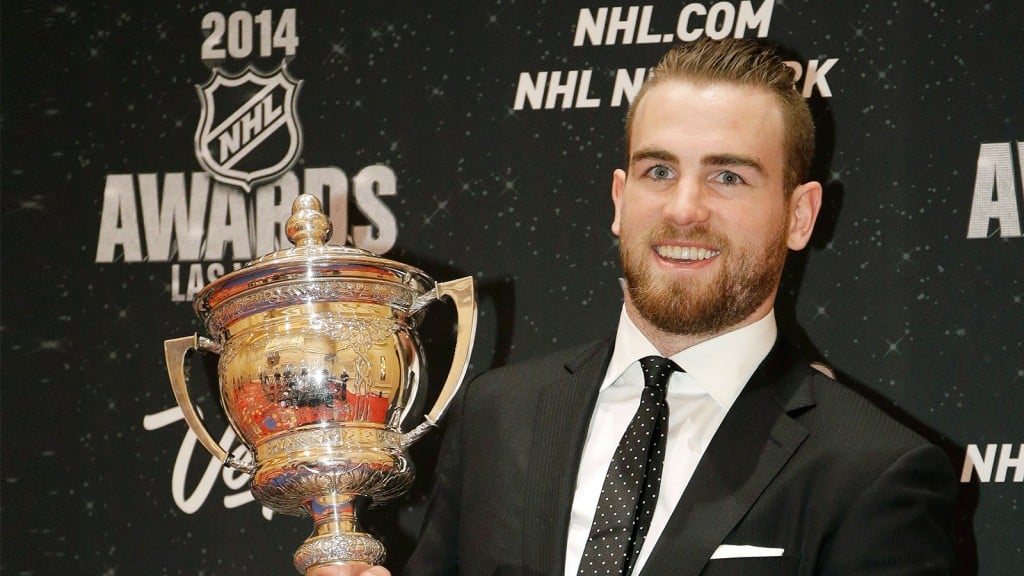 So the other day Eric Duhatschek takes to the Globe and Mail to suggest renaming the NHL’s Lady Byng Memorial Trophy after the late Jean Béliveau. “The Byng has always suffered from a bit of an identity crisis,” Duhatschek writes: it’s an award for “gentlemanly conduct” that usually just goes to a good player whose has accrued very few penalty minutes. Béliveau never won the trophy himself, Duhatschek admits, but “you can be sure” young players like the Flames’ Johnny Gaudreau, a current candidate for the Byng, would appreciate the trophy more if it were named after “Le Gros Bill.”

I don’t want to pick on Duhatschek particularly: he’s one of the more intelligent, sensible sportswriters out there, and he’s not even the first to make this exact suggestion. But these ghoulish demands to rename NHL trophies after freshly expired hockey greats have officially stumbled out of control, with some help from the Internet echo chamber. And editors apparently cannot put a stop to all this grave robbery. 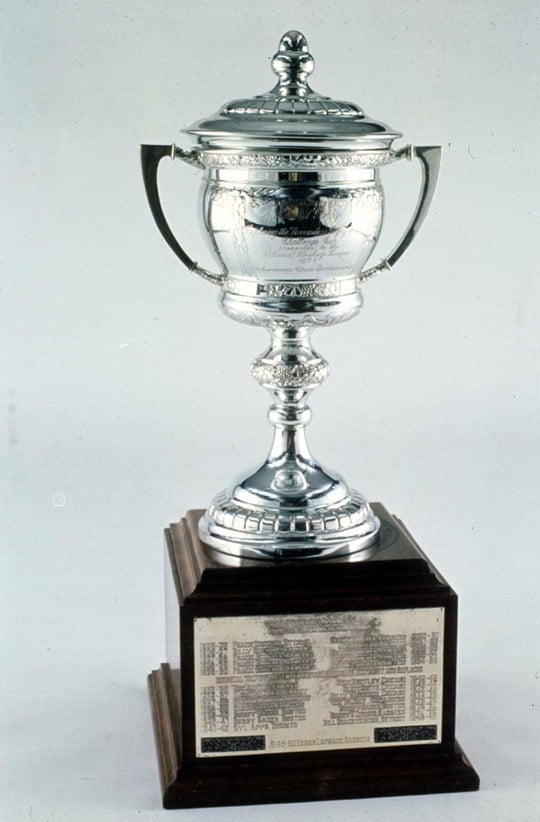 Lady Byng, wife of a governor general, loved hockey and loved Canada. The original trophy was her gift to the NHL. She chose the ﬁrst winner. When she died it became the Lady Byng Memorial Trophy. Perhaps only her name survives her into this century, but it is a name every hockey fan knows. It is the essence of memorials, and stop me if this is obvious, that they outlast personal recollections of the people to whom they are dedicated. If they do not, we cannot successfully commemorate anyone. If we throw out Lady Byng, why shouldn’t future sportswriters now in their cribs throw out Jean Béliveau, once the actual memory of him has died?

Which raises an awkward point: I’m past the median age in this country and I don’t have any mental image of Jean Béliveau as a player beyond “big centre.” Personally, I can just about remember Bobby Orr. (As a cripple. Playing for the Hawks.) But there’s plenty of jaw-dropping footage of Orr in his prime; this is not true of Béliveau, and Béliveau’s game has not invited the kind of specific, vivid description that Maurice Richard or Eddie Shore attracted.

Mostly, in the 20 years or so preceding his death, people talked about how regal and mesmerizingly digniﬁed Béliveau was in person, as a retiree. Yet Duhatschek insists that Johnny Gaudreau, a 21-year-old from New Jersey, would be extra super keen to win a Béliveau trophy just because it was called that.

I imagine Lady Byng was as impressive in her way as Jean Béliveau, and if her trophy suffers from “an identity crisis,” whose fault is that? Duhatschek’s not wrong about this: the Lady Byng really has become a “fewest penalty minutes” award, an afterthought scratched off the ballot in haste by heedless, poorly informed, impatient voters. Those voters are, of course, the members of the Professional Hockey Writers Association, whose vice-president last season was an E. Duhatschek. 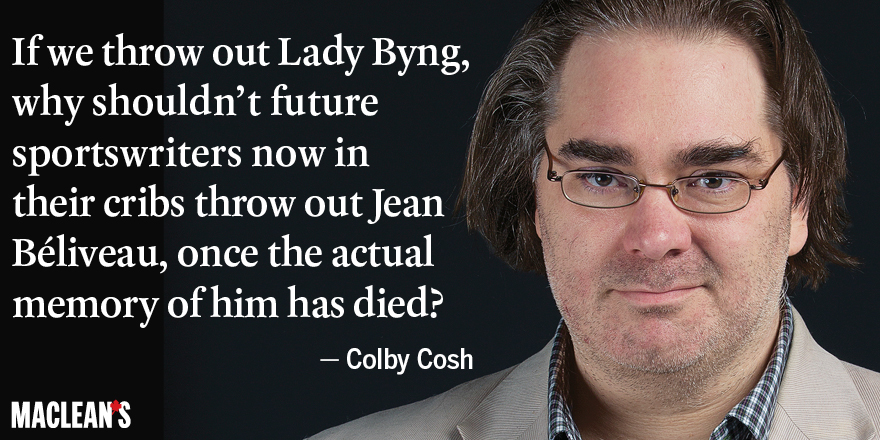 The PHWA is an acknowledged farce that deﬁes reform, but apparently that is not the problem here. Nor is the problem that a group of people were given custody of a piece of heritage and let weeds grow over it. The problem is trophies named after ladies.

I am not suggesting Béliveau is not worth honouring. We know he is, because the Quebec major junior league already has a Jean Béliveau Trophy for its top scorer. And the Montreal Canadiens give an annual Jean Béliveau Trophy for philanthropy. And, actually, Hockey Canada used to give out a Jean Béliveau Trophy for some reason or other, so a few people have one of those in their garage. Nobody, I suppose, thinks this is a hint that maybe we should think of some novel, distinctive way of commemorating Jean Béliveau. That, like defining “gentlemanly conduct” in the 21st century rather than glancing at a table of penalty minutes, would take concerted intellectual effort.

Sportswriters ought to recognize that hockey’s fussy silverware from British Empire times is essential to the sport’s identity. No one has any trouble understanding this when it comes to Lord Stanley’s Cup. And everyone is equally aware that other sports haven’t been able to fake the charm of the NHL’s antique trophies. There are surely more children who know what the Lady Byng Memorial Trophy looks like than there are ones who could locate the Cy Young Award in a rummage sale. This is a good thing, a precious marketing advantage. Let shame cover those who clamour for its surrender.