Anne Kingston: Led by a Trumpian example, accepting responsibility for bad or even illegal behaviour has become passé 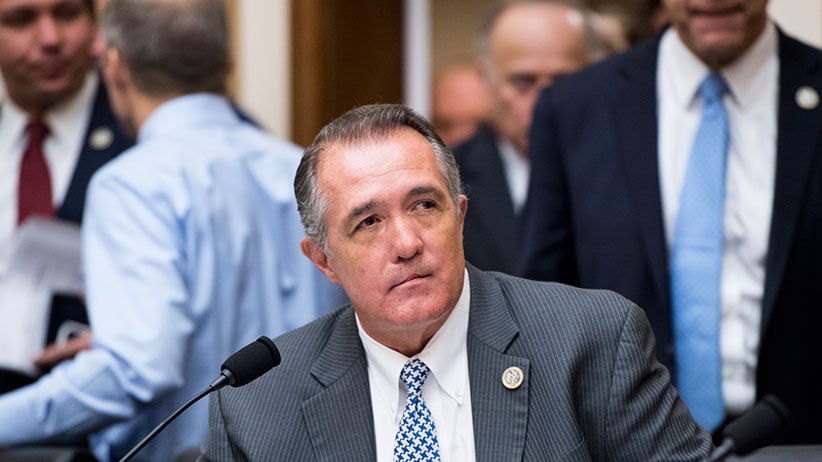 Rep. Trent Franks, R-Ariz., takes his seat as he arrives for the House Judiciary Committee hearing on oversight of the Federal Bureau of Investigation on Thursday, Dec. 7, 2017. (Bill Clark/CQ Roll Call/Getty Images)

On the night of Dec. 7, the enigma of what would make a Republican politician in the Trump administration step down for sexual “impropriety” was finally solved: when that legislator blatantly exposes the GOP’s The Handmaid’s Tale agenda. So we saw when Congressman Trent Franks announced he’d be resigning after the Office of Congressional Ethics launched an investigation to look into claims from two former staffers that he’d hit them up for uterus space, or, to put it more discreetly, “to be a surrogate to bear his child.” One woman reports Franks offered her $5 million.

No one should see Franks’s departure as some some sort of cathartic GOP quid pro quo following Al Franken falling on the swords of 33 Democrats hours earlier. Franks’s statement to the press was low on contrition. He didn’t refer to “the right thing to do,” as Franken did. Instead, he painted himself as a martyr and the victim of the piece: he criticized “the current climate” in which “noble” men are subject to “hyperbolized public excoriation.” The female staffers he’d made uncomfortable by treating as reproductive machines were referred to as “two previous female subordinates.” It could be worse: he could have called them “two previous female vessels.”

In his ouster, Franks reminded us that there’s no “reckoning” within American national politics of the sort seen post-Weinstein with powerful men fired left and right. If anything, a “coarsening” is going on in which accepting responsibility for bad or even illegal behaviour and stepping down is passé. It’s been trumped by the Trumpian example: deny, deny, deny—even in the face of video evidence—and keep (or even obtain) your job. As a result, the nation’s highest legislative chambers are morphing into an unapologetic rogue’s gallery of figures so grotesque, caricaturists aren’t required.

READ: What we know—and have always known—about this moment in sexual harassment

The past week set the tone. On Tuesday, 88-year-old Congressman John Conyers, a Democrat accused of harassment by former female staffers dating back decades, resigned some 50 years too late. The same day, in a magnanimous Daddy Warbucks gesture, Republican Congressman Blake Farenthold announced he’d pay back $84,000 of taxpayer money used to to settle a sexual-harassment lawsuit filed by a former staffer. Farenthold, who was exonerated by the Office of Congressional Ethics, has no plans to resign. Even Franken’s emotional resignation statement on Thursday sent mixed messages absent of catharsis. His first apology after the first woman came forward 19 days earlier to report he’d touched her without her consent (with photographic evidence) was a master class: “There are some women, and one is too many, who feel that I have done something disrespectful that’s hurt them, and for that I am tremendously sorry,” he said. Yet on Thursday, Franken denied his request to have his case heard before the ethics committee, focused on himself; he said some reports made by eight women claiming that he touched and kissed them without consent were “simply not true” and others he remembers “very differently.”

Theoretically, Franken’s departure signals important optics—that the women were heard and believed, that behaviour disrespectful or demeaning of women will not be tolerated, that sexual assault doesn’t have to mean rape; it’s any non-consensual contact. Clearly the Dems are betting that taking the moral high road will provide political leverage in the 2018 midterms—especially if doing so doesn’t shame the Republicans into following suit. Yet it also exposes a raging double standard. The same Democrats who called for Franken to step down can’t marshal similar outrage to demand a Senate hearing into the U.S. president, accused of sexual assault, including rape, by more than 16 women dating back decades.

Taking the high road has exposed a gutter on the other side of the aisle that we’re seeing with Trump’s apparent new strategy to lard the nation’s highest offices with figures as odious as he. Shortly after Franken stepped down came news  that the president is encouraging Paul LePage, governor of Maine and infamous boor, to run for the U.S. Senate. LePage is the nation’s seventh-least popular governor, with an approval rating at 42 per cent, which is higher than Trump’s. He’s a virulent racist, has threatened a Democratic lawmaker in a profanity filled voicemail, and brags about making up stories to fool the press. In other words, a Trump soulmate.

A mere 12 months ago, it would have been unthinkable for a U.S. president to endorse such a man. Now LePage will fit right in next to another Trump-endorsed Senate candidate: the risible Roy Moore, the Alabama judge who has waxed sentimental about the good ol’ days of slavery, and who has been accused of sexually preying on and assaulting  girls as young as 14 (the age of consent in Alabama is 16). In relative contrast, the president looks good: he’s been faced with only one lawsuit   charging him with the rape a 13-year-old (the suit it was withdrawn weeks before the 2016 election).

READ: Bill Cosby’s retrial will be very different in a post-Weinstein world

So coarsened has this landscape become that a new charge of sexual assault against U.S Supreme Court Associate Justice Clarence Thomas, in October, barely made a ripple. We have Thomas to thank for introducing “sexual harassment” into common parlance during his 1991 confirmation in which Anita Hill accused Thomas, her former boss, of sexually harassing her with pornographic suggestions, including announcing he’d found a pubic hair on a Coke can. She wasn’t believed; Thomas took the bench. Now a female lawyer has come forward to say that in 1999, eight years after that hearing, Thomas assaulted her when she was a 23-year-old student. The response? Crickets.

Meanwhile, media is enabling this coarsening, with attention currently fixed on a new book co-authored by Trump’s former campaign manager Corey Lewandowski, who, it should come as no surprise, has a long history of lewd and aggressive behaviour, including sexually harassing female reporters and being charged with battery of a female reporter, caught on video (the state decided not to prosecute). The reckoning hasn’t touched Lewandowski. He hasn’t been boycotted. Nor is he being interrogated about his past as he makes his TV rounds, acting unhinged, sharing gossip about Trump’s profane temper tantrums and his gross fast-food diet, and helping to usher in the new coarsened normal.