A magical meal in paradise—served by Canadians

The Noma Mexico pop-up, a transporting food experience in the Yucatan jungle, has a Canadian connection 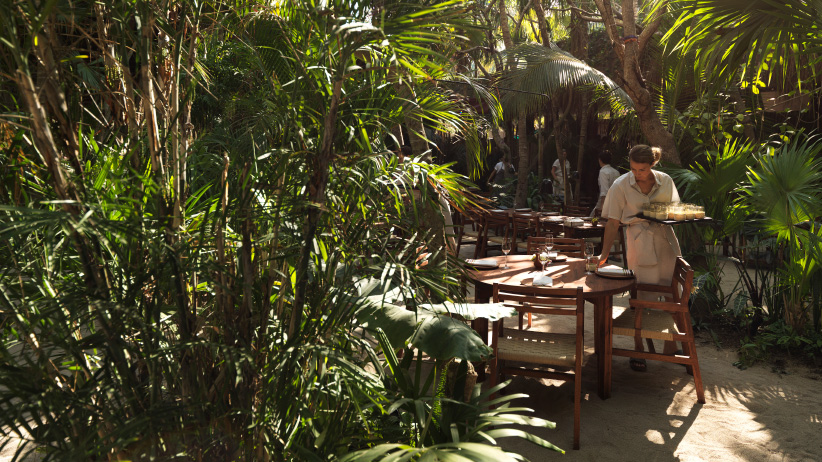 Some chefs like to make a statement of their efforts, and decorate their creations with loud evidence of different techniques. Others prefer to discreetly sweep such markers of their labours under the rug, and do their talking instead with flavour and results. But even in that latter camp, where I prefer to eat, I had never witnessed anything quite so extreme as this.

A single bronzed tentacle of octopus, loosely curled, sat in a small pool of pale, greenish yellow sauce, viscous and smooth—and that was it. No bright colours, no garnish, not even a visible drizzle of oil or flake of salt.

But cut a small slice with your hand-crafted knife, spear it on your wooden fork, and taste perfection: firm and tender in the exact right balance, the ideal seasoning, and the captivating complement of a sauce made from pumpkin seeds that tasted not just of that, but also of the nuttiness of peanuts and sesame, and the rich, sweet complexity of miso.

“Well of course,” the waiter said. “We toast the seeds, so they taste nutty, then we make koji—so it is miso.”

The waiter would know. Because at Noma Mexico, a transporting and magical pop-up restaurant set beneath the open sky in the Yucatán jungle, in Tulum, Quintana Roo, a good half of the unfailingly fetching young waiters delivering plates to the table are also chefs in the local, temporary, open-air kitchen (even Noma co-founder René Redzepi himself eventually delivered a course). And this one—David Zilber, a Montreal-reared sometime Torontonian whom I last met in Vancouver in the kitchen at Hawksworth—had since risen to become a Noma sous-chef, and director of fermentation. 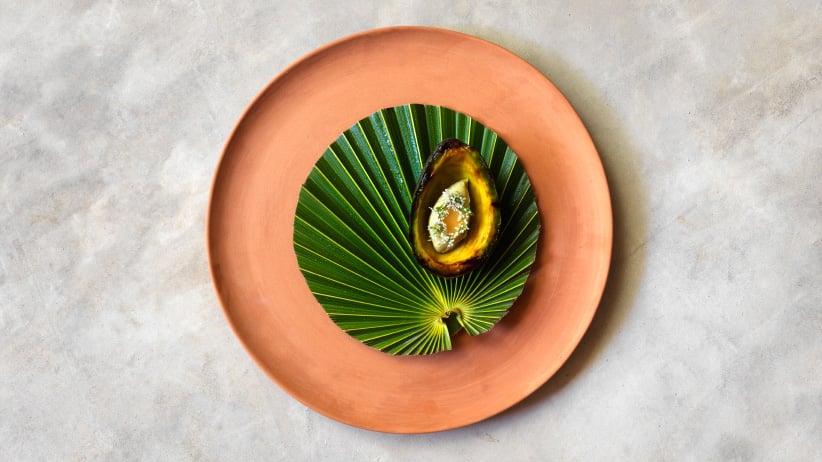 Zilber is also in charge of documenting Noma recipes newly conceived for the Mexican pop-up, as well as updating old ones from Copenhagen. So out of curiosity we pressed him for details on the complexity of preparation lurking behind our simple-looking plate of octopus and pumpkin seed.

“How long is the recipe?”

“Eight pages,” Ziber replied cheerfully before bounding back across the sand and into the darkness, towards the open kitchen. The next day, he treated me to a look at it on his laptop: the octopus recipe had 14 sub-steps, and one of them began three months before service. And that should give you some clue as to why some 80 other chefs were back there with him, in order to turn out the set, 15-course tasting menu for 140 diners per night.

If you don’t know about Noma, you need grasp only this. Every now and then—maybe once a decade—a chef comes along who changes the way we eat. You can trace a decade or two worth of high-end obsession with the best Mediterranean ingredients served with simplicity back to Alain Ducasse, and maybe right back to that bowl of crudités with puréed truffle dip that he put on the menu at Louis XV at the Hôtel de Paris in Monte Carlo, which opened in 1987. And you can thank Ferran Adrià and his groundbreaking El Bulli for a decade or two of gels and flavoured air and other trompe l’oeils that followed in the ’90s and early aughts. And if you’ve ever stopped to wonder how it came to pass that over the past 15 years chefs the world over started abandoning their expensive imports of truffles and foie gras in favour of showcasing cod millet and cockles, sea buckthorn and lichen, and whatever other treasures were lurking, neglected, in their own culinary backyards, you can chalk it up René Redzepi. And, specifically, to a voyage of culinary discovery to the Faroe Islands undertaken by the young chef in 2003 as he prepared for launching Noma. For that foraging excursion that reverberated around the globe. 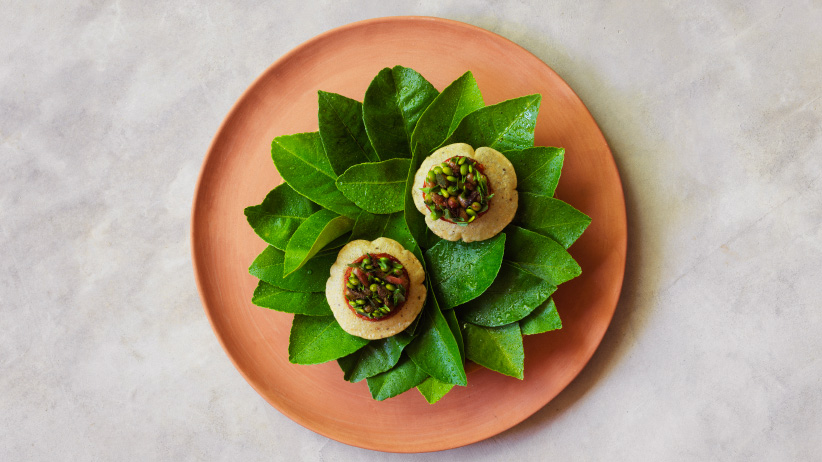 Noma opened in Copenhagen in 2004 and just six years later was as anointed the best restaurant in the world by Restaurant Magazine in its annual S. Pellegrino-sponsored World’s 50 Best Restaurants list. Then it won that title three more times, before closing in 2016 for a rethink, and a relocation as an urban farm, scheduled to open on Dec. 1, 2017.

Meanwhile, Redzepi and Noma have undertaken a series of journeys of culinary discovery on foreign soil. The first took place in London in 2012. More ambitious relocations followed in Tokyo, and then Sydney. Mexico was conceived to be the most elaborate yet; when the seven-week run of reservations became available for purchase last December, some 5,000 tickets priced at $US600 a pop sold out in under two hours.

Having purchased a couple, I should point out that once tax and pre-affixed gratuity were added to the equation, the price was really $US800 per seat, well over $1000 in our feeble currency. Extravagant, yes—but the experience was transporting, the setting magical, and each of the 15 courses an education. Some demonstrated luscious and unfamiliar local flavours (like shockingly rich escamoles, or ant larvae, loaded onto a miniature tostada, or the citric bite of a tamarind-dusted piñuela, or bromelia fruit). Others revisited familiar ingredients but rendered them exquisitely in exciting and previously unimaginable new ways (like a taco of supple and succulent suckling pig infused with coconut oil, or a spin on sopa de lima, reconceived with corn broth, edible flowers and lime granité. The next day, I could not stop thinking about the imaginative process that had delivered a split young coconut, its bowl loaded with Imperial caviar and thick cream—and a wooden spoon, with which to scrape the gooey, natural gel that covers the inside of the developing nut, to mix with the other two ingredients. 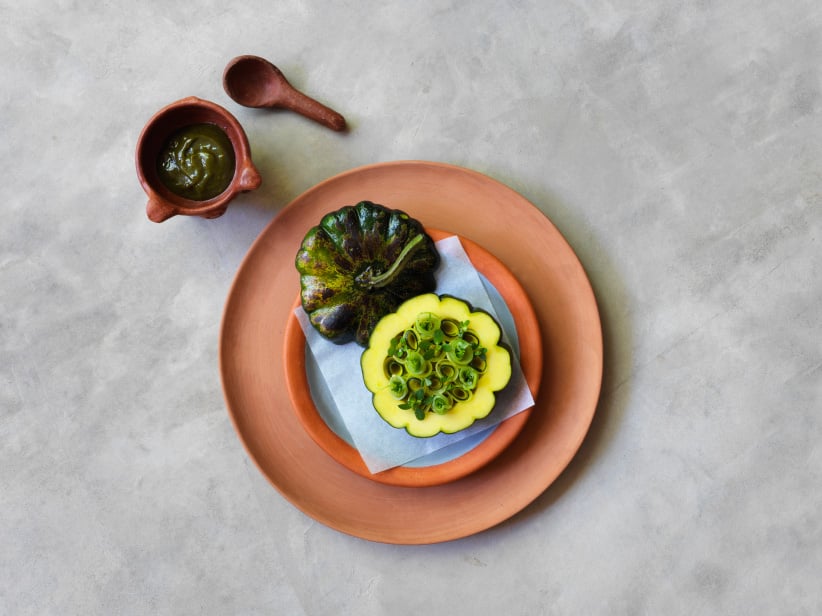 “Creating dishes mostly happens within the test kitchen,” Ben Ing, Noma’s Ottawa-born chef de cuisine, explained the next day, adding that the separate kitchen was staffed with six to eight chefs of its own. “Dishes go through a lot of phases. Items on this [Noma Mexico] menu have been through seven or eight tastings. The young coconut started with just cream. Then René said, why don’t we add some seafood element, like urchin. We started with that, and then it was caviar.”

Ing, who sports thick black beard and works in knee-high black and sandals, arrived at Noma after a long stint at 11 Madison Park, in Manhattan, in March 2014—just in time to read the letter of application from Zilber (and to confirm to then-head chef Daniel Giusti that yes, he had heard of a place called Hawksworth, in Canada). Zilber started the next month. And the two Canadians were soon thrust together, cooking on the same team, and dealing with the same profound workplace adjustments.

Ing recalls that “11 Madison was very Swiss. Everyone had classically trained backgrounds. Noma was definitely a shock. So many different techniques and ingredients and ways of seasoning things. And service is a beast. It’s not always so polished, the way things run…”

“I just remember thinking, ‘What the f— is going on?’ ” Zilber interjected. “Prep was prep, that was okay—then the first guests arrived, the gun went off, and everyone just started screaming and running around the kitchen, this very small room, at full throttle, and there were a million things happening all at once.”

At the table, though, chaos was far from our minds. We were instead awed by the kitchen’s apparent military precision. Each small course was rendered flawlessly, with never more than a minute or two elapsing between the time one dish was taken away and the next one arrived. The whole run took less than two hours. It was a tour de force and the meal of a lifetime.

With that behind them, when Noma Mexico wraps up at the end of May, both Ing and Ziber will return to the front lines for Noma 2.0. And beyond that, well, it’s encouraging to remember that ambitious young chefs are rapaciously acquisitive of knowledge and experience. And the takeaway from Noma is such that the restaurant itself has an alumnae tab on its home page cataloguing their new restaurants and conspicuous achievements. It is edifying to consider a future time when Ing and Zilber are on that list, with Canadian addresses.

“I think about it a lot—having my own restaurant,” Zilber enthuses. “Noma is amazing because, like all great restaurants, it’s helped to define a new paradigm in food. And me, personally, I think there are still unexplored paradigms out there. It’s something you think about, by nature of working here—all those things that don’t yet exist. I have a lot of work ahead of me here, I am nowhere close to done. But one day.”